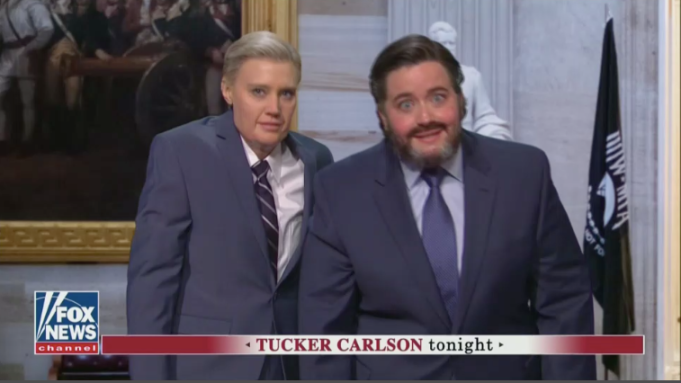 It was only about an hour after the Senate failed to impeach former president Donald Trump that NBC’s late-night sketch comedy show “Saturday Night Live” was back on the air, delivering its third show of the new year. Never one to miss a chance to weigh in on the political hot topic of the day, its cold open sketch responded to the impeachment trial via interviews on their version of “Tucker Carlson Tonight.”

Carlson, in this case, was played by “SNL” cast member Alex Moffat. He welcomed Kate McKinnon as Sen. Lindsey Graham, who called it “a great day for 30% of America” and said the trial was “offensive and absurd, like a friggin’ episode of ‘Rick & Morty.'” Aidy Bryant also appeared as Sen. Ted Cruz; Mikey Day portrayed Trump’s lawyer Bruce Castor; Pete Davidson was Michael Van Der Veen, and Beck Bennett was Sen. Mitch McConnell.

McKinnon-as-Graham also said, “The attack on the Capitol was a horrible thing, but just because the rioters yelled, ‘Fight for Trump’ doesn’t meant they meant Donald Trump. Could have been some real Tiffany heads, maybe even some Eric stans.”

Now that the trial is behind them, McKinnon-as-Graham was looking forward to moving onto issues with Hillary Clinton and “freeing beautiful Britney Spears,” which earned big cheers from the live studio audience.

Meanwhile, Bryant-as-Cruz noted how they met with the defense lawyers “to give them some very simple legal advice: ‘Stop’ and ‘Don’t.'”

Cutting to footage of Day-as-Castor making his case, he misrepresented himself multiple times, first saying he was the prosecutor, then the bailiff, then a bridesmaid before calling time on himself. Davidson-as-Van Der Veen came on screen next, saying he didn’t want to be there, that “this is the worst thing that’s been in the senate chamber in the history of a couple of weeks” and that he was going to call his own witnesses, after which he proceeded to mispronounce a number of women of color’s names, including Kamala Harris, but whether it was on purpose or out of ignorance he noted, “You’ll never know.”

After Moffat-as-Carlson brought on Bennett-as-McConnell, his final guest, he asked why he didn’t vote to impeach Trump.

“Everyone knows you cannot impeach a former president,” came the answers. “That’s why we should have impeached him before, back when I said we couldn’t.”

He continued to claim he does think Trump is “guilty as hell,” though, “and the worst person I ever met, and I hope every city, county and state locks his ass up. Oh god that felt good. I’ve been holding that inside my neck for four years.”

Of course later in the episode “Weekend Update” also commented on Trump, most notably with Colin Jost saying, “Like so many other men living in Florida, Donald Trump has once again escaped from justice.”

He continued to call the second impeachment trial the “dumbest” trial he has ever seen because “the jurors who were deciding the case were the ones attacked by the defendant, the trial took place at the scene of the crime and then, after the trial ended, one of the jurors who voted to acquit Trump ran out and said, ‘Someone’s got to prosecute this guy, he did it, this man belongs in jail!'”

Jost also said he felt bad for former vice president Mike Pence because “43 of his work friends were like, ‘Oh come on, Mike, they only tried to hang you. Stop being such a drama queen.'”

Michael Che commented on the riot footage from inside the Capitol that was shown during the trial: “But here’s a little Black history lesson for you,” he said, “just because there’s video evidence doesn’t mean you’re going to get a conviction.”