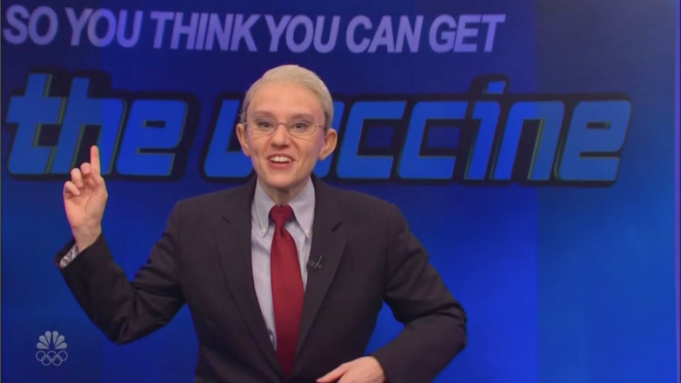 With the ability to get the COVID-19 vaccine varying from county to county, let alone state to state, “Saturday Night Live” used its Feb. 27 cold open to play on the average American’s ability to be kept safe through a Dr. Anthony Fauci-hosted new game show, “So You Think You Can Get the Vaccine?”

Kate McKinnon opened the sketch, which you can watch above, as Dr. Fauci, “America’s voice of reason and celebrity hall pass, for some reason,” and noted that while getting the vaccine shouldn’t be complicated, “Americans will only want to get it if it means someone else can’t.”

Heidi Gardner played the first contestant, a woman from Michigan who said she deserved the vaccine because she was an essential worker: “I do IT for the OnlyFans website, so I’m pretty busy.”

When asked if she had any pre-existing conditions, she said, “I have a pretty bad attitude, I’m allergic to dust, and I don’t know if this is anything but I have herpes.”

Obviously, she was disqualified as ineligible. Contestants who did not go home with the vaccine, McKinnon-as-Fauci pointed out would go home with consolation prizes including “a Pfizer visor.”

Ego Nwodim played the second contestant, a woman who wanted to be introduced as “so old, she’s not even kidding,” and when she came out she said, “I love hard candy and boy, do I stan going to church.” But she was only wearing a gray wig, not any aging-up makeup or prosthetics, and pretty much immediately she was called out for saying “stan.” She took off the wig, revealing herself as another “pretend granny.” But she wanted the vaccine because she has been talking to a guy for 10 years and “he’s only in town tonight. … My risk is that I may pop.”

She, too, was told she was not eligible, to which she replied, “On the second to last day of Black History Month?”

Melissa Villaseñor played a pregnant woman, but no one seemed to know if she could get the vaccine based on the current guidelines. McKinnon-as-Fauci said they were running low on Moderna but could offer a trial for the Kirkland vaccine that was developed by Costco, came in a needle almost as big as McKinnon and also came with a “24-pack of hot dogs.”

Bowen Yang appeared as a man from New Jersey who came out gingerly holding a cigarette and claiming he loved them. New Jersey residents who are smokers are currently eligible to receive the vaccine, but he couldn’t keep his ruse going for long: after claiming he loved everything about cigarettes, such as the “squishy part,” he coughed and left the stage on his own.

“Oh it is great to be back in New York City. I’m sorry, my arms are tired because I just flew back from Cancun, Mexico. But can you really blame a brother for wanting some sun?” Bryant-as-Cruz said before screaming new catchphrase “Freedom.”

The final contestant was Mikey Day as an octagenarian former army doctor and “world’s proudest granddad.” When he was told he would get the vaccine, he asked if he would get it on or backstage, to which he was told he had to make an appointment online. But because he didn’t know how to use his computer, nor had a “young person” who had “three straight days to press refesh,” it was “better luck next time” for him, too, in the end.

At the end of the sketch, though, it was “first come, first stab” for vaccines for anyone who could get to the nearby CVS, which McKinnon-as-Fauci announced had just lost power.