Richard E. Grant Has Just One Complaint About His ‘Loki’ Role: ‘Where Are the Muscles?!’ 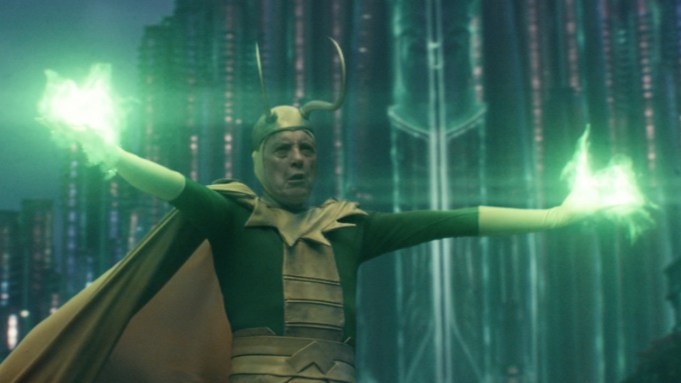 There’s an old saying in Hollywood: You haven’t truly lived until Richard E. Grant causes you to bend over in laughter by pointing out his — and your — physical shortcomings.

At least, that’s what happened when the Oscar-nominated character actor — from 2018’s “Can You Ever Forgive Me?” to 2001’s “Gosford Park” to 1987’s “Withnail & I” — spoke with Variety about his scene-stealing turn on last week’s episode of the Marvel Studios series “Loki.” The penultimate episode of the season finds Tom Hiddleston’s titular god of mischief trapped in the Void, a limbo plane of existence that plays home to dozens of other variant Lokis who’ve been pruned by the Time Variance Authority. Along with Grant’s Classic Loki (who escaped death by living alone on a remote planet), Hiddleston meets Kid Loki (Jack Veal), Boastful Loki (Debbie Oparei), and Alligator Loki — basically, an alligator wearing Loki horns who communicates via a series of growls that Classic Loki interprets. By the end of the episode, Classic Loki reclaims his glorious purpose and sacrifices himself to allow Loki and Sylvie (Sophia Di Martino) enough time to tame Alioth, the gargantuan monster that reigns supreme inside the Void.

Almost all of the Loki variants have some kind of corollary from the Marvel comics, and Grant’s is no exception: As his name implies, Classic Loki’s costume is meant to be an homage to Loki’s original green-and-yellow get-up illustrated by Marvel legend Jack Kirby. But as Grant made abundantly clear, there was a critical detail of Kirby’s vision that he felt was missing from his costume, and he is not afraid to express his displeasure about it. Grant also discussed how he drew on the pandemic for inspiration to play Classic Loki’s existential despair, and his surefire pitch for a spin-off series starring him and another scene-stealing Loki variant.

Once you were cast in “Loki,” the internet deduced pretty quickly that you were going to be playing an older version of Loki.

Well, I’m the oldest person on any film unit that I’m on now, so not rocket science to work that one out, Adam. [Laughs]

Well, you could’ve played any kind of character, but as an older version of Loki, did you feel like you had a Loki quality that you were bringing to the production?

Well, I had been following Tom Hiddleston since I first saw him in a production of “Othello” with Chiwetel Ejiofor and Ewan McGregor decades ago in London. And met him backstage and I said, “You’re so extraordinarily talented, you’ll have an enormous career. I can’t wait to watch and see what you do” — and indeed he has. We had [said] jokingly, just with each other down the years socially, that because we have a sort of vague similarity in the way that we look at our physiques, that we can play father and son in something. So when at the beginning last year before lockdown, I got this offer to play classic old Loki, I thought, “Aha, finally, this is what we have been joshing about all the all this time and it’s now come to pass.” So that’s how I understood it.

So talk to me about the costume. It’s based on a classic Loki costume from the comic books, but what did you think when you first laid eyes on it?

I said three words: “Where’s the muscles?” They said, “What do you mean, ‘Where’s the muscles?'” I said, “Your costume design drawing and Jack Kirby’s original illustration in the ’60s comics — this guy had muscles!” I said, “You’ve cast the guy who’s got no muscles.” And I can see you’re enormously Stallone’d yourself, Adam. And I said, “Where are the muscles?!” And they said, “No, you don’t need muscles.” “Then how can I fight [Alioth] if I’ve got no muscles?! He’s got muscles! He’s in a muscle suit! That’s the whole point! Otherwise, I’m just, you know, a Kermit in tights!” And they said, “Don’t worry about it. Use your magic as Loki.” So I was very, very aggrieved that I wasn’t allowed to have a muscle suit — and I still am! When we do the offshoot of “Classic Old Loki and Alligator Dot Com,” I am gonna have muscles, let me tell you now!

Okay! What was it like working with Alligator Loki? He’s quite the scene stealer.

He was riveting. He was, to me, sort of stuffed cushions that have been sewn together in a sort of vague alligator shape. So he was a featherweight version. But at least he was actually there. He wasn’t a tennis ball on a stick. [Laughs]

Was there anybody that was growling on set as he would? Or did you have to work that in your own imagination?

No, we had to just imagine that. I loved the fact that I was the only one with the Dr. Doolittle talent for being able to understand and interpret on Alligator’s behalf.

Your character’s arc on the episode culminates with him conjuring an enormous imaginary Asgard. How does one, as an actor, get into a place where one can make that happen?

You keep thinking if the costume department had given me muscles, it would have helped. So they had huge, turbine, airport-size, jumbo jet–like wind machines that were blowing hell for leather. And then I had a mark on a camera crane that was moving around in the ceiling of the vast studio in Atlanta [as Alioth], and I followed that. I was getting instructions through an earpiece of, “This is where [Alioth] is, and this is what’s happening now.” So, you know, I was giving my glorious purposes as best I could and then laughing in the face of my imminent, catastrophic death. So that’s what it involved. Having the wind for real was great. It wasn’t a hair dryer just blowing, or strings pulling my cape back. These were full-on wind machines that I had to shout against. So it was exhilarating.

Did they give you a sense of what the story had been up to that point? Or did you just kind of come in cold?

No, I came in cold and I was only given Episode 5 to read, which was the episode I was in. Then on my first day, Tom Hiddleston came in and saw me before I started working, and because he’s a walking, breathing, talking Loki-pedia, he gave me the sort of Norse background of the stuff and gave me his take on what was going on. There was a lot of, “Oh, yeah, no, great Tom!” And I kept thinking, “God, I’ve got to be the older version of this guy. I don’t stand a chance, and certainly not in a muscle-free-zone Kermit outfit.”

Then I zoned in on this speech that [my character] has. Unlike Tom’s version, who says he’s the god of mischief all the time, when [my character] says he’s the god of the outcasts, I thought, “Well, I’ve been in two weeks quarantine…and stuck in a hotel room not being able to speak to anybody or have any interaction.” When he talks about being god of the outcasts and stuck on these planets for so long, that feeling that we all have of longing, unless you’re on hermit, to have contact again, that is the key to plugging into who classic old Loki was. He’s prepared to give himself up and be arrested by the TVA and then finally his sacrifice himself to [Alioth] — I get that. I’d do that.

Loki is a survivor, as that episode and the whole series make clear, and he’s also very good at resurrections…

And I am a 64-year-old actor who has been in show business over 40 years. I know all about just surviving and having many resurrections along the way. I know all about this stuff, believe me. I’m a man who was in “Hudson Hawk”! Need I say more? A career-ending moment in 1991, oh my god! And I’m still here.

So should we hope to see you again in this role?

Yes! God, yes, I hope so, but I’ve not heard anything. But I think that, you know, “Alligator and Classic Old Loki Dot Com” should be a new duo of sub- sub- sub- sub- sub-series going on, I don’t know, Planet Zorg at 4 in the morning. I’m up for that!