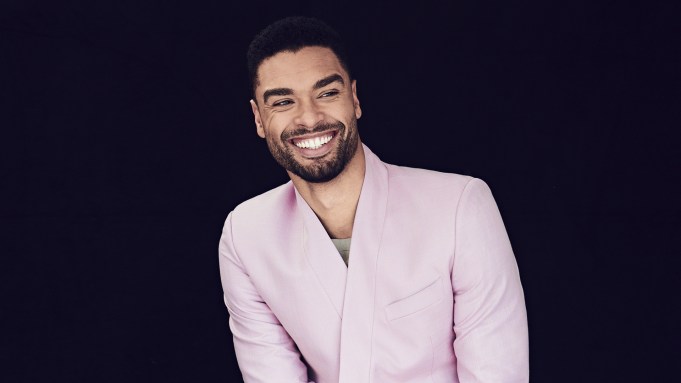 For the small percentage of the population who didn’t get to know Regé-Jean Page on “Bridgerton” (or “Roots,” “For the People” or “Sylvie’s Love”), they were likely introduced to the actor via “Saturday Night Live.”

The actor hosted the Feb. 20 episode, showing off his comedic chops with the Olivia Rodrigo-inspired ‘Drivers License’ sketch and a “Bridgerton” intimacy coordinator spoof (a sly nod to the show’s steamy sex scenes). Page also revealed his singing skills, with a quick rendition of “Unchained Melody” during his cheeky monologue.

The moment was also significant because, up until then, most of Page’s interaction with the “Bridgerton” fandom had been online (yes, he’s familiar with the meme accounts like @thedukesspoon — though they’re banned from his family What’s App conversation), thanks to the pandemic lockdown.

Going into the show, Page reached out to his friend “This Is Us” star Sterling K. Brown for advice. The actors met at a 2016 Emmy party and have since become close, with Brown taking on the role of a pseudo-mentor to the rising star. The veteran actor says it was a bit of a full-circle moment, since Brown circling up with his friend Charlie Day before hosting in 2018.

His worries assuaged, Page ultimately dove right in for the opportunity to host the sketch show. “SNL is all about discovering the unknown, the unexpected,” he says. And from the time he arrived at 30 Rock’s Studio 8H, the entire experience was a whirlwind.

“We went through, like, 40 scripts in a day to whittle it down to the nine that are in the show. You don’t have time to be precious about anything,” Page says. “You’ve got to trust the gut as you go, to not understand why something’s funny, but just know that if you throw something out, Kenan [Thompson] will bounce something else off you. What a privilege that is to be like, ‘If I just throw this out Kenan will bounce something back at me!”

Once it was officially showtime, Page was in for an even bigger rush, which he compares to both playing a rock show (the actor used to be the purple-haired lead singer of a punk band) and performing Shakespeare at the Globe Theatre in London, where there’s the instant gratification of getting feedback from the audience.

“That was the most fun thing about that night: having a two way conversation, in the room, with a bunch of people who don’t know what you’re going to do, who are waiting to be delighted by whatever unexpected thing you throw out,” Page says. “That’s electrifying.”

The SNL stage is also built similarly to the Globe, where half the audience stands around the foot of the stage, and are called “groundlings,” while the audience seated in the tiers above them are referred to as “the gods.” As an actor, Page explains, this kind of setup raises the stakes. When the audience is on their feet for the duration of a play, he notes, “it’s not like sitting in a theater, you want to be entertained.”

So, when it comes to entertaining, Page has learned that anything goes, throwing out one of the so-called “secret rules of Shakespeare:” “Never pass up a dick joke.”

“They just work,” he says with a laugh. “Don’t be afraid — if we’re getting more pretentious — to be bawdy. Don’t be afraid to shock people or be unexpected. And you have to hit both the low humor and the high humor — hit my intellect, but hit the gut, and you’ve got to do both at the same time.”

Learning to embrace “the comedy of tragedy,” as part of his theater training from the Drama Centre in London, the National Youth Theater and the Identity School of Acting, ultimately paid off for “SNL.” From there, his rock star experience kicked in.

“I was playing with the audience between takes. And the ‘SNL’ crew was like, ‘OK, we see you,’” Page admits. “I’m like, ‘Dude, they’re right there. If you were playing a rock show, you don’t just go quiet and tune your guitar between songs. You have a little bit of chat, a little bit of banter.”

The bit of back and forth meant the audience was warmed up to play when it was time for the sketches, Page suggests.

“It’s always about where you give,” he says. “If you give the audience something, they give you something back. If you fall into that feedback loop, then suddenly everyone’s doing everyone else’s job for them, life is easy, and we’re all just gonna have a good time.”

Page is being modest, because anyone who watched the episode can attest to the fact that the decibel level of that audience’s hoots, hollers and screams equated to more than just a “good time.” In fact, longtime “SNL” head writer Colin Jost marveled at the level of excitement the audience exhibited for Page during an appearance on “Ellen.”

“It was a full, like 90s ‘TRL’ audience that we had. And, by the way, we have small [audiences]. They’re like 25% capacity,” Jost said, as DeGeneres noted that the audience wasn’t quite that loud for K-pop supergroup BTS.

For all the hubbub happening around him, Page points to working with Thompson (the longest tenured performer on the sketch show and a TV icon, especially to thirty-somethings like him, who grew up watching the actor on “All That” and “Kenan and Kel”) as the ultimate highlight.

“The first time Kenan laughed at a joke I made, it was like, ‘Yes, now, I have made it,’” Page says, beaming at the memory. “With the greatest respect to 82 million [households who watched ‘Bridgerton’], when Kenan laughed, I got a very unique feeling. It’s cool to step on stage with your heroes.”