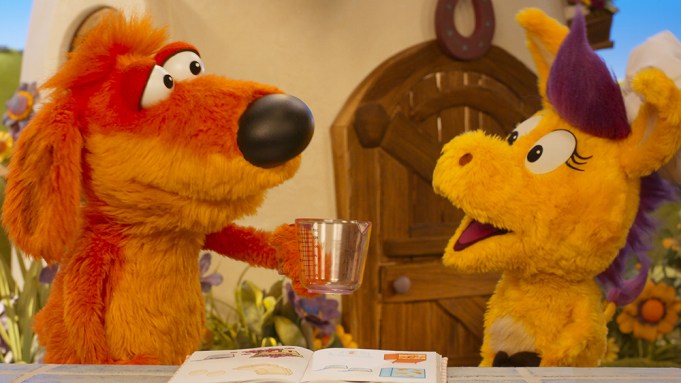 Classic characters from “Mister Rogers’ Neighborhood” are being reimagined in the new children’s series “Donkey Hodie” from Fred Rogers Productions and Spiffy Pictures that premieres today, Monday, May 3, on PBS.

The series follows the original puppet’s precocious namesake granddaughter whose big ideas sometimes get the best of her, but, with the help of Grampy and her friends, she learns to keep on trying. Each half-hour episode features two 11-minute stories.

The idea for the show started with the folks at Fred Rogers Productions. “We were looking at a list of character names from ‘Mister Rogers’ Neighborhood’ and Donkey Hodie was so funny, it made us laugh,” chief creative officer Ellen Doherty recalls. “An idea started percolating about a preschool show about a little donkey with big dreams and the idea of perseverance and grit, and how apt that is for preschoolers who are little kids with really big feelings. This just felt like a great vehicle to talk about persistence.”

The Fred Rogers team, which is also behind the animated PBS show “Daniel Tiger’s Neighborhood,” another “Mister Rogers” spinoff,  started developing the “Donkey Hodie” show as an animated project. But after working on it a few months, they decided on a different approach. “It felt right for the show to go with puppets,” Doherty explains. “Because when I think of little kids with big feelings, I picture Kermit the Frog flailing his arms. The physicality of that and how you can do that with a puppet. It’s a completely different experience than animation. To make the show its best self, frankly, it felt like this was what we needed to do for this concept, this character. It also ties really nicely back to the history of it with Fred Rogers on ‘Mister Rogers’ Neighborhood.’”

Once it was decided to go with puppets, Fred Rogers Productions turned to Spiffy Pictures to take the idea and run with it. Spiffy had the right mix of children’s storytelling and puppet mastery chops for the project. Spiffy is headed up by brothers David and Adam Rudman. David Rudman is a renowned Muppeteer (Cookie Monster, Scooter, Janice and Beaker) and Adam Rudman is an Emmy-winning writer (“Sesame Street,” “Tom & Jerry,” “Scooby-Doo”). They were just finishing up the third season on their animated kids show “Nature Cat” and were ready to try something new.

“Once we heard the name ‘Donkey Hodie,’ we started laughing and we were in from the beginning,” Adam Rudman remembers.

“We loved that idea of doing a puppet show,” David Rudman adds. “We were able to work with the Fred Rogers company and redevelop these characters, redesign them, figure out new personalities that worked for our show.”

The Rudmans are co-creators and executive producers of “Donkey Hodie.” David Rudman directs and is the puppeteer of Grampy Hodie and Bob Dog, while Adam Rudman leads the writing team.

The Rudmans and their Spiffy team did a lot of research into the classic “Mister Rogers’ Neighborhood” characters to give them new life in their fanciful land of Someplace Else, plus they’ve added new characters in the mix.

“We started to discover these really obscure characters that not a lot of people knew about: Purple Panda, Bob Dog and Harriet Elizabeth Cow, and a lot of other characters that weren’t in the main tier of ‘Mister Rogers’ Neighborhood,’” David Rudman says. “They weren’t King Friday or Daniel Tiger. They were ones that appeared every once in a while. And something about these characters spoke to us.”

Adam Rudman likens it to shows in the “Star Wars” universe like “The Mandalorian,” in which side characters have their stories told. “It’s like, take this secondary character and create this storyline,” he says. “[‘Donkey Hodie’] is our own little ‘Mandalorian.’”