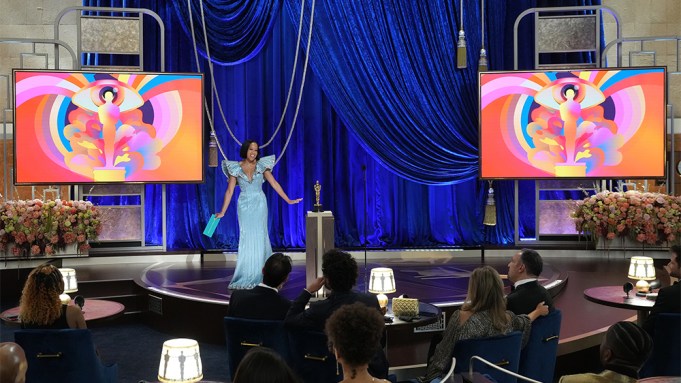 After strutting into the Oscars framed by a pointedly cinematic aspect ratio, the Los Angeles sunlight streaming in through Union Station’s windows, opening presenter Regina King took the stage of the most unusual ceremony in recent memory and promptly tripped on her gown. Steadying herself with a broad smile, the consummate professional shrugged and laughed, “live TV, folks!” Despite the show’s many attempts to meet these extraordinary times with a markedly different approach, the Academy Awards is, after all, still a live awards show at its core. Deviating from the genre’s formula can only do so much to alter its DNA. But watching this 93rd edition navigate a pandemic environment to deliver something unusual was nonetheless a fascinating exercise in rising to the occasion where necessary, and tripping on its gown when changing things for change’s sake.

No matter how well produced the show was, the lingering memory from it may well be the short-sighted decision to close the show with the best actor category in the clear hopes of concluding on an emotional note with a posthumous winner, Chadwick Boseman, long the favorite in the category for his work in “Ma Rainey’s Black Bottom.” Instead, the prize went to an absent Anthony Hopkins for “The Father,” ending the night on on an abrupt “huh?” instead of the moving swell of grief producers appeared to bank on.

In the weeks leading up to the ceremony, the Oscars creative team was adamant that it wouldn’t look like what’s become expected for awards shows in a year that was anything but. There would be no Zoom speeches, no lingering shots on grimly masked people, no nominees beaming in from their low-lit living rooms in rumpled sweatshirts. Directed by Glenn Weiss and produced by Steven Soderbergh, Jesse Collins and Stacy Sher, the 93rd annual Academy Awards ceremony on ABC took pains to avoid the traps that other pandemic-era awards shows fell straight into.

Gone were the embarrassing dial-up mishaps of the Golden Globes and the looming wall of Zoom boxes of the Emmys. Instead, the logistical calculations the Oscars made to stage a glittery show without stuffing as many stars into the Dolby Theatre paid off, making this event — the entertainment industry’s most overtly glamorous of the year — seem like an intimate affair.

Shifting from the Dolby to Union Station, the historic downtown Los Angeles train station that allowed for more of a hybrid outdoor/indoor vibe to adhere to COVID-19 safety protocols, immediately made for a distinctly different vibe than ceremonies past without losing much of the event’s traditional elegance. The red carpet took place amid cocktail party-style couches, allowing nominees to gather outside instead of in a lobby out of view of most cameras. Once inside, nominees sat in plush booths with lamps set atop their individual tables, making the Oscars look more like a cabaret than a grandiose awards show. In its concerted effort to scale the show down, the evening achieved an intimacy that, while forced by the circumstances, felt exactly right.

More confusing were the show’s attempts to shake things up in ways that had nothing to do with what had to be done for safety’s sake. With no host and no clips beyond the major film categories, the “ensemble cast” of presenters — the Oscars’ wording, not mine — were tasked with reciting an incredible amount of copy. It quickly became clear over the course of the night just how few people of Hollywood’s most famous and lauded tier are on King’s level; not many of her fellow “cast-members” could match her deft balance of gravitas and amiable charm. The major exception to this rule was comedian Lil Rel Howery who, despite being relegated to the red carpet and a late-breaking trivia round that bafflingly appeared with just 15 minutes left in the planned broadcast, made a solid case for why he maybe should’ve hosted the entire thing.

The immediately controversial choice of eschewing clips for presenters sharing personal facts about nominees’ journeys to this moment was an interesting idea that ultimately worked more in theory than in practice — especially in a year when many of the nominees come from films that could’ve used the extra promotion to an ABC audience that might not already know them. And while it was undeniably less stressful to watch speeches after realizing that Questlove wasn’t about to play anyone off, I would’ve taken a few shorter acceptances if it meant that the performances of the original song nominees could have been featured in the main show instead of sporadically in the second half of ABC’s five-hour red carpet pre-show. Do yourself a favor and find them now: H.E.R.’s blazing performance of “Fight For You” from “Judas and the Black Messiah” and Molly Sandén’s rendition of “Eurovision” standout “Husavik” from the actual tiny Icelandic town of Husavik were particularly stunning.

It was also wild to realize that best director would happen before the halfway mark, and even more surprising still when the best picture coronation didn’t close out the show. When Boseman lost to a photo of Hopkins, who won his second Academy Award in absentia, it was both genuinely shocking and completely absurd. The Oscars producers should know better than most that no win is ever guaranteed.

It makes sense that this year’s Oscars team would want to take creative swings while and where it could. Shifting the evening’s physicality did wonders to both underline the singularity of the circumstances and create a fittingly distinct atmosphere. The fact that it pulled off so much at a time when every single human interaction requires forethought is a feat that, should it prove to have been safe for participants, is undoubtedly impressive. And yet, it’s telling that the adjustments that didn’t work had nothing to do with the pandemic, but the show’s insistence on upending its own order for the sake of it. Audiences for traditional awards shows might be dwindling but rearranging the metaphorical furniture isn’t the compelling twist that is going to bring them back.