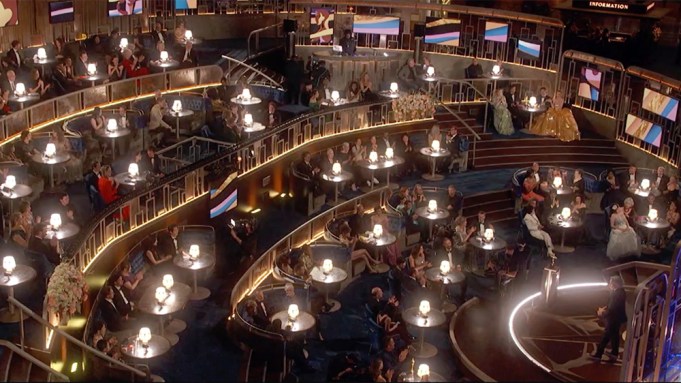 The 93rd Academy Awards ceremony, broadcast live from both Union Station and the Dolby Theatre in L.A. on ABC, hit a staggering low.

Per Nielsen Live+Same Day preliminary national numbers, an average of 9.85 million viewers tuned in on Sunday evening to watch a more intimate and stripped-down version of the Oscars in the midst of a pandemic. That’s a 58.3%, 13.75 million viewer drop-off from last year. The Academy’s third host-less show in a row scored a 1.9 rating among adults 18-49 in the fast national ratings, a 64.2% dip from 2020.

For comparison, last year’s ceremony garnered a 5.3 rating in the key demographic and 23.6 million viewers per the night’s time-zone adjusted fast national charts. The Oscars in 2019 delivered a 7.7 rating in adults 18-49 and 29.6 million viewers. While up 12% from 2018, that viewership figure represented the second-smallest audience ever for an Academy Awards telecast at the time. 2018 delivered the previous smallest viewership tally with 26.5 million viewers.

Given that awards shows this year have been plagued by production limitations and the overall effects of COVID-19 on the Hollywood landscape and entertainment consumption trends, news of the record lows in both metrics is no surprise. For instance, the 2021 Golden Globes drew a mere 6.9 million viewers and a 1.5 rating among adults 18-49, and the previous year’s ceremony dipped 2% in 2019 to an eight-year viewership low. Like the Academy Awards, the 63rd Annual Grammy Awards, hosted by Trevor Noah, was the lowest-rated in Grammys history, plummeting by nearly 53% compared to 2020’s show. Pandemic or not, awards show numbers, in general, have been in decline over the past few years.