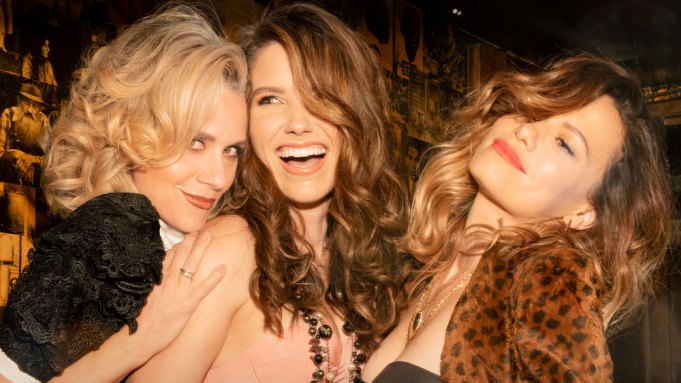 “One Tree Hill” stars Sophia Bush, Hilarie Burton Morgan and Bethany Joy Lenz are taking fans down memory lane with their new iHeartRadio podcast “Drama Queens,” which recaps all of the onscreen drama from the show’s 187 episodes and provides behind-the-scenes insight from the women behind the characters of Brooke Davis, Peyton Sawyer and Haley James Scott.

But for the “Drama Queens'” next episode, the trio will add one of Tree Hill’s finest to the conversation.

“Lee Norris joins us first to talk about what it was like to literally be the tentpole of basketball on our show, Marvin McFadden,” Bush tells Variety exclusively.

“We truly couldn’t have imagined having anyone else come on first,” she explains. “He was like the second person we called after speaking to each other. So, we’re so, so excited. It’s so fun to reminisce with him and to kind of get the gang back together; it feels really good.”

Norris appeared as Marvin ‘Mouth’ McFadden in 171 episodes of the teen drama’s nine-season run, and joins the podcast as the stars unpack “One Tree Hill’s” third episode, titled “Are You True?” which originally aired in Oct. 2003.

Burton Morgan agrees that having Norris as their first guest was a “no brainer.”

“Lee has been a true blue friend to virtually everyone in our cast, and has been there since day one of the pilot,” Burton Morgan says. “On top of that, he has worked with so many of us on other projects, so he is literally the tie that binds all of us. As a real North Carolina boy, Lee probably best embodied what the Tree Hill kids were representing. And he’s dangerously fun. Like… pee your pants laughing on a hotel floor at 2 a.m. kinda fun.”

Plus, Lenz notes that having one of their male cast mates on the podcast presented an important view of the filming experience.

“It was valuable for us to get a perspective from someone who also was a part of ‘One Tree Hill’ from day one, had been in Hollywood from childhood and knew the traps and cliches we might all fall into, and also, as a young male, would have experienced his time on the show differently,” Lenz says.

In an exclusive clip from the episode — which debuts on Monday at midnight — Norris, Bush, Burton Morgan and Lenz reminisce about their favorite memories from filming the series in Wilmington, N.C. Burton Morgan explains that Mouth represented a very important part of the audience watching the show — those viewers who weren’t the captain of the basketball team or cheerleading squad. But, it’s important to note that the character had game when it came to the ladies.

While recounting Mouth’s romantic experiences on the show, the trio discuss the revelation that Mouth was also a really good dancer — which came from the fact that Norris was known for showing off his moves on nights out.

“I’ve heard you talk about this on the earlier episodes, we saw pieces of ourselves start to be worked into the characters,” Norris explains.

The trio then reminisce about nights out at the clubs in Wilmington and how Norris and Bush bonded over their love for “Get Low,” from Lil Jon and the East Side Boys (feat. Ying Yang Twins).

“We’d be like across the like bar or whatever, and if this song would come on,” Norris begins, as Bush cuts in. “It was like the Red Sea would part, because Lee and I would be screaming, running toward each other, like some weird drunken version of a slow-mo love moment in an 80s movie. And we just hit the middle of the floor and like we’d get the whole bar dancing.”

The story is exactly the type of cute anecdote “One Tree Hill” fans have come to expect from “Drama Queens,” where Bush, Burton Morgan and Lenz dish on what was actually happening behind the scenes of the show. The trio launched the podcast on June 21 and it has been an instant hit, with more than 2.5 million downloads of its first three episodes.

“I’m deeply grateful that all our fans have turned up the way they have,” Lenz says. “I thought we’d do well within our fan base, but I never dreamed we’d be at No. 1 all over the world for weeks on end. It’s a dream come true again. And we don’t take a second of it for granted.”

But the podcast isn’t only for die-hard Ravens fans, with a format designed to include the new audiences who are discovering the show for the first time on streaming platforms like Hulu.

“We’re working hard to keep the love and respect of our fans and to earn it from a new audience as well,” Lenz adds. “We all know how rare this is.”

In fact, the podcast has also afforded its hosts — who admit they haven’t watched the show in years — an opportunity to view their experience in a new light.

“I expected to have fun but mostly I thought I’d be cringing the whole time,” Lenz explains. “The experience memory in my body from filming that show was based on so many insecurities and personal trauma and immaturity. So, I thought I’d be fighting a lot of shame while rewatching.”

“To my great delight, however, it’s quite the opposite,” she continues. “Now that I’m a mother and older and wiser, I just love my young self and I forgive her for all her flaws and I just see a young girl trying her best. I’m proud of myself and that has been incredibly healing. That dynamic is at play in our trio’s friendship as well, and it’s just such a gift.

The “Drama Queens” podcast is available on iHeartRadio, Apple Podcasts and Spotify.