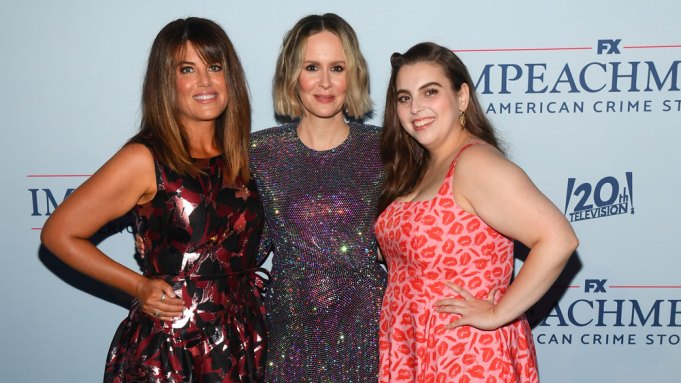 Lewinsky, a producer on the latest installment of Ryan Murphy’s Emmy-winning anthology series, posed for photographers on the red, white and blue arrivals carpet for a few minutes before skipping the interview press to head inside to a makeshift cocktail lounge. Chatter on the carpet was Lewinsky became skittish about being photographed in front of the façade of the White House that was erected on the step-and-repeat or the “Impeachment” posters, which also feature images of the White House.

“Impeachment,” which premieres on Sept. 7 on FX, chronicles Lewinsky’s affair with Pres. Bill Clinton when she was a White House intern in the late 1990s as well as independent counsel Kenneth Starr’s investigation of the president.

Inside the reception area, Lewinsky sat on a couch with friends before mingling with Beanie Feldstein, who portrays her in the 10-episode season. Sarah Paulson, who plays Linda Tripp, introduced Lewinsky to Elizabeth Reaser, who appears in “Impeachment” as a White House staffer who claims Clinton kissed her during an office meeting.

As waitstaff offered mini-bottles of champagne to guests, Lewinsky said, “I don’t drink. Can I get a cranberry?” Feldstein wasn’t drinking either, but was persuaded by Paulson to take a sip of her bubbly.

The evening didn’t include a screening of the premiere episode. Instead, FX chairman John Landgraf, executive producer and writer Sarah Burgess and executive producer Brad Simpson delivered remarks before the cast and crew gathered for group photo ops.

When Burgess praised Paulson’s work by saying she “will never move on or recover from Linda Tripp,” Lewinsky earned some laughs when she shouted, “Me either.”

About tonight. Spot the stars! @MonicaLewinsky and the cast of #ACSImpeachment… pic.twitter.com/zbj89m7OkV

On the carpet, Feldstein told Variety that she felt a “deep [and] profound sense of responsibility” to do right by Lewinsky. “This is a woman who the world has never understood for who she really is,” said Feldstein, who is also a producer of “Impeachment.” “It was my job to make them understand.”

She added, “Before we started shooting even, I said to her, ‘Monica, I’m your bodyguard. I will protect you.’”

Surprisingly, Murphy was a no-show at the celebration after being included on media tip sheets for the event. It turns out, he was across the country on vacation on Cape Cod.