Apple TV Plus and Mariah Carey released a trailer for “Mariah’s Christmas: The Magic Continues,” the holiday spectacular scheduled to debut globally on Dec. 3.

In the trailer, which can be viewed below, Carey is showcased on a golden stage in matching dress, surrounded by performers and a live band in a variety of festive outfits from top hats to red suits. The trailer also features Khalid and Kirk Franklin, as well as Carey’s 10-year-old twins Moroccan and Monroe.

“I can’t not celebrate Christmas with the world,” says Carey.

The holiday special, which is the second such collaboration between the singer/songwriter and Apple TV Plus, will include the first performance of Carey’s new single with Khalid and Franklin, “Fall in Love at Christmas,” as well as a new rendition of “Christmas (Baby Please Come Home).” “Mariah’s Christmas: The Magic Continues” will also feature an exclusive interview with Zane Lowe and Carey, along with her children, sharing favorite holiday moments and celebrating the beloved holiday classic “All I Want For Christmas Is You.”

The holiday event is executive produced by Carey, along with the director Joseph Kahn, Tim Case, Charleen Manca and Matthew Turke of Supply & Demand.

Netflix released a trailer for the second season of “Emily in Paris,” which launches Dec. 22. In Season 2, Emily (Lily Collins) is determined to focus on work, taking a French class to help her better communicate with her colleagues and clients. There, she meets a fellow expat who further complicates her life. The cast also includes Philippine Leroy Beaulieu, Ashley Park, Lucas Bravo, Camille Razat, Samuel Arnold, Bruno Gouery, William Abadie, with recurring guest star Kate Walsh and new cast members Lucien Laviscount, Jeremy O. Harris, and Arnaud Binard. “Emily in Paris,” which is created and run by Darren Star, is produced by MTV Entertainment Studios, Darren Star Productions and Jax Media. Watch the trailer below.

Roku released a trailer for “Zoey’s Extraordinary Christmas,” the holiday followup film to “Zoey’s Extraordinary Playlist,” which launches on Dec. 1. For the Clarke family’s first Christmas without Mitch (Peter Gallagher), Zoey (Jane Levy) is determined to still find ways to keep his traditions alive — while also juggling a new dynamic with her boyfriend Max (Skylar Astin), who developed the ability to hear heart songs at the end of the series’ second season. Alex Newell, John Clarence Stewart, Andrew Leeds, Alice Lee, Michael Thomas Grant, Kapil Talwalkar, Mary Steenburgen and Bernadette Peters all also reprise their roles in this film. Watch the trailer below.

Epix debuted a teaser for upcoming adventure series “Billy The Kid,” which is set to premiere in 2022. Tom Blyth stars as famous outlaw William H. Bonney aka Billy the Kid in the eight-episode season, which follows Billy from his Irish roots to his cowboy days on the American frontier, including his role in the Lincoln County War. Daniel Webber stars as Jesse Evans, Billy’s friend and fellow outlaw. Executive producers include writer Michael Hirst, Donald De Line for De Line Pictures, Darryl Frank and Justin Falvey for Amblin Television, Otto Bathurst and Toby Leslie for One Big Picture. “Billy The Kid” is a co-production between Epix Studios and MGM International Television Productions in association with Nordic Entertainment Groups streaming service Viaplay. See the teaser below.

Paramount Plus released a teaser for “South Park: Post COVID,” which will premiere in the U.S. on Nov. 25 and will also roll out in the Nordics, Latin America, Australia and Canada. The special will explore what happened to the children who lived through the pandemic as Stan, Kyle, Cartman and Kenny survived but will never be the same. In the teaser, which you can watch below, Kyle calls Stan, saying, “You remember when we were little? Us friends said we’d always be there for each other when things got bad.” Trey Parker, Matt Stone, Anne Garefino and Frank C. Agnone II executive producer, and Eric Stough, Adrien Beard, Bruce Howell and Vernon Chatman produce.

HBO announced that upcoming drama series “The Gilded Age” will premiere on Jan. 24 at 9 p.m. The nine-episode series is set in 1882 and follows young Marian Brook (Louisa Jacobson) as she moves from rural Pennsylvania to New York City to live with her old money aunts Agnes van Rhijn (Christine Baranski) and Ada Brook (Cynthia Nixon) after the death of her father. Accompanied by aspiring writer Peggy Scott (Denée Benton), Marian becomes entangled in a social war between one of her aunts and their neighbors (Morgan Spector and Carrie Coon). Additional cast members include Taissa Farmiga, Blake Ritson, Simon Jones, Harry Richardson, Thomas Cocquerel and Jack Gilpin. Executive producers include creator and writer Julian Fellowes, Gareth Neame, director Michael Engler, David Crockett and director Salli Richardson-Whitfield. Sonja Warfield serves as writer and co-executive producer. “The Gilded Age” is a co-production between HBO and Universal Television. See a new teaser and first look images below. 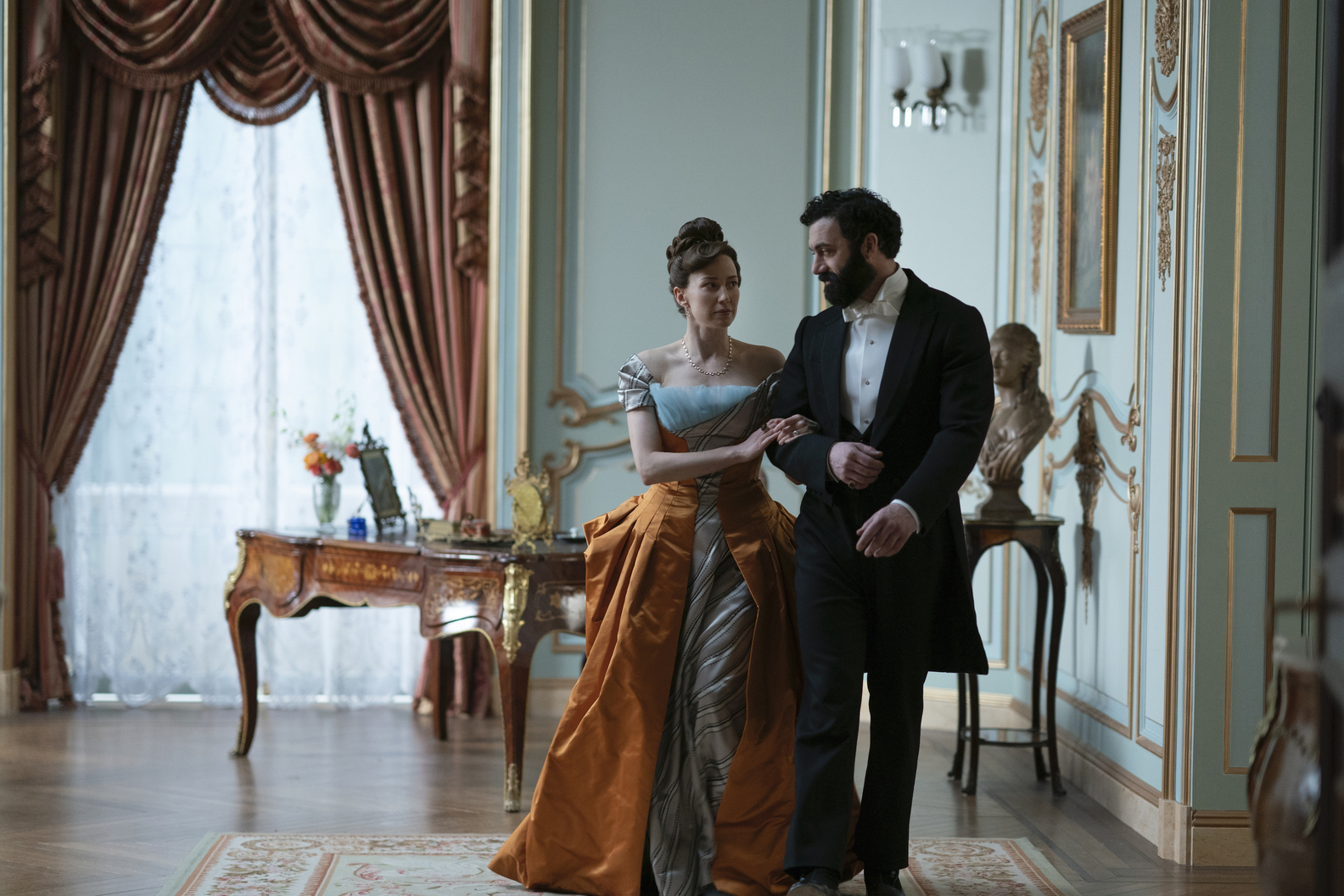 Netflix announced that “Queer Eye” Season 6 will launch Dec. 31. The new season will follow the ambassadors as they take on the Lone Star state and work their various skill sets to transform the lives of some deserving Texans. “Queer Eye” is executive produced by Jennifer Lane, along with David Collins, Michael Williams and Rob Eric for Scout Productions as well as David George, Adam Sher, David Eilenberg, Jordana Hochman and Mark Bracero for ITV Entertainment.

The Paley Center for Media announced the grand reopening of PaleyLand, which takes place on four floors of the Paley Center’s museum in New York and runs Dec. 4 through Jan. 6, 2022. The month-long celebration offers visitors a myriad of holiday activations including screenings of holiday classics like “A Rugrats Chanukah” and “A Charlie Brown Christmas;” holiday character meet and greets with Snoopy and Frosty The Snowman among others; a live Lego demo from LegoMasters; a Paley Express Holiday Train display and photo opportunities with Santa Claus and a seven-foot-tall menorah. Tickets are free for members; $20 for non-members; $16 for students, teachers, seniors, veterans and early responders and free for children 12 and under. New events will be added to PaleyLand throughout the month. To see the full schedule, visit their website.

Disney Branded Television has greenlit an original animated comedy-adventure series “Hailey’s On it!” The network that will be airing the original has yet to be announced. Slated to debut in 2023, the series follows Hailey Banks, a resourceful teenager on a mission to complete every item on her list of tasks in order to save the world, pushing herself out of her comfort zone along the way. Her tasks include sand-building competitions, wrestling a honey badger, eating a raw onion and facing her growing feelings towards her best friend Scott. Auli’i Cravalho voices Haily, Manny Jacinto voices Scott and Gary Anthony Williams voices Beta, a robot from the future. Devin Bunje and Nick Stanton executive produce, along with Howy Parkins as co-executive producer and supervising director Wade Wisinski as producer.

Starz ordered a “BMF” docuseries from executive producers Curtis “50 Cent” Jackson and Shan Nicholson. The eight-episode series will tell the story of the real-life Demetrius and Terry Flenory whose vision took them beyond the drug trade, into the world of hip-hop, and whose story is currently being dramatized on the scripted “BMF.” The docuseries will be directed by Nicholson and Chris Frierson, with Starz’s senior vice president of original programming, Alice Dickens-Koblin, as the executive overseeing it for the network. The docuseries is produced by G-Unit Film and Television and Alex Gibney’s Jigsaw Productions.

Participant announced that Chloé Zhao is set to executive produce the company’s upcoming limited series about Vincent Chin, the Chinese American man murdered in 1982, and the civil rights case surrounding his death. Participant will develop and produce the series through an exclusive agreement with the Chin Estate and Helen Zia, a journalist who became a national organizer and spokesperson for the Justin for Vincent Chin Campaign as well as the executor of Chin’s estate. Zhao, known for directing “Nomadland” and Marvel’s “Eternals,” will work on the project alongside Zia, Vicangelo Bulluck, Paula Madison and Donald Young. Miura Kite, Participant’s senior vice president of global TV, will oversee the series.

Simu Liu, Ruth Negga, Big Sean and Hit-Boy will appear on “The Tonight Show Starring Jimmy Fallon,” while Nick Offerman, Aunjanue Ellis and Alessia Carawill be on “Jimmy Kimmel Live!” Paul Rudd and Jared Harris will be on “Late Night With Seth Meyers.” Salma Hayek and Keith Urban will be on “The Late Late Show with James Corden.”