Behind the Scenes on ‘Malverde: El Santo Patrón,’ Telemundo’s Most Ambitious Project to Date (EXCLUSIVE) 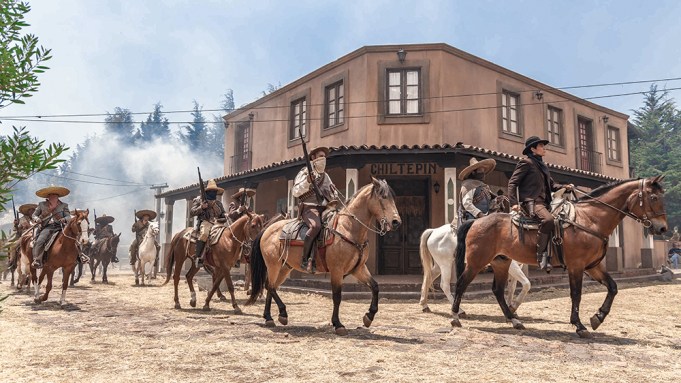 “Malverde: El Santo Patrón” follows a boy, born in Sinaloa, Mexico, in 1870, who will ultimately become a legendary figure and a religious icon. Malverde becomes a protector of the people, as well as the innocent, the poor and the dispossessed.

The above clip reveals what the 215,000 square-foot backlot built atop Mexican national park Cumbres del Ajusco looked like before and after, and what it took to recreate the world of the iconic Mexican character, set in the late 1800s and early 1900s. The town of San Blas de Baca consists of 11 buildings with 77 sets, designed by Telemundo’s Valeria Fińana and award-winning production designer Gloria Carrasco.

“To tell such an iconic story like ‘Malverde,’ we had to look far beyond the script and let the set design tell its own story by incorporating the textures, color, symbolism and props that represent the era,” said Marcos Santana, president of Telemundo Global Studios (and “Malverde’s” showrunner and executive producer), said in a statement. “This is one of Telemundo’s most ambitious productions, having worked with a team of more than 190 people to erect a complete town from the early 1900s with full-scale buildings that recreate the ambiance of the time. We hope our viewers feel truly immersed in the era as they enjoy the never-before-told story of the legendary ‘Malverde.'” Included in the numerous sets are a church, a bar, a market store, a hacienda, houses and an underground dungeon, all built meticulously to accurately reflect the architecture and mood of the time period.

Barroeta sat down with Variety to discuss the nitty gritty of developing and producing “Malverde,” the global pandemic that threatened to set it back and which sets stole her heart:

What were some challenges, if any, that COVID-19 posed on creating the show?

Well, producing is always a challenge, but under COVID circumstances, I can tell you that it’s been very, very hard because when we were about to start production in Mexico, we were having trouble assembling the team. Not everyone was willing to work but, some people were extremely happy to have a job because all productions had halted in Mexico. Telemundo was one of the first companies that decided to go back to production under extremely strict protocols. So, in terms of hiring, it was challenging in terms of timing because we kept moving, and we kept on having to push production because construction kept on needing to be paused, as well as when we had to design clothing, bring furniture or build furniture, bring props, etcetera. And, everyone was pretty vulnerable, especially when we were all in a building or on the backlot, because it was really hot in the day and really cold at night, and we were working 24/7. It was tough to deliver under these circumstances, especially because part of our protocol was making sure we were testing our employees, almost one to two times a week, depending on their duties. We were lucky enough to deliver the project on time, and also to have a healthy workforce.

Tell me about some of your casting decisions and what it was like to have the talent on set under these circumstances?

First of all, the character of ‘Malverde’ is an icon in Mexico, so having a Mexican citizen play him was always our intention. Obviously, any actor could perform well, but we thought that the audience would be happy to see one of their favorite celebrities — Pedro Fernández — play the starring role. He started his career as a young boy and has had a very fruitful career in television, and obviously as a songwriter and as a performer. So, our thought process was, ‘who is that person that can make the audience transcend and believe in what they’re watching?’ And Fernández is such an amazing actor, and a gentleman, and he has some of those qualities that ‘Malverde’ has. We always said we needed someone that could seduce a school teacher, but also the governor, and he is able to embrace that. And, you know, when you see the figures of ‘Malverde,’ he kind of looks like Fernández! When we approached him he had taken a bit of a hiatus from acting, but when he saw our presentation before negotiating he said, ‘Oh God if I want to return to TV, this is the kind of project I want to be on!.’ And, then we went from there.

Why do you think ‘Malverde’ is content that will appeal to your typical Telemundo audience base? Do you think it has the potential to reach a broader audience?

We wanted a project that was a combination of a story inspired by a real-life event, and a project in which we didn’t need to give great awareness to the main character because everybody (in Mexico) already knows him. When we were coming up with a marketing campaign, we noticed that ‘Malverde’ has been tattooed on thousands of people in the world, and that his image is everywhere in the country (of Mexico). When we put together this series, we wanted it to be a show that had a lot of action and a story that seemed real, because we’re bringing this legend and this era of Mexico to life. We made sure, then, that the production was of superb quality— it looks like a movie, and all of the music is reminiscent of the era! I think it could appeal to different people and a wider market because of the show’s production quality.