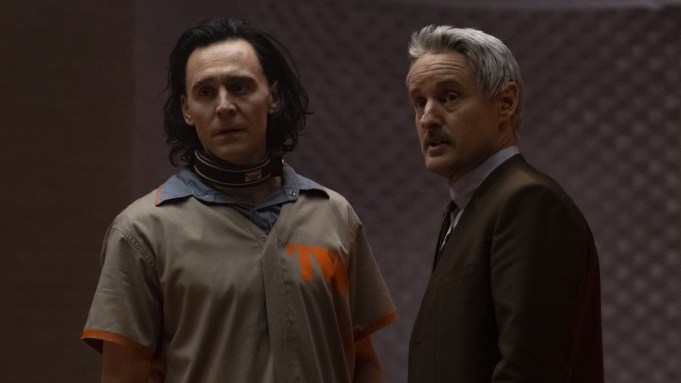 Prior to Marvel Studios’ “Loki,” not only had Owen Wilson never been in a superhero project before, but he’d barely ever done television: Just a two-part episode of IFC’s “Documentary Now,” a segment of Comedy Central’s “Drunk History,” and an uncredited cameo on “Community.”

“Loki,” however, is uncharted territory for the star of “The Royal Tenenbaums,” “Wedding Crashers” and the voice of Pixar’s Lightning McQueen. He plays Mobius, an agent within a sprawling entity know as the Time Variance Authority, an inter-dimensional bureaucracy tasked with the awesome — and formidable — responsibility of maintaining a single, sacred timeline and pruning away all “variants” that could lead to the multiverse. When Tom Hiddleston’s Loki used the Tesseract to escape from the events of 2012’s “The Avengers” — from within the events of 2019’s “Avengers: Endgame” — the god of mischief became such a variant, and draws the interest of Mobius and the TVA.

Wilson’s laconic persona might not be an obvious match for Hiddleson’s high-strung impishness as Loki, and yet it turns out that the two actors make for a highly entertaining pair. In advance of the show’s June 9 debut on Disney Plus, Wilson talked with Variety about what it was like to step inside the vast Marvel Cinematic Universe for the first time, how he navigated the tangled exposition his character has to deliver, and how his stint on “Documentary Now” inspired a crucial aspect of his character on “Loki.”

Before you were approached about “Loki,” if I had to ask you to tell me what you knew about the Marvel Cinematic Universe, what would you have said?

Yeah, let me try to reverse engineer now all that I do know. I was pretty much a blank slate, other than knowing, you know, certainly the Iron Man and the Hulk, and, you know, knowing the characters, and then Aquaman. But my sense of it, I guess, was a little bit like working with Pixar, that they seem to really exercise a lot of quality control, and like Pixar, everything that they release seems to really connect — not just with a big audience, but it seems to be pretty well received critically. That’s unusual.

You’ve said that you really focused on your conversations with Tom Hiddleston to understand your character and the show. Were you looking at the comics as well?

I wasn’t looking at the comics. I think maybe someone showed me some of what my character looked like. But it was really talking with the director, Kate [Herron], and reading the script, and then, you know, going over it with Tom Hiddleston before we started filming, and him explaining all this mythology and letting me ask questions about what Loki thought about this or that, his relationship with his brother. All that stuff ended up being really useful. I think there were even things that we would start talking about that then would make it into the actual scenes, because I would jot things down. Tom’s very articulate, and the way sometimes he explains something is very good and I would use that sometimes for Mobius, to parrot it back to him about himself.

You have a lot of dialogue as Mobius in the first two episodes in which you’re explaining what the TVA is, and the complicated rules of how they and time travel operates — how much do you feel like you had to fully understand that yourself, to deliver that kind of stuff?

You’re describing this to me and I don’t really have much of a memory of it, so I don’t know if I blocked it out of my mind the way you would math class. Because it is complicated, and it’s hard sometimes if you feel you’re saddled with a lot of exposition. I don’t quite remember it being too burdensome. We must have found a nice flow for it, where it was able to naturally work its way in to the conversations with Tom. Because I don’t remember it being too, ‘Oh god, now we’ve got to lay this out.’

Mobius talks a lot about fate, and the idea that Loki was always supposed to follow a set plan in his life and the Loki that you’re talking to deviated from that plan. As a writer, how much did you see this idea of a character deviating from his set plan fitting into how you think about storytelling?

That wasn’t one of the things that I really latched on to. It was more making things believable for myself. Sometimes there would be logic stuff that I didn’t quite follow, and Kate was always very good about letting us talk about it. And then if we had a solution that maybe made it better, the producers will always very welcoming if you have an idea. So, I always felt encouraged if I had any ideas. A lot of ideas were just the way Tom and I can relate to each other. That is just more a human thing than any plot stuff about the timeline with free will. It was more just sort of seeing somebody, their insecurities and vanities and trying to get them to follow your agenda. That usually makes for an interesting scene, where you have two people that are each jockeying for position. It’s sort of a cliche, but it was a little bit of a chess match.

Mobius is a unique character in the MCU in that he basically is just a regular guy who happens to be working in the most powerful entity in the universe. Did you feel that way yourself, being in a Marvel project?

Yeah. The way you’re phrasing it, it hadn’t occurred to me, but I think I did. He’s just very casually accepting of his position in the TVA, and he’s not thinking about it too much — the way he would. This has been his life. And I think I probably did that a little bit with the character, in being very relaxed and, you know, pretty sure of myself, even though I was entering the MCU. Mobius has a very fixed point of view and [he’s] kind of nonplussed by things. I think that that’s in the character and then people have, I don’t know, extrapolated that into, ‘Yeah, you didn’t know anything about the MCU, did you?’ Maybe I didn’t know as much as a really rabid MCU fan, but I certainly was aware of everything — pretty much.

I have to say that Mobius’ gray hair really works for you. How did you develop his look?

I’m glad we’re talking about this, because I really love the look for him. The gray hair in that crew cut, that really was just a couple of weeks before filming, that we talked about that. I actually had done something for “Documentary Now,” and I had worn some wigs playing sort of a guru. One look they had for me as an FBI guy, they had me in a kind of more gray hair crew cut. They didn’t really use it in the thing, but I thought that’s a good look, and so I had had that in my mind. When I suggested it [for “Loki”], they were kind of open to it. They worked on it. They were, I think, a little bit nervous, just because it’s different than maybe not what they were expecting, but it’s funny now, I think that they would all say that they couldn’t imagine Mobius not looking like that, because it really did become that character.