How ‘La Brea’ Created a Giant Sinkhole in the Middle of L.A. for NBC’s New Drama 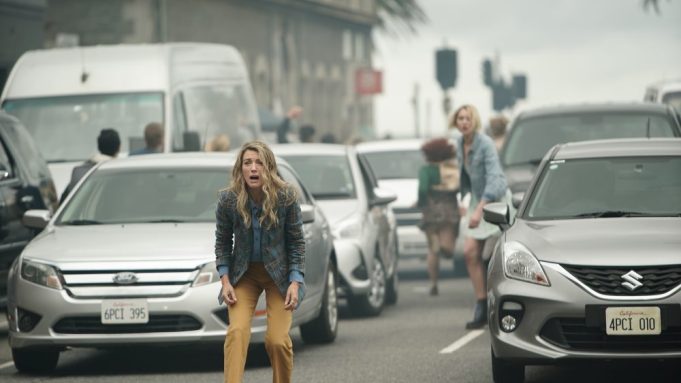 Ahead of the Tuesday night premiere of NBC’s latest drama, “La Brea,” the cast and crew shed more light behind the mysterious sinkhole in Hollywood.

The adventure series opens with fast-paced action when a massive sinkhole suddenly opens in the La Brea area of Los Angeles, pulling scores of people, plus cars and buildings, into its mysterious depths. Among those pulled in are Eve (played by Natalie Zea) and her son Josh (played by Jack Martin).

Shooting took place in both Melbourne, Australia, where VFX created realistic sets of the Wilshire Boulevard area, and in L.A. itself.

Series creator David Applebaum explains, “The origin of the idea was an image of a sinkhole opening up in the middle of Los Angeles and from there you start asking why does it open? Who falls in? Where do they go? We don’t yet know how deep it goes.”

Zea adds, “This family is pulled apart 50-50, one faction of the family is up in Los Angeles, the other faction is in the downstairs, as I call it.”

Martin, whose character is pulled into the primeval world of the “downstairs,” is among the group of strangers forced together after the disaster, trying to figure out where they are and how to get back home. He says of the series and sets, “It’s on a grand scale. Its adventurous and there are a lot of mysteries. Everything and anything can happen.”

VFX shots reveal the before and after of adding the sinkhole effect to the scene.

Andy Brown, who worked as lead VFX supervisor on the series says, he is most excited for audiences to see the sinkhole sequences “taking the characters back to a primeval world.” Brown explains that sequence was his toughest. “Creating a digital replica of a few city blocks stretching from the La Brea tar pits to the Petersen museum on Wilshire Boulevard and its destruction by a massive sinkhole [was a challenge]. The sequence involved shooting on a set of Wilshire Boulevard built in the Melbourne docklands, surrounded by a large green screen.” The team used drones and array cameras to shoot the stunts with cars and crowds. “An additional aerial plate shoot was shot in L.A. and an extensive lidar and texture shoot of the Miracle Mile block served as a base for our vfx work,” says Brown.

Veronica St. Clair, who plays Riley Velez describes each episode as “its own mini-adventure film.”

In addition to set extensions and invisible VFX work used to enhance the story, Brown teases, “There are many dangerous creatures that the characters encounter as well as environments and time portals.”