Marvel’s Kevin Feige on ‘WandaVision,’ ‘Star Wars’ and How the Pandemic Is Like Thanos’ Blip 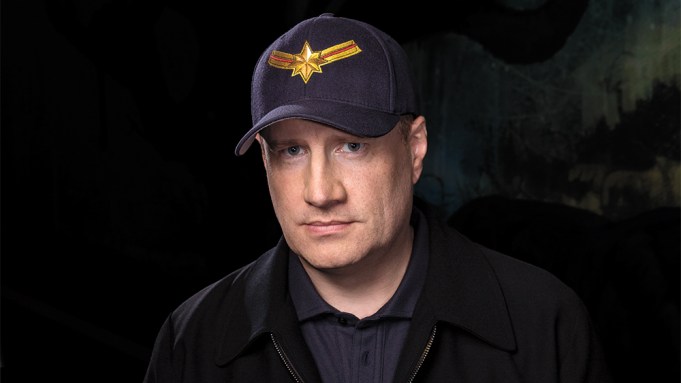 On Friday, Marvel Studios embarks on its biggest gamble since the debut of “The Avengers” in 2012 with the premiere of its first TV series for Disney Plus, “WandaVision.” While other Marvel divisions have ventured into series that are nominally part of the Marvel Cinematic Universe — like ABC’s “Agents of S.H.I.E.L.D.” and Netflix’s “Daredevil” and “Jessica Jones” — “WandaVision” is the first television venture produced by Marvel Studios proper, which is to say, by studio chief Kevin Feige.

Over 12 years, Feige shepherded the 23 feature films in the MCU to historic, industry-transforming success, as each movie knit together a larger tapestry of storytelling that culminated in 2019’s “Avengers: Endgame” and “Spider-Man: Far From Home.” The next phase of the MCU — feature films “Black Widow” and “Eternals” and Disney Plus series “The Falcon and the Winter Soldier” and “WandaVision” — were all supposed to debut in 2020. The COVID-19 pandemic, however, pushed all those titles into 2021, and forced the studio to shuffle its schedule and place “WandaVision” in the pole position for the future of the MCU.

That decision was at least in part logistical: “WandaVision,” starring Elizabeth Olsen as Wanda Maximoff (a.k.a. Scarlet Witch) and Paul Bettany as Vision, places its characters inside versions of classic American sitcoms like “The Dick Van Dyke Show,” “Bewitched,” and “The Brady Bunch,” allowing for a more TV-friendly production footprint that helped the show to finish first. But it’s also symbolic. “WandaVision” — from showrunner Jac Schaeffer and director Matt Shakman — is radically different from anything Feige and Marvel Studios have done before, and makes abundantly clear that the MCU’s foray into TV is not going to be business as usual.

Feige himself is busier than ever, with at least 17 feature film and TV titles scheduled over the next two years — not to mention his side gig producing a “Star Wars” movie alongside “Star Wars” feature projects from fellow superhero storytellers Patty Jenkins (“Wonder Woman 1984”) and Taika Waititi (“Thor: Love and Thunder”). Feige isn’t exactly eager to talk about venturing into a galaxy far, far away. But in his conversation with Variety over Zoom, the 47-year-old super-producer was candid about just how much of himself he’s poured into “WandaVision,” and how the pandemic is already reshaping his plan for the MCU.

What inspired you to tell this particular story with Wanda and Vision through the medium of classic sitcoms?

The answer for the show is because Wanda and Vision are great characters in the comics that we don’t scratch the surface of in the movies, played by actors who are so spectacular, and we’ve only scratched the surface of what they can do. Putting the spotlight on those actors playing those characters was the primary reason to want to make “WandaVision.” The way we made it is in large part because I spent an inordinate amount of time as a child watching TV and syndicated repeats of lots of sitcoms. I’m old enough that I remember when Nick at Nite was a new thing.

I really became psychologically attached to a lot of these pretend TV characters. It was the one aspect of my youth and what turned me into the person I am today [that] we’ve never been able to really utilize. My love of all sorts of movies and genre movies has absolutely been poured into all 23 movies you’ve seen us make at Marvel Studios already, but that aspect of my past, I hadn’t even considered necessarily being able to do anything with.

The two things that changed that was seeing the [2016] comic miniseries “The Vision” [by writer Tom King and artists Gabriel Hernandez Walta and Mike Del Mundo] end up on my desk. Those covers in particular of Vision standing in the doorway of a suburban home with a white picket fence and a mailbox that says “The Visions” on it — that almost “Leave it to Beaver” type imagery — and what it was like when he was in that environment is what led me to say, “Let’s look at putting these two things together.” And [second], doing what is now our first Disney Plus series in a way that it couldn’t just be a movie. It’s not just a long movie on on Disney Plus. We will make shows that are like that, but for our first one, it felt great to do something that could only be done for television.

You have 10 titles set for this year and at least seven titles announced for 2022, which is a considerable expansion of the Marvel Studios slate from years past. What are you doing to maintain the quality control Marvel has been so well known for?

The time spent making these things was about the same. We just had a year delay, as the whole world did, before we were able to put them out. Certainly, a number of the movies coming out this year were supposed to come out last year. But even taking that into account, yes, there’s certainly a lot more than we’ve done before. And it’s really everything we’ve been building towards for the past three years. As we were finishing the Infinity Saga with with “Endgame,” “Infinity War,” and “Far From Home,” we were also planning what was next. And this expansion into Disney Plus was a part of that from the start. It was the notion of growing and expanding the MCU into this different platform, that would allow us to further explore characters — like Wanda and Vision, like Loki, like Falcon and the Winter Soldier — that we’ve met before, but hadn’t been able to focus on or spend as much time with as we want to. And also continue bringing in new characters to the MCU, thanks to the embarrassment of riches from the comics. We have an amazing team of people at the studios with creative producers dedicated to each project, 24 hours a day on location. The management system that we started when it was just a couple of movies and a handful of us, is the same now when it’s a lot of movies, and much, much more of us.

The metabolism of TV is usually that a new season of a show comes roughly once a year or so. Is that something you’re aiming for with Marvel’s shows for Disney Plus?

It will vary. There are some shows that have been built to further expand our storytelling and then go into features. We’ve already announced Lizzie Olsen being a part of “Doctor Strange 2.” We’ve announced Teyonah Parris being part of “Captain Marvel 2.” There are some shows that, while always interconnected, are being built with multiple seasons in mind. So it’ll vary the way a lot of I think great TV now varies, whether it’s a couple of years between seasons of “Game of Thrones” or “Stranger Things,” or one offs like — what did I just watch? — “Queen’s Gambit.” One of the fun things about streaming is the rules are loose, which allows for you to just follow creatively, where you want to go.

The pandemic, which you alluded to earlier, is an experience that pretty much everyone on the planet has shared together, which is something that has never really happened before in our lifetimes in this way. How will the MCU contend with that creatively, moving forward?

I will tell you, because it’s a very good question, that about a year and a half ago, as we were developing all these things — maybe two years ago, I don’t remember — I started to say the Blip, the Thanos event that radically changed everything between “Infinity War” and “Endgame,” that gave this global universal galactic experience to people, would only serve us so well, that we need to just keep looking ahead and keep going into new places. I was wary of it becoming like the Battle of New York, which was the third act of “Avengers,” which ended up being referenced as an event kind of constantly, and some times better than others. I was wary of that. As we started getting into a global pandemic last March and April and May, we started to go, holy mackerel, the Blip, this universal experience — exactly as you described it — this experience that affected every human on Earth, now has a direct parallel between what people who live in the MCU had encountered, and what all of us in the real world have encountered. And it has been quite interesting, as you will see, in a number of our upcoming projects, the parallels where it will very much seem like people are talking about the COVID pandemic. Within the context of the MCU, they’re talking about the Blip.

But it really revitalized that notion in a way that made it substantive. My nervousness was it just being an event that we reference constantly between things. I wanted it to have more meaning behind it. And if that meant leaving it behind and coming up with new things, that was it. Of course, we always come up with new things as well from the comics, but the real-world connotations are shockingly and somewhat depressingly relevant now between our worlds.

We’ve reported as have others that “Loki” showrunner Michael Waldron is going to be writing a “Star Wars” movie that you are producing. What is the rough time horizon for that for you? Are we thinking early, mid, or late 2020s?

We’re thinking that we’re not — that is, um — everything you’ve heard about that has been been leaked. It’s not stuff that we’ve officially announced or gotten into. So, suffice to say, the focus is on all the number of Marvel things we’re working on. The what, where, when and how of that [“Star Wars” movie], I don’t know. I’m excited for “The Book of Boba Fett,” and the “Rogue One” show, and the Obi-Wan show, and Patty’s movie, and Taika’s movie. [Smiles] After “Thor: Love and Thunder,” of course.