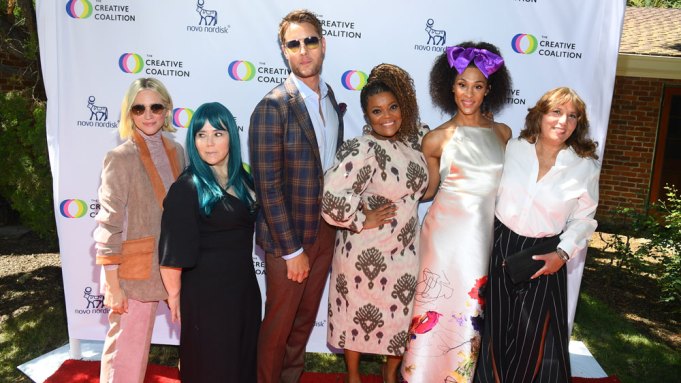 Bender told Variety that after such a long stretch of personal protocols (“I did go on vacation, I only go to outdoor restaurants. I haven’t been inside a movie theater, which is terrible but I just haven’t”) he felt comfortable hosting the organization’s afternoon soiree.

“They told me straight out that not only would they have to be double-vaxxed but they were going to be tested here, things were going to be outside, so I felt pretty safe considering all,” said the “Pulp Fiction” producer, who’s been a supporter of the group since hosting an event for his old acting friend Christopher Reeve’s paralysis foundation in 2000. “It’s a little odd but I’m really happy that people are here.”

“This Is Us” actor Justin Hartley, who attended with his wife Sofia Pernas, was on hand to be honored for his work with Operation Therapy, which brings veterans with severe PTSD together with therapy animals. He said he’d gotten used to the lack of once de riguer Hollywood hugs. “You know not to be offended when someone goes, ‘Hi,’ and they keep their hands to themselves,” he laughed. “But I learned a fist bump thing. It used to annoy me. I was like, ‘Why are we doing a fist bump?’ But now I’m like, ‘Oh, I get it. Fist bump’s kind of nice. It’s actually better than the handshake.’”

Following ample mixing and mingling in which guests who hadn’t seen each other over the better part of 18 months gleefully reconnected (including actual hugs), the organization — which promotes issues of public importance among the entertainment community and creates public service campaigns — bestowed awards to an array of television performers for their activism and kicked off with a timely nod to Dr. Anthony Fauci, who appeared virtually.

Fauci acknowledged the significance of entertainment industry’s assistance when he was tasked with combating the HIV/AIDS epidemic in the 1980s, “Now we’re in the middle of another deadly pandemic, and once again, the creative community has stepped up to communicate critical public health messages about the importance of the proven interventions against COVID-19,” he said. Noting that his work battling COVID, which he’d thought coming to a close, resumed anew with the delta variant and vaccine refusal, he wryly quoted Michael Corleone: “Just when I thought I was out, they pull me back in.” But he still believed the industry’s continued efforts would be vital in changing the game: “We may be able to approach a goal that I believe will allow us a return to normal. Your voices will continue to be critical.”

Variety senior editor Marc Malkin emceed a fast-paced, alternately amusing and emotional trophy ceremony, led off by an aqua-wigged Alex Borstein, who bawdily joked about the shape of the award and using it on OnlyFans to raise money for her cause. Borstein was honored for her work with the National Hemophilia Foundation, a medical condition that has affected her, her mother, her daughter and other members of her family. “I’m not here as a spokesperson,” the “Marvelous Mrs. Maisel” actor said. “I am here as a family member of the bleeding disorder community and it is a passion. It’s not something I choose to get the word out about — I must.”

“Pose” star Michaela Jaé Rodriguez was recognized for her work of promoting trans visibility. “I’ve always wanted to generationally sow seeds and make sure that I’m making them grow, and the generations that are behind me, I’m wanting to make sure that they flourish in the ways that I know that they could,” said Rodriguez. “I’m gonna keep doing my job by making sure I stay as vocal as possible for the trans community, especially women of color out there.”

Receiving the “Your Voice Carries Weight” award for her activism for obesity education and acceptance, an emotional Yvette Nicole Brown, who revealed that she’d lost her mother two months earlier, explained “I have been every single size on the planet. I’ve done most of it in front of cameras — if you saw me on ‘Community,” I gained about 30 pounds in five seasons. I have never felt more invisible… It matters for someone to say ‘I see you.’ Forty-two percent of this country doesn’t feel seen. We are entertainment people in this room, we have power, our voices matter. We can change this.”

Accepting for her work with the therapeutic letter writing initiative September Letters, Brittany Snow described how at 15, she was unhealthily connecting her physical appearance to her happiness, until a celebrity essay in a magazine revealing her recovery from similar issues helped Snow move forward. “I carried it around in my back pocket — it reminded me that I wasn’t alone. When my head told me I was crazy the article in the back in my back pocket told me that I was one of many.” Years later, after achieving her own fame and publishing a similar essay, Snow encountered a fan at a coffee shop: “She turned around tears in her eyes, and pulled out my article from the magazine out of her back pocket.”

Also honored was Padma Lakshmi, who appeared virtually to accept for her work with the Endometriosis Foundation of America. “I wanted to start the foundation so that we could raise awareness so that we could increase funding on a federal level, so that we could lobby insurance companies to pay for women getting checked out properly,” said Lakshmi. “I don’t want any young woman in the next generation to go through what I and millions of women have gone through.”