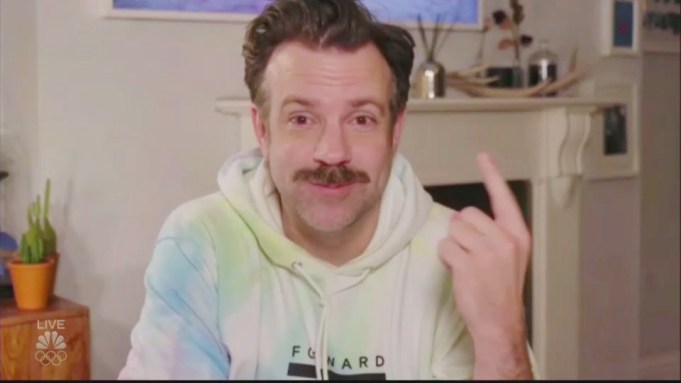 Jason Sudeikis explained the origin of his tie-dyed hoodie and offered his reaction to fellow nominee Don Cheadle’s gesture during the “Ted Lasso” star’s acceptance speech after Sudeikis won for lead actor in a TV musical or comedy series.

Sudeikis’ pastel-colored hoodie got attention from Globes watchers on Sunday as a fashion choice reflecting COVID times. Speaking to reporters backstage, Sudeikis explained that the hoodie with the logo “Forward Space” came from his sister’s dance studio and workout space in New York City.

The star of Apple’s comedy series about an American coach who turns around a U.K. soccer team kept in deadpan mode throughout his backstage remarks. When pressed about the casual nature of his Globes attire, Sudeikis insisted he was not a downscale trailblazer.

“You gotta look back at Audrey Hepburn for ‘Funny Face.’ She also wore a hoodie,” he quipped.

Sudeikis was also pressed about the gesture made by Cheadle, star of Showtime’s “Black Monday,” while Sudeikis was giving his acceptance remarks on the live telecast. Sudeikis made it clear he had no problem with Cheadle’s move.

“That’s just Kansas City love,” he said of the actor’s hometown. “He knew I’d listen to him. A lot of people don’t know he’s an excellent stage manager as well as an American acting icon.”

Sudeikis wouldn’t give up any hints about plans for season two of the quirky comedy that he co-created with Bill Lawrence, Joe Kelly and Brendan Hunt. The only constant he would acknowledge? “The mustache.”