Continue to Variety SKIP AD
You will be redirected back to your article in seconds
May 25, 2021 6:32am PT 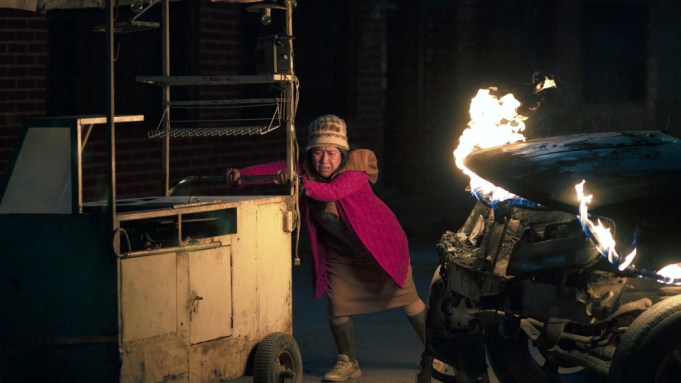 Presenting a fictional mosaic of characters in the events leading up to the massacre that took place in the border town of Allende, Coahuila, in 2011, the series gives the point of view of the victims whose lives were forever altered in a tragedy that was sparked by a DEA operation gone awry.

The trailer shows a montage of characters and scenes in the lead up to the unspeakable event where the Los Zetas drug cartel torched and killed hundreds of innocent people related (or not) to an alleged snitch.

Schamus made it a point to hire women for all aspects of the series, starting with screenplay and research assistant Maynné Cortés, his co-writers/executive producers Monika Revilla (“Dance of the Forty-One,” “The House of Flowers”) and novelist Fernanda Melchor (“Hurricane Season”), co-director Marianna Chenillo and executive producer Sandra Solares, among many others.

“Ginger Thompson’s report was made possible because of the bravery of the women who stood up and made sure these stories were told,” Schamus told Variety. “It was really important to keep the DNA of these voices and to make sure they were amplified by women creators in every step of the process,” he continued.

In a blog he published May 25 on Netflix’s site, Schamus explained his choice of title: “In telling the story, we have two core objectives: to make visible the people our culture often works to erase from our perceptions and memories, and to affirm our co-existence with them. In English, the phrase ‘Somos’ requires two words: “We are” or “We exist.” But in Spanish, one word says it all. I asked if we could add a period after the title so that it reads as an assertion, and not just a title.”

He admits that it took a while to secure the rights to Thompson’s report from ProPublica, which was hesitant at first. “Rightly so, we struggled to find an appropriate approach that would make good television but not violate the trust of the people,” Schamus recalled.

The pandemic also took its toll on the production, forcing them to suspend the shoot for about five months. When then President Trump decided to close the borders between Mexico and the U.S. to stem the spread of COVID-19, Schamus flew back to the U.S. as a precaution. This meant monitoring the shoot from a bank of monitors in New York. “It was tough, I now have more empathy for drone operators, who are stuck in bunkers in the middle of the Nevada desert,” he said.

“The series shifts our attention to the people who are standing in the corner of the frame,” he pointed out. To that end, Schamus opted for a mix of non-professionals with professional actors, which was a challenge in itself as both groups learned to work with each other. The production held a three-week intensive workshop to prepare them for their roles. To prepare for the project which shot primarily in Durango, Mexico, Schamus took intensive courses in Spanish, which he speaks quite fluently now.

According to director Alvaro Curiel, who directed four out of six episodes, the experience of working with non-pros was a revelation. “Before this, I swore off working with non-pros, now I relish working with them,” he said. He incorporated several non-pros in his mother-son road movie which he made with Barbara Mori during the series’ break. He filmed “Tu Eres Mi Problema” (“You’re My Problem”) in Baja California and was working on both projects towards the end of the series shoot. “It’s my love letter to problem kids, as I was one myself,” he said.

Schamus is now so enamored with TV that he has committed to showrun and write a large-scale series in Europe.