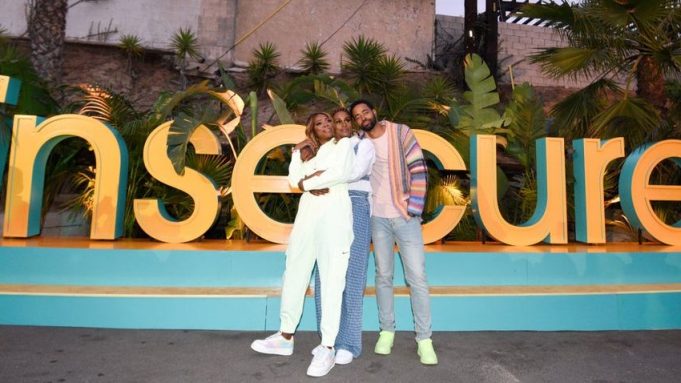 Just 24 hours ahead of the fifth and final season premiere of “Insecure,” creator and star Issa Rae welcomed hundreds of fans gathered at the parking-lot-turned-venue of Hilltop’s Coffee and Kitchen in L.A. for Insecure Fest — a five-hour live musical celebration of the show.

“I gotta shout out Hilltop for hosting this in the parking lot, make sure to go there and get you some lavender lattes because that’s my favorite,” Rae quipped, before giving a final thanks to HBO for giving her and the show this platform.

First held as a block party in Brooklyn celebrating “Insecure’s” first season, the festival has grown to mimic Rae’s character Issa Dee’s block party featured in Season 4 of the HBO comedy. As another real-life connection, hosting the event at Hilltop also represented Rae’s growing business empire, as she’s a partner with the coffee shop.

Fans posed in front of recreations of iconic set pieces from the show, including Issa’s Dunes Apartment Building, the We Got Y’all building and a mirror where they could mimic Issa’s signature pep talks.

WarnerMedia’s senior VP of multicultural marketing Jackie Gagne spoke to Variety about the evolution of Insecure Fest over the years.

“The event has definitely gotten bigger since we started,” Gagne explained. “And seeing all of the support and love from the community off the bat from season one made us realize we were doing something right by this event.”

The party also marked the first live-event for HBO’s Scene in Black initiative, launched in September.

“This idea of bringing together the Black community and tapping into Black-owned businesses and having this opportunity to celebrate together — especially a show like ‘Insecure,’ was really important to us and special,” she added.

Reflecting on both the legacy of this event and the show that it celebrates, Ellis emphasized the importance of Black storytelling.

“Shows like ‘Insecure’ and ‘Atlanta’ are really pushing the envelope and making people question why don’t we have more shows like this on TV for Black women, Black men and the Black community,” he said.

Crissle West and Fran Medina, hosts of the “Insecuritea” podcast, emceed the live festival and welcomed Rae and Orji to the stage to introduce a sneak peek screening of the Season 5 premiere episode.

“I am such a massive fan of theirs and the fact that they would come all the way out from New York to L.A. to host this means so much,” Rae said. “I hope that they went easy on us this season, and if they didn’t go easy on us, don’t listen to that shit.”

“This is just a culmination of what Issa’s vision is in general,” she continued. “To have a place where Black people can come together and make Inglewood and South L.A. look sexy, and she has done that all five seasons.”

Roars of laughter surged throughout the crowd during the screening, with cast members standing up to revel in their favorite moments along with the fans. After the screening, fans were encouraged to continue enjoying food and drinks and partying alongside the cast members as they turned the venue into a dance club.

Insecure Fest also wrapped up weeks of celebration for Rae and the crew, who hosted watch party screenings of season 1-4 in theaters with fans last week and danced the night away at the Season 5 Premiere party at Kenneth Hahn Park on Thursday night.

Ahead of the show’s Sunday night launch on HBO, Orji had one request for the fans as they watch the season: “I would love to see Twitter in Season 5 just love Molly a little bit more!”