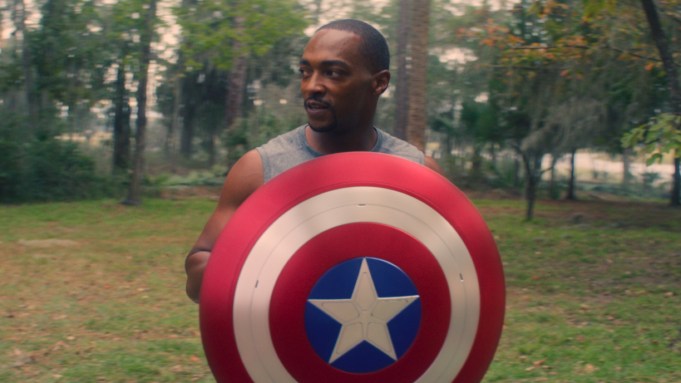 While Bucky Barnes-Sarah Wilson ‘shippers are clamoring for Marvel Studios to #ReleaseTheBuckySarahCut, it’ll have to settle for a detailed behind-the-scenes look at the creation of “The Falcon and the Winter Soldier” that includes more delightful Helmut Zemo cuts and a look at the way the writers approached Sam Wilson’s (Anthony Mackie) transformation into Captain America.

The hour-long program, part of the “Marvel Studios Assembled” series that last gave us a look at how “WandaVision” was made, was just released on Disney Plus on Friday. Here are a couple of key takeaways.

According to executive producer Nate Moore, the line in “Endgame” that most resonated with “The Falcon and the Winter Soldier” head writer Malcolm Spellman occurred during the scene in which Steve Rogers passes on the Captain America shield to Sam Wilson. “How does it feel?” asks Steve, to which Sam replies, “Like it’s someone else’s.” Co-exec producer Zoie Nagelhout called it the “backbone of Sam’s arc.”

“I felt like we would be dishonest to the fans and dishonest to, just on a human level, if we had this Black man just accept this symbol without having real ambivalence about it,” said Spellman. “And we knew that that was going to be crucial to Sam’s burden.”

Separately, the antagonist of the series — the misguided Karli Morgenthau (Erin Kellyman) — was mean to “tap into the spirit of how people feel today,” said Spellman. “Even though the pandemic hadn’t hit yet, that all just exacerbated a feeling folks were having. And if you’re Black, you’ve been having it your whole life, which is: The game is rigged, the people who are at the top are becoming irresponsible. We accept the game is rigged, but now they’re getting irresponsible in how much they’re taking from us, and people just have to push back. And we wrote Karli as a hero. She is a hero that goes bad.”

The Steve-Bucky relationship “so dramatic and so filled with pathos,” said Moore. But Sam and Bucky, who famously did not get along in the MCU films, were meant to be the buddy-cop pairing that so many fans wanted.

On a spectrum that goes from dramatic to comedic — “Defiant Ones” to “48 Hrs.” to “Lethal Weapon” to “Rush Hour” to “Ride Along” — Spellman said “we knew we wanted to be somewhere near ‘Lethal Weapon.'”

In the making-of program for “WandaVision,” we heard Teyonah Parris say that she didn’t know she was going to portray Monica Rambeau until she booked the job, a Marvel casting tactic that was echoed in this episode of “Assembled” as well.

“Any time I get to play Ayo, it’s always like a Christmas present,” said Florence Kasumba, aka one of the Dora Milaje. “Most of the time, when I get the phone call, I don’t even know the story. I only know that I will play the character, but I don’t really know what’s happening. And like the audience, I’m excited, because I have no idea. I will have to read the books and train, of course. I just got used to the fact that when I get the phone call, I will always be ready to function.”

Similarly, Cle Bennett (who plays Lemar Hoskins aka Battlestar) wasn’t clear on which character he would play when he auditioned for the role.

“I had no idea that I was actually going to be an integral character at all,” he said. “And they were like, ‘Actually, you’re Lemar Hoskins.’ And I was like, ‘Shoot! I know Lemar Hoskins.’ Because I literally have the comic books. I have them. I have the editions that he’s in.”

As for the mysterious Contessa Valentina Allegra de Fontaine, Julia Louis-Dreyfus says “whether she’s a good guy or a bad guy remains to be seen.” Nagelhout notably calls the character “a sort of Nick Fury, but shady,” which seems to allude to the formation of an anti-Avengers team.

“I like the idea of a female mastermind. I think it’s about time,” said Louis-Dreyfus. “She’s about three steps ahead of everyone, and that’s gobs of fun to play.”

Besides the pandemic, an earthquake interrupted filming

While much of the show was filmed in Atlanta, Moore said the production team had initially planned to film partly in Puerto Rico, when a “sizeable,” infrastructure-damaging earthquake paused their plans. The crew had still planned to film there after the first earthquake, until a second one struck on the eve of their arrival.

Prague was then intended to replace the Puerto Rico-based scenes — until the pandemic forced the production to shut down, and producers had to figure out how to quickly jet 100 people back to the U.S.

“Shutting down for COVID was a big part of the struggle of the show,” said Moore, who added that it “weirdly gave us more time editorially to really think about what the show could be. But it was also something we’d never had to fight through before.”

Baron Helmut Zemo’s “incredible coat,” as Daniel Bruhl called his signature knee-length, fur-collar garment, was inspired by WWII Russian and Polish military overcoats. And Bruhl, enthused at the idea of finally donning the Zemo mask, even stopped by a comic book shop during filming to buy a few comics featuring the villain, in order to get a feel for the character.

Possibly the most delightful gag in the docu is a faux-commercial featuring Bruhl hamming it up as Zemo, Sokovian suit salesman. “Hello guys. Do you like my style? You can have it as well: Suitkovia.”

“Marvel Studios Assembled: The Making of ‘The Falcon and the Winter Soldier'” is now streaming on Disney Plus.