Why ‘The Falcon and the Winter Soldier’ Is So Pointed About Race, Nationalism and the World Today 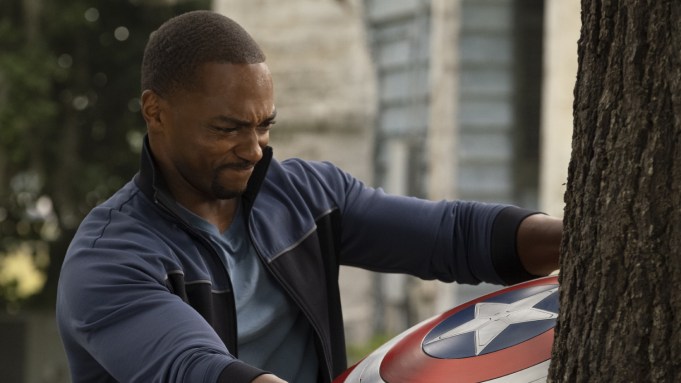 SPOILER WARNING: This story discusses major storylines in the first episode of Disney Plus’ “The Falcon and the Winter Soldier.”

After “WandaVision” debuted in January, many commented that Marvel Studios’ first TV series for Disney Plus felt eerily prescient for the pandemic age, with its heroine avoiding dealing with her grief by creating a world in the image of classic American sitcoms.

On paper, Marvel’s next Disney Plus series, “The Falcon and the Winter Soldier,” would seem to take the Marvel Cinematic Universe back to more familiar territory. There are no fantasy alternate realities or otherworldly superpowers. Instead, it focuses on Sam “Falcon” Wilson (Anthony Mackie) and Bucky “Winter Soldier” Barnes (Sebastian Stan), as they confront the world after returning from the Blip — i.e., when half the world’s population was snapped back into reality at the end of “Avengers: Endgame.”

As viewers of the first episode can see, however, “FAWS” is in many ways just as connected to the world we live in now as “WandaVision.” For one, Sam has to deal with being a Black man who is handed the mantle of Captain America by (a very old) Steve Rogers, at a time when issues of race and representation are at the forefront of a fraught national conversation. And the premiere also makes clear that as the series continues, both Sam and Bucky will have to confront how the Blip put the entire world in turmoil, while a resistant group called the Flag-Smashers tries to bring back a world without nationalist borders. Sound familiar?

As “FAWS” head writer Malcolm Spellman explains to Variety, all of this was very much by design — and became even more so after the COVID-19 pandemic shut down the production. Here’s what he had to say.

The title of the show is “The Falcon and the Winter Soldier,” but Sam and Bucky spend the entire first episode apart. There’s an urge in storytelling to cut to the action as quickly as possible, so why did you want to start with us not having those two characters together?

Kevin [Feige] really wanted to position them with their own storylines, so that we understood, this is going to be these characters’ chance to emerge as fully realized human beings. If you bring them together too quickly, all of a sudden they exist as a duo and not as individuals. I would like to say I would have also come to that conclusion had Kevin not come to it. But that’s why we did that. We wanted the audience to understand, yes, this is going to be a buddy two-hander, but first, let us introduce you to these people as individuals.

The episode ends with the reveal that the government lied to Sam, and used Steve Rogers’ shield to create a new, white Captain America — after Sam had publicly set that mantle aside. That felt pointed to me…

Oh, it is. [Laughs] I think this is going to be an extremely relevant show in a lot of ways, and that is not by accident. The magic of embracing diversity in the writers room and having an almost all-Black staff allows you to tap into pop culture. I mean, Black folk are the masters of it, and when we get a shot, to do what we do, it is universal for everyone because our struggle and our point of view is a concentrated version of the greater human struggle. So it is yeah, those moments you’re talking about are pointed, and we dig deeper and deeper and deeper as the series progresses.

You had a banker ask Sam how he made his money — that’s a question that I’ve always wondered about and I imagine you had, too. Did you ask that of Kevin Feige?

Adam, it’s funny. Every single person I’m sitting with went crazy over that scene. It satisfied something very deep for people. What’s a trip is when we got to that moment, and that question came about naturally, the entire Marvel structure chimed in. That was a really, really fun moment, where what was supposed to be a scene that mostly dealt with the issues of, you know, a Black family from a certain background dealing with a bank loan, and the fact that him being a celebrity does not transcend him being Black, turned into way more fun of, Wait, how do superheroes make their money? I can’t tell you the volumes of documents that came out in building what is this much dialogue [holds fingers inches apart] in the episode.

In the in the context of Bucky, it seems like your show is going to be a lot about regret and making amends. What about these characters did you want to be able to pick apart and explore?

That was the primary reason I showed up, which was for Sam, the idea of a Black man confronting the stars and stripes is whether it’s even appropriate to carry that shield. The audience will find out very quickly that he has strong opinions that are going to surprise them. For Bucky, it was so obvious to me how crazy this dude’s life has been. He’s only got short moments in a million different movies, right? And Sebastian, being such a good actor, was able to wield all the trauma of his backstory, and bring him to life. It was like this character walks through your door, and he’s like, hold on, let me bring my baggage with me. And it’s 37 bags stacked high that we had the pleasure of unpacking the series. So what we tried to do was imagine every person Bucky killed while he’s under the control of Hydra. Take the fact that he’s 106 years old, and find one storyline that personalizes all that and forced him to confront it, and allowed Sebastian to show his chops.

Part of the fun of Marvel is that you get to play in the larger sandbox. It’s really great to see Don Cheadle show up so early as Rhodey, and it really struck me how rare it had been to see two Black men in the superhero context just having a conversation.

That was super exciting for me, man, and the rest of the writers and for [executive producer] Nate Moore — just the concept of two Black superheroes being on screen together said a million things. If you’d seen how much dialogue we wrote, because I was so excited to get them together. They were just riffing. Like, it was a moment for them. I was psyched about it. A lot of that got distilled. But I think this bigger issue that’s going on, they don’t have to say that much. Everybody knows these are two Black men, and they’re dealing with the stars and stripes. They don’t even have to say that much for you to get how much it’s weighing on them, and how much these dudes probably cooked up and talked behind the scenes in the MCU.

One of the villains established this in this episode are the Flag-Smashers. In the comics, Flag-Smasher’s end goal of doing away with nationalism is something one might want to strive for, especially considering we’re living through a very nationalist time in the world. How did you decide you wanted Flag-Smasher to be a part of the show?

We really wanted this to be a series that presents superhero mythology of the times. We wanted it to be relevant. We wanted it to be forward facing. Look at what happened in MCU. Thanos disappeared half the planet’s population — gone for five years, then they reappeared. That is a global problem, right? That’s a problem everyone on the planet had to deal with. That’s also happening in our real world today. So all the villains were born from that spirit, and villains who actually believe they’re heroes, because they’re responding to the state of the world, as opposed to some personal agenda, or a quest for power, or I want a million dollars, you know?

The fact that you shot so much of the show before the pandemic makes this feel even more oddly prescient.

I want to be honest. The prescience the room had, in general, was staggering. How relevant we were going to be no matter what, it made me feel very, very good. But we had a cheat code. Because the mandate was to be of the moment, when COVID hit and shut us down, we were already playing with these themes, but it allowed us to really drill down. We were already responding to the snap, you know, to the blip, but it really allowed us to pause, and rework and retrofit to make sure the connectivity between what we’re dealing with in the real world today really, really resonated with what was going on MCU. So I do want to say we did cheat a little bit.