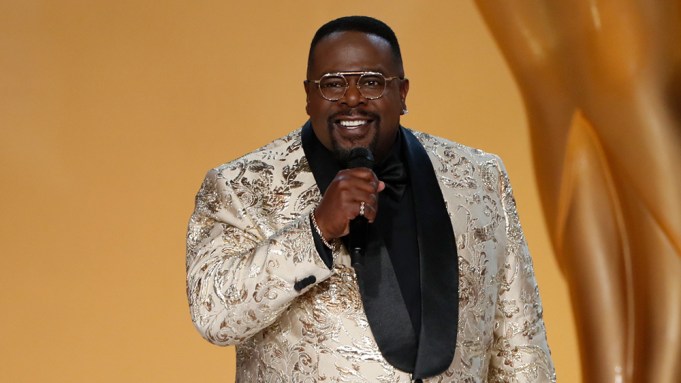 Cedric the Entertainer kicked off the 73rd Emmy Awards on CBS Sunday night with a musical number that parodied the Biz Markie hit “Just a Friend.”

Cedric started off the song, which changed the lyrics of the beloved rap song to more TV-themed content. He was quickly joined by a number of other stars, including rapper and “NCIS: LA” star LL Cool J, rapper and “Dave” co-creator and star Dave “Lil Dicky” Burd, and Rita Wilson.

Multiple audience members got in on the fun as well, including Anthony Anderson and Tracee Ellis-Ross, Billy Porter, and Mj Rodriguez.

The tribute to Markie came after the rapper died in July at age 57. It was reported at the time that Markie had been suffering complications from diabetes at the time of his death.

Cedric then rejoined the crowd a little while later in the broadcast to do his monologue, joking about the COVID vaccination requirements for attendees.

“We had to get vaxed to come here,” he said. “I did not have a reaction like Nicki Minaj’s cousin…I got Pfizer, that’s the Neiman Marcus of vaccines. Moderna is Macy’s. And Johnson & Johnson is TJ Maxx.”

Cedric later joked that there is a lot of pressure on him as a Black man hosting such a major awards show. He said that Black people “think I can give an award to anyone.”

“‘You gotta give an award to Martin Lawrence, man,'” he said. “‘And you gotta give one to Shanaynay.'” Cedric was quick to clarify that Lawrence and Shanaynay were in fact the same person.