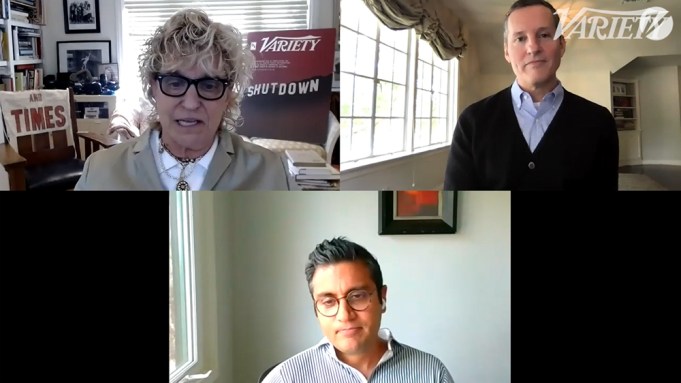 Disney Plus launched in November 2019, at a time when coronavirus wasn’t on the World Health Organization’s radar yet and quarantine lockdowns seemed a thing of dystopian films. Soon, the streamer had to amass subscribers, maintain audience engagement and shift movie debuts, all while keeping the budding platform afloat.

Against all odds, Disney Plus has racked up more than 100 million subscribers and has become a bonafide hit among kids and adults.

“Our marketing campaigns have contributed to the platform’s success 100%,” Joe Earley, executive VP of content curation and marketing at Disney Plus, said in a humorous tone. “There is no denying the power of these brands.”

But it doesn’t just take a well-known brand to be successful in Hollywood — especially during COVID-19. Earley and Asad Ayaz, president of marketing at The Walt Disney Studios, spoke on Thursday at Variety’s Entertainment Marketing Summit presented by Deloitte about the trends that sprouted as a result of the pandemic and shook the entertainment industry (and the Mouse House). As filmgoers were driven to at-home viewing and the show had to go on, even when COVID-19 caused production delays and curbed in-person contact for marketing strategy, Disney had to engage its consumers digitally. Claudia Eller, Variety editor-in-chief, asked the two executives how they pivoted and transformed Disney’s marketing approach during this past year.

Ayaz, who covers the marketing, advertising, media planning and publicity for anything and content from the studio brands —including Disney Plus, Hulu, as well as live-action films and series, animated films and series from Marvel, Pixar, Lucasfilm and 20th Century — thinks that part of this success can be attributed to the fact that his and Earley’s teams collaborated closely from the get-go for Disney Plus and Star, the streamer’s more mature general audience content hub.

“Ayaz’s teams were already the experts on the Marvel fans, the ‘Star Wars’ fans, the Pixar fans, the Disney live-action fans, and so on and so forth,” Earley explained. “Those are the brands that are driving Disney Plus, and certainly drove the launch of Disney Plus, and so our teams acted as one team from the beginning.” Per Earley, the collaborators would ask themselves constantly what the needs of Disney Plus were, where the streaming platform was going, and how it could optimize resources so that everything was as successful as possible.

With the onslaught of all of these direct-to-consumer platforms amid or right before the pandemic, which includes not only Disney Plus, but also HBO Max, Peacock and Discovery Plus, the distinction between film and TV has blurred. In order to keep a more fixed line between the two, Ayaz noted that launch weekend is crucial for both theatrical and streaming film releases, as well as streaming series. “It’s about sustaining that, and promoting each episode and continuing to bring in new episodes and new audiences as your season progresses,” he said.

Earley added that he and Ayaz’s teams have collectively had to “transform into streaming marketers” as Walt Disney Studios and Disney Plus have grown at an unbelievable pace, combining their know-how about bringing something new to the market — whether it’s a TV show, a movie or a product — and pouring all of that energy into seeing what works and what doesn’t.

Ayaz said part of making sure that launching movies simultaneously in theaters and on Disney Plus doesn’t negatively impact marketing is to explicitly indicate choice and comfort levels in messaging. “If you’ve looked at our campaign materials, for some of the films, we have in-theater messaging where they order it on Disney Plus Premier Access side by side. Joe and I, and our teams, we work closely together on how that’s executed on all of our platforms, including traditional advertising platforms and digital platforms.” The process includes working with marketing talent to do special shoots and relaying the two options to watch these films. “So it’s really inherently threaded through every aspect of the campaign and giving people those two options, then working with all of our partners on the streaming side and on the theatrical side to customize that as necessary,” Ayaz continued.

Because the team was “staffed like a startup,” and included Ayaz’s team as an extension, Earley said they went into the launch of Disney Plus acknowledging that the number one obstacle was the perception that this was an app solely for kids. “So if you look at the Disney Plus launch, you will see a decided effort to market this as a product for adults, for families, for kids. It’s not so easy to necessarily just put up a range of content and have the marketing effectively cut through, but we are very proud and have far exceeded our own expectations and have done so in every market.”

Part of operating their marketing teams like a startup has been consulting with the executives behind some of Disney’s biggest brands. That includes Kevin Feige, president of Marvel Studios, and co-president Louis D’Esposito, who Ayaz acknowledges has been instrumental in the marketing plans for Marvel properties that came out during COVID-19, like “WandaVision” and “The Falcon and the Winter Soldier.”

“He and all of their producers at Marvel Studios are very close partners to our team,” Ayaz said. “We’ve worked together for a decade or more, since the first ‘Avengers’ and everything sense. So we absolutely lay out the plan. We come up with a strategy, creative options and get feedback.”

You can watch the full keynote, and listen to Ayaz and Earley go deeper into the nitty-gritty of formulating and re-calculating brand campaigns for properties and franchises such as Lin-Manuel Miranda’s “Hamilton,” “The Mandalorian,” “The Mighty Ducks,” Beyoncé’s “Black Is King” and “The Simpsons” above.