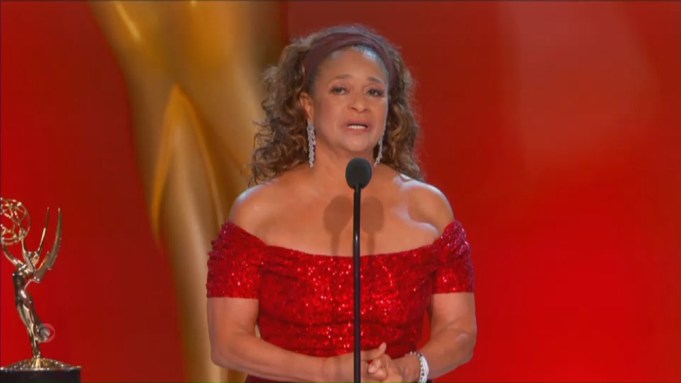 Debbie Allen — the iconic dancer, choreographer, actor, singer, director and producer — accepted the Governors Award at Sunday’s Emmy Awards, thanking the people who inspired her as a woman in the entertainment industry

“I am trembling with gratitude and grace. I’m trying not to cry and be equal to the situation because it’s been many years in the making. It’s taken a lot of courage to be the only woman in the room most of the time. A lot of courage and creativity and fight and faith to believe that I could keep going. And I have. And I brought a whole lot of people with me,” she said while accepting the honor.

She went on to thank her family, colleagues, dancers, choreographers and “the crews who work behind the scenes invisibly but without whose craft there is no measure of real success.”

Allen has found much success in her four-decade career, including five Emmys — two for “Fame,” one for “Motown 30: What’s Goin’ On!” and two more this year for “Christmas on the Square.” Still, the Governors Award marks a special achievement for her. She is the first Black woman to receive the honor, and she told Variety that she sees it as a sign to keep creating: “To see that the value of your work stands tall says that I have to keep doing it. Time is what I’m up against. I have so much to do. It’s not a moment to rest on laurels. [This award] means I have to keep my hands on the plow, as I always say.”

“Let this moment resonate with women across the world, across this country and across the world, from Texas to Afghanistan. Let them know,” she said during her acceptance speech. “And also with young people, who have no vote, who can’t even get a vaccine, they are inheriting the world that we leave them. It is time to claim your power, claim your voice, say your song, tell your stories. It will make us a better place. Your turn.”

Allen was announced as the recipient of the Governors Award in August, “in recognition of her numerous contributions to the television medium through multiple creative forms and her philanthropic endeavors around the world.” The award is intended to honor “an individual or organization in the television arts and sciences whose achievement is so exceptional and universal in nature that it goes beyond the scope of annual Emmy Awards recognition.” Previous recipients include Tyler Perry and the Perry Foundation, “Star Trek,” ITVS and “American Idol.”