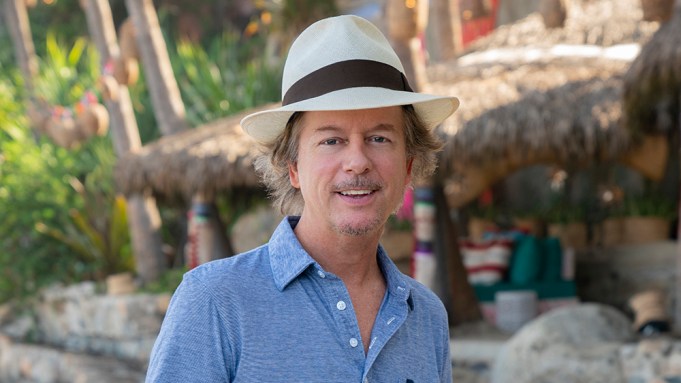 For those who have been watching “Bachelor in Paradise” this season, things look different down in Mexico.

For the first time ever, the summer series is not being led by Chris Harrison. Following the longtime host’s controversial departure earlier this year, the gig is being filled by a rotating slew of celebrities: former boy bander Lance Bass, rapper Lil Jon, actor Tituss Burgess, Bachelor Nation alum Wells Adams and comedian David Spade, who kicked off the season earlier this month and ended his quick turn as host on last night’s episode.

Spade, a longtime super-fan of “The Bachelor” who is known for his social media commentary and spoofs of the franchise, tells Variety he was approached by “Bachelor” creator Mike Fleiss about the role — and Spade says he’d be open to more.

“I would swish it around,” Spade quips when asked if he’d return to the franchise for another hosting opportunity. (The permanent role is open, after all.)

Here, Spade talks to Variety about his love for “The Bachelor,” his experience on “Paradise,” cancel culture and whether contestant Kenny Braasch really showed up to the beach completely nude…

Can you walk me through your journey with “The Bachelor?”

You’re so funny because you say “journey.” That’s like one of their favorite words.

Well, that’s why I used that word.

It’s so hilarious. I think the Courtney Robertson season [of “The Bachelor” in 2012] — she was with Ben, not Affleck, but someone [Ben Flajnik] — and I thought it was so funny. I just watched the show and I did a parody on “Funny or Die” about it, that old site. And then Mike Fleiss called me and he thought it was funny, and I came in and talked to him … So, we talked about that and we should do something one day about it. And then I just kept watching. I just kept making fun of it on my Instagram. It’s just fun to watch.

And then, years down the road, he finally asked you to step in as a guest host on “Bachelor In Paradise?”

One day he goes, “Do you want to get involved? Because we’re shaking things up.” They were really in the beginning stages. I was going to say no. And then I go, “Maybe.” So I went in and I said, “Yeah, let’s try ‘Paradise.'” That’s makes the most sense to me because it’s the least serious.

What was your immediate reaction when Mike Fleiss asked you to host a few episodes? Were you so excited?

How was your experience in Mexico?

I said, “Do you care if I’m, like, saying things like I do and just poking fun?” [Mike Fleiss] said, “No, that’s what we need. We need to change it. Just get something in there. Keep it fun again, get people talking again.” And so, I think it worked, as far as they let me do what I wanted. They kept the stuff I want. I would say, “Can you keep that?” And they said, “Yeah.” And then I leave.

You were just able to do your own thing, to improv and say what you want. There has been a conversation about comedians, in this age of cancel culture. Comedians being censored: what is your take on that?

It’s very dicey. It’s very tricky. You used to have to say anything to go as far as you could, to push the envelope, to get attention, and people would be like, “I like this guy. He’s pushing it.” And in comedy clubs, audiences really appreciate that … Now you say the one wrong move and you’re canceled. It’s a very tough world out there … I think all the comedians have gotten together, in a way, to say we just have to keep doing what we were doing, and the people that come to the shows will appreciate it. But you get an outsider that comes in and goes, “I was so offended.” The intent is not to be mean … If the intent is to do it as a joke or a spin on something, and it is mean to people, but you’re just making fun of that, I don’t think that’s horrible. I’ve been in the business doing it for 20 years, so I hope comics are allowed to be comics. I really hope so.

The Twitter reaction has been really strong. I see that you’ve been reposting some fan reaction on your social media.

I didn’t really think about it, but I started getting tweets about lines I’ve said. They go, “Oh, I like when he did this.” I was like, “Oh good.” At least it’s positive. That’s all I want, just be positive.

That’s one of the unique things about Bachelor Nation — you are always getting immediate feedback. Are you enjoying seeing what people are saying about you on social media?

I do. I saw Mike Fleiss that night. We had a dinner plan…it happened to be the night it aired … It was on in New York, I forgot. So right when I sat down he goes, “They’re already tweeting. You’re already trending within 10 minutes of the show and that’s good.” …People aren’t mad at me. People aren’t like, “What is he doing here?” It did feel good. I didn’t really think about it, but I was just really glad it went that way.

Would you be interested in doing anything more in the “Bachelor” world if you were asked?

I don’t know if I am in the age limit to be part of this Bachelor Nation, but I do relate to it because I’m so young at heart — I wear shirts that people who are 30 wear, so that’s good. I didn’t mind it. I’ll watch Monday… I’ll make some jokes about it. And then I’ll see. I’ll joke about me joking on the show. That’s tragic. And then I will see how it goes to the other people. I just want to see overall through the season, how it felt. What if I botch it?

You’re not botching it, David.

When they ship me off, I said, “Put a camera in the car. Let me go in one of the cars that the girls go in at the end when they get kicked off.”

Did you cry and sob in the car?

Of course. You can’t help it. You’re leaving paradise.

If the opportunity ever presented itself for you to have an offer for a more permanent hosting gig, would that be something that would interest you?

I would swish it around, yes.

Okay. Now, I have a few very hard-hitting question for you. I have to ask about the black box in front of Kenny. There was a lot of conversation. Was he really naked on set?

His wiener is square. It fit perfectly in that box.

Were you trying to keep a straight face?

They told me, “Don’t look down.” So I was trying not to. I leave that up to the girls. But I don’t know if I want to be a hammock with the guy… Usually that would come out later. It’s like, “Can I just say hi first?” I don’t want anyone naked right when I meet them. It usually takes a couple of days. But he’s ahead of the game. He’s like, “I’m naked, so if you want someone naked, I’m your guy.” No naked girls though on my watch!

But I need you to give me the definitive, truthful answer. You were on set, so you know. Was he really naked, or was he wearing something under the box?

I’m not allowed to say. I don’t even really know. I look at people in the eyes when I talk to them, Liz — like I’m looking at you.