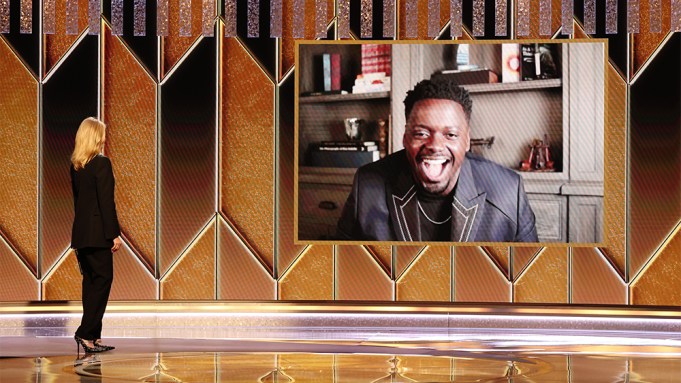 “You’re doing me dirty, you’re doing me dirty,” actor Daniel Kaluuya quipped at the start of his acceptance speech as the first awards presentation of the 78th Golden Globes got off to a rocky start, when the handoff to the winner’s video feed wound up transitioning to silence.

Laura Dern presented the award for best supporting actor in a motion picture to Kaluuya for his performance in Warner Bros.’ “Judas and the Black Messiah.” But Kaluuya’s audio feed didn’t connect, leaving viewers with only his muted video feed as he began gesticulating and making his acceptance remarks.

“As you can see, we unfortunately have a bad connection,” said Dern apologetically on stage as the feed cut away. “We apologize for that technical problem and send all of our congratulations to Daniel and his Golden Globe win.”

As the transition music swelled, Kaluuya came back into view, with a line everyone who has ever had a glitchy Zoom call has uttered: “Is this on?… Can you hear me now?”

And, like many a person who has done this on Zoom, it turns out Kaluuya’s feed was muted, but quickly rectified, a source tells Variety. In his exasperation, he wagged his finger at the screen and blurted out, “You’re doing me dirty.”

But when the audio problem was fixed, the actor launched into his acceptance speech, thanking his family and the HFPA. He cited his respect and admiration for the character he plays in the period drama, the Black Panther Party chairman Fred Hampton who was murdered at the hands of the FBI.

“I gave everything,” said Kaluuya of playing Hampton. “The great Nipsey Hussle says, ‘We are here to give until we are empty,’ and I gave everything. I couldn’t give it to a more noble man — that’s chairman Fred Hampton — and I hope generations after this can see how brilliantly he fought, how brilliantly he spoke and how brilliantly he loved. He taught me about myself, made me grow as a man and I appreciate it with all my heart. And I hope people — there’s a lot of information about how he died, but I hope you people out there will grow and learn about how incredibly he lived. Thank you so much for this honor.”

Later, when Kaluuya spoke to reporters in the virtual backstage area, technical issues also made for a few awkward moments. “It got into the wifi,” Kaluuya joked. He explained that he was frustrated when his audio didn’t work because he wanted to use his moment to draw attention to the legacy of Hampton.

“I wanted to give the recognition to where it’s supposed to be,” he said.