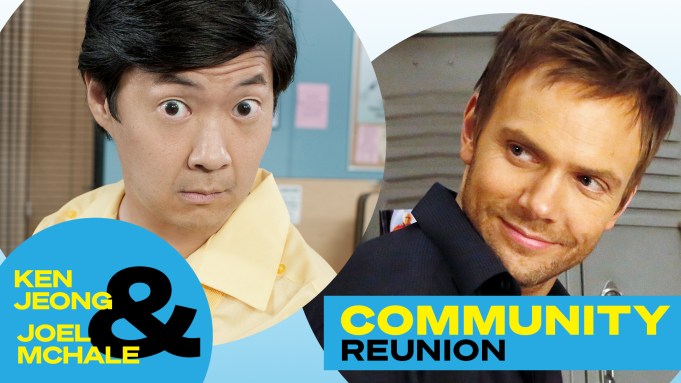 The first time Ken Jeong arrived on the set of “Community,” co-star Joel McHale jokingly asked him what he was doing there. Shouldn’t the breakout “The Hangover” actor be focusing on movies?

“Then I kind of thought like, we had been handed this secret weapon,” McHale recalled. “And then of course, six years and two cancellations later, Ken I were thick as thieves. Nobody worked harder. I was like, man, he’s got it dialed in, I better learn my lines!”

Jeong and McHale met up recently over Zoom to chat about their friendship and working relationship for Variety’s “Dream Teams,” a new series that pairs collaborators who have become known for their successful teamwork.

Jeong is currently seen all over TV as a panelist on Fox’s “The Masked Singer” and “The Masked Dancer,” as well as host of “I Can See Your Voice,” while McHale has frequently participated as a guest on those shows. Together, the two also hosted “Fox’s New Year’s Eve Toast & Roast 2021.” (Individually, McHale will next be seen in the dark comedy film “Happily,” which opens this weekend.)

But it was their partnership on “Community” that cemented their dream team: “When Joel and I are just talking in private, we’re pretty similar, I think we operate on the same frequencies in approach to our careers,” Jeong said. “And I think as time goes by, through the years on ‘Community,’ it was like, wow, we’ve got a lot more in common than then we initially thought, and we have a lot of the same value systems.”

Jeong credited McHale for his leadership on the “Community” set, and said he heard from another source that McHale even advocated more screen time for Jeong. “He looks out for other people all the time and it’s not an act,” Jeong said. “He’s a good dude. I’ve never forgotten that and when I’ve had my own projects, I would always in my head [try] to be like Joel and just really be the advocate.”

McHale returned the compliment, noting that “‘Community’ was fraught with all sorts of controversy and Ken was one of the rocks… Think about like Ken’s trajectory. He’s in all these huge movies and then he’s in ‘Community,’ and then he proceeds to like become the face of Fox Television. This how I know Ken’s successful, if I’m very, very jealous.”

Jeong has indeed become a bit of a good luck charm for Fox, starting with “The Masked Singer.” In one early memorable moment, Jeong didn’t recognized a masked singer who ended up being Margaret Cho, who had played his sister on his sitcom “Dr. Ken.” Said Jeong: “I’ll never hear the end of this because that’s something I should have known I shouldn’t have gotten sometimes as a panelist I’m always, I’m always nervous like this is someone I shouldn’t really know.

McHale said he marveled at Jeong’s ability to be the “secret weapon” on “Masked Singer” and enthused about his own experience as a frequent guest panelist. “I love being on,” he said. The first time out, he tickled Jeong throughout the taping — which he was sad to see didn’t make air. “The editors edited around all of that!”

In taking up hosting for “I Can See Your Voice,” Jeong said he went to McHale (who hosted “The Soup” for years) for advice. Jeong also credits his pal for helping him get through the COVID-19 pandemic.

“I think we really helped each other out, just kind of leaning on each other in a very creative way,” Jeong said. “Especially during quarantine. It was, how do we not stay stale creatively. If it wasn’t for Joel I would never have even thought about trying to do a podcast. It’s still one of my favorite things I’ve ever I’ve ever done, because I’m just so happy how organic that was. We just did it ourselves, we funded it ourselves and to be honest, we were doing it for ourselves.”

Said McHale: “I was such a workaholic kind of always wanting work to go-go-go, and my relationship with Ken made me kind of breathe and go, oh, we can just chat and talk about serious stuff while having in-depth conversations with people like Shaquille O’Neal or David Batista or Alison Brie. Those really were cathartic and wonderful. The pandemic’s been this horrible thing and terrible for the planet, but strangely there’s moments of joy like doing that… Growing closer to Ken was a gift, and I’ll never say this again out loud. But if Fox will have us, we’ll be doing the ‘Toast & Roast’ again, which I can’t wait for. He’s a brother.”