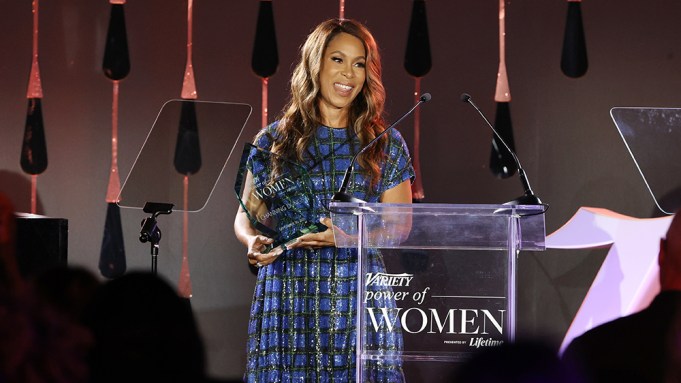 Warner Bros. Television Group Chairman Channing Dungey called on others to use their power for good during Variety‘s Power of Women event presented by Lifetime.

“I was lucky enough as a young woman in this business to be mentored by women who taught me that if we are in a position of power, it’s our obligation and our responsibility, to empower others,” she said. “I think tonight is about more than celebrating the power of women. It’s also about celebrating and recognizing the importance of empowering each other.”

Dungey, the first woman to run TV operations in the history of Warner Bros., was feted at the event alongside Rita Moreno, Katy Perry, Amanda Gorman and Lorde. Dungey referred to the other honorees as “an extraordinary group of women, with a truly diverse range of talents.” She was brought to the stage by critically-acclaimed film and television creator Ava DuVernay.

“I am fortunate that I have the opportunity to work closely with her, and to be artistically supported by her,” DuVernay said. “And I am thrilled to present her tonight as a Variety 2021 Power of Women honoree.”

Dungey began her remarks by delving into the history of the word “power,” stating that it “derives from the Latin word ‘imperium,’ meaning ‘to be able.’

“Think about that,” she said. “We are all able. By that definition, all of us are powerful. We all have power. So why then, lately, do I sometimes find myself feeling powerless? Today, we live in a country where we and our neighbors can no longer agree on a common set of truths. We live in a world where people are more likely to believe information that they learn from social media than information reported in the news. Here, and around the world, the very idea of democracy is being challenged. Women are being deprived of their rights. Racial and ethnic groups are facing discrimination and persecution at alarming rates. Climate change now truly threatens us all. And so yes, sometimes I do feel powerless. I imagine I’m not alone in that.”

Dungey went on to say that she owes her success to the women who came before her who paved the way for herself and others like her today. “Women who proved that power could mean more than strength or dominance or authority,” she said. “Who showed me that power can also mean inspiring others, and leading by example, and affecting positive change — and doing so with kindness, compassion and empathy.”

She continued by saying that she sees the importance of such empowerment at the Children’s Institute, a Los Angeles-based nonprofit on which Dungey is a member of the board of trustees.

“I love it when I get to visit the Institute’s preschools in Watts and have the chance to spend some time with the children,” she said. “They are all so bright and eager and curious. They have so much potential. They are ready to learn and nurturing that spark at an early age is so critical.”