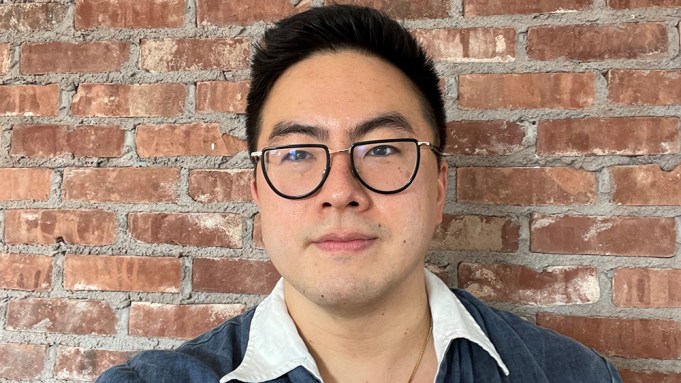 Bowen Yang’s greatest breakthrough moment on the last season of “Saturday Night Live” surprised even him. In an interview for Variety‘s Actors on Actors TV issue, the sketch comedian described the process of getting his role as the iceberg who sank the Titanic — a glacial mass who wants to be known for all his other accomplishments — to air. In conversation with “Hacks” star Jean Smart, Yang thanked her for praising the performance as “sincere” and “crystal clear.”

“No one’s described it as sincere yet, so that’s huge,” Yang says. “I wrote that with one of our head writers, Anna Drezen, who I’ve known since college. She texted me in February and said, ‘Maybe for the April 10th show, because the Titanic sinking anniversary is around that time, you come on Weekend Update as the iceberg that sank the Titanic and you’re just really annoyed that people still associate you with that.’ I told her it sounds like something we would have done back in the days — before we got professional comedy jobs and we would just, like, pound the pavement at bar basement shows in New York City with these outré concepts. In the back of my mind I thought, I don’t really see it.”

Yang describes the process of bringing the anarchic sketch to the table read: “We vomited out this draft in a few hours. We read it at the table; it did pretty well, and then usually they let you know, Thursday night, Friday morning, if your Update piece is gonna go to the show. By Friday afternoon, we hadn’t heard anything, so I texted Anna, ‘RIP iceberg.’ Friday night at midnight, I got a text from Colin Jost saying, “I think we’re gonna try this iceberg thing.”

Which made for a marathon preparation. “So then midnight to, like, 1:30 a.m., me and Anna are texting the departments,” Yang says. “And then, all day Saturday, she and I are just, sort of, writing and rewriting and rewriting and just trying to punch up jokes, and then multiple times we turn to each other and just burst out laughing because we were like, there was no way this was gonna make it onto TV. There was no way. It got picked for air and we’re like, let’s just let go and let God.”

It all added up to one of the strange moments that perhaps only “SNL” can create in the career of a young comic. “How did we stick the landing on that?,” Yang wondered. “It was just a lovely surprise that it even happened.”

For more from our conversation between Yang and Smart, click here, or watch the full video below.