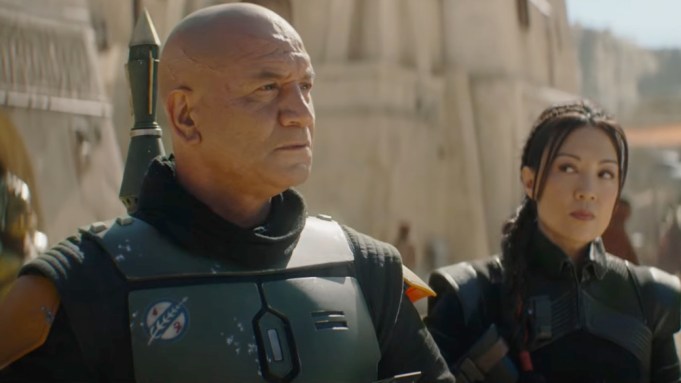 The first trailer for “The Book of Boba Fett” has dropped, with the Disney Plus series teasing the titular bounty hunter’s rise to prominence in the galactic underworld.

In the trailer, Boba Fett (Temuera Morrison) and Fennec Shand (Ming-Na Wen) set about establishing themselves as major players amongst the gangster of the “Star Wars” universe, using the palace of Fett’s former employer, Jabba the Hutt, as their base of operations.

One scene teases Fett and Shand being hired for a job by a mysterious Ithorian, while another shows them trying to rally Jabba’s former captains to now swear their allegiance to Fett. When one asks why they should not just kill Fett instead, Shand reminds them that such talk would have led Jabba to feeding them to one of his many pets. Fett says that “Jabba ruled with fear. I intend to rule with respect.”

“The Book of Boba Fett” will debut on Disney Plus on Dec. 29. Jon Favreau, Dave Filoni, Robert Rodriguez, Kathleen Kennedy and Colin Wilson are executive producers on the series. Karen Gilchrist and Carrie Beck serve as co-executive producers, with John Bartnicki producing and John Hampian as co-producer.

Morrison began his time in the “Star Wars” universe in the prequel film “Stars Wars: Attack of the Clones,” playing the role of Jango Fett. Jango was used to create the clone army of the Republic, thus Morrison would return to “Star Wars” in the film “Revenge of the Sith” as a number of clone troopers. He also lent his voice to multiple “Star Wars” games before returning as Boba in Season 2 of “The Mandalorian” to great fan acclaim.

Wen first played her character in Season 1 of “The Mandalorian” and provided the character’s voice in the animated series “Star Wars: The Bad Batch.”