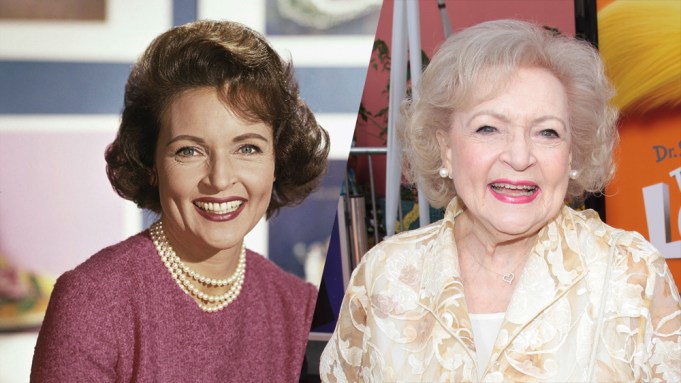 Betty White, the Emmy-winning TV star who had a remarkable later-career resurgence in films, TV commercials and the hit series “The Golden Girls” and “Hot in Cleveland,” has died. She was 99.

The Los Angeles Police Department responded to a death investigation on the 500 block of N. Carmelina Ave. in Los Angeles at 9:30 a.m. Friday morning. White would have celebrated her 100th birthday on Jan. 17. White is believed to have died Thursday night at her Brentwood home.

White’s agent and close friend Jeff Witjas confirmed her death to Variety. “Even though Betty was about to be 100, I thought she would live forever,” Witjas said in a statement. “I will miss her terribly and so will the animal world that she loved so much. I don’t think Betty ever feared passing because she always wanted to be with her most beloved husband Allen Ludden. She believed she would be with him again.”

Witjas emphasized that White had not been ill but had been extremely cautious during the COVID-19 pandemic. She spent most of the past two years at the home she loved with her many pets. She had round-the-clock caretakers in her final years, Witjas said.

White’s work schedule had slowed considerably as she reached her late 90s. She told Variety in an email Q&A in 2020 that her career blossomed in the early days of TV because she was fascinated by the medium. “I just love to work and the word ‘no’ did not exist,” White told Variety.

The approach of White’s 100th birthday sparked numerous tributes and appreciations of her long run in the industry. Just this week, White graced the cover of People magazine. “I’m so lucky to be in such good health and feel so good at this age,” White told the magazine. White was also the subject of a recent book by Variety alum Ray Richmond, “Betty White: 100 Remarkable Moments in an Extraordinary Life.”

White, who played Sue-Ann Nivens on “The Mary Tyler Moore Show” in the 1970s and Rose on “The Golden Girls” from 1985-92, was a staple on TV for more than 60 years, having started as the sidekick on a local Los Angeles daytime show that kept her on live TV five hours a day, five days a week.

The energetic blonde with the honeyed voice and girl-next-door beauty was one of the rare performers to remain as popular into her nineties with new generations of viewers — thanks to reruns of “Golden Girls” — as she was in her sitcom heyday.

In her 80s, White was still stealing scenes in film comedies such as “The Proposal,” “You Again” and “Bringing Down the House,” as well as making regular appearances on late night talkshows, where she delighted audiences with her quickfire repartee with Jay Leno, Craig Ferguson and other hosts.

Her well-reviewed turn alongside Sandra Bullock and Ryan Reynolds in 2009’s “The Proposal” boosted her profile, and suddenly she was everywhere: starring in the well-received Super Bowl commercial spot for Snickers and hosting “Saturday Night Live” after a fan campaign to land her the job started on Facebook (White had actually been offered the gig years before but turned it down).

She was hired by producers of “Hot in Cleveland” for a guest shot in the pilot but was quickly pressed into service as a series regular. “Cleveland” was an instant hit thanks in no small measure to White’s star power. She earned SAG Awards for her work on the show in 2011 and 2012 and her 17th career Emmy nomination.

The hits she had in the series department were giant ones and made her a household name. Her characters on “The Mary Tyler Moore Show,” a homemaker with a rather saucy reputation, and on “Golden Girls,” a rather befuddled simpleton, were part of television history. Both programs brought her Emmys, two for “Moore” and three for “Golden Girls.”

Born in Oak Park, Ill., she moved with her family to Los Angeles, where her acting aspirations began at Beverly Hills High School. Shortly after graduation, she made her professional stage debut as part of the Bliss Hayden Little Theater, of which she was a member for several years. She also did guest stints on radio shows such as “Blondie,” “This Is Your FBI” and “The Great Gildersleeve” before branching into early television. White made her first screen appearance, however, in the 1945 educational short “Time to Kill,” promoting the benefits of the G.I. Bill.

She then drifted into gameshows, including “To Tell the Truth,” “I’ve Got a Secret,” “Match Game,” “Password” and “What’s My Line?” White was also a regular on the nighttime “Jack Paar Show” and the syndicated woman’s daytime show “Girl Talk.” During that time she had her own radio show on CBS, “Ask Betty White.”

White had worked with “Password” host Allen Ludden and was appearing in summer stock with him in 1962 in “Critic’s Choice” when they became romantically involved; they married the next year. (White had been briefly married to Frederick Barker and to Lane Allen but had been single since 1949). They would co-star for years in summer stock in productions such as “Brigadoon,” “Any Wednesday” and “Guys and Dolls” as well as on TV on “Password.”

In 1971, White, an animal lover, had a talkshow called “The Pet Set,” about celebrities and their pets. (She later wrote the book “Betty White’s Pet Love.”)

White was a friend of Mary Tyler Moore when Moore’s producers were looking for a regular like Cloris Leachman. The character of Sue Ann was created with White in mind but offered to several actresses before the producers decided to go with White (who claimed, perhaps rightly, that for a time her gameshow persona was so ingrained in everyone’s mind that she was ignored for other acting jobs). The character of the Happy Homemaker, who always had sex on the brain, was an instant success and brought her back-to-back Emmys as supporting actress in 1974 and 1975.

After the Moore show ended, another series was developed for White in which she co-starred with Georgia Engel. “The Betty White Show” debuted in 1977 but was cancelled after half a season. She returned to gameshows as well as miniseries and TV movies like “The Best Place to Be,” “This Ring,” “Before and After” and “The Gossip Columnist.”

In 1983 she hosted another gameshow, “Just Men.” The show was panned but brought her another Emmy. She had a recurring role in “Mama’s Family,” a spinoff of a regular skit on “The Carol Burnett Show” in which Rue McClanahan also recurred.

Though she was originally slated for the role of the promiscuous southern Belle on “The Golden Girls,” she chose instead to play Rose, the slightly akilter but sweet-hearted character in the series targeted at an older demo (McClanahan got the Belle role). It was a huge hit running into the early ’90s and added two more Emmys to White’s shelf. She carried on for another season in the spinoff “The Golden Palace” and then segued into a regular role on Newhart series “Bob” and 1995’s “Maybe This Time.”

Television movies and regular guest appearances on shows as diverse as “St. Elsewhere” and “Suddenly Susan” kept White constantly in front of the camera, as did the occasional TV movie like “Weekend in the Country.”

In 1999 an appearance in David E. Kelley’s monster crocodile movie “Lake Placid” renewed attention on White: She lampooned her love of animals by playing a smiling but foul-mouthed woman who protects the predator that’s dispatching humans.

She was a television phenomenon in the 2000s, guesting as herself on “Ugly Betty” as well as in animated form on both “The Simpsons” and “Family Guy” and providing voices for many animated films and TV shows.

White recurred on soap “The Bold and the Beautiful” from 2006-09, on “That ’70s Show” and as Catherine Piper both on “The Practice” and on “Boston Legal.” In 2010 she became the oldest person ever to host “Saturday Night Live.”

In January 2012 the NBC special “Betty White’s 90th Birthday: A Tribute to America’s Golden Girl’’ was the most-watched program on the night. White hosted and produced the hidden-camera reality show “Off Their Rockers” in 2012-13, earning two more Emmy nominations.

Her most recent book, “If You Ask Me (And of Course You Won’t),” was published in 2011. She won a Screen Actors Guild life achievement award in 2010.

(Carmel Dagan contributed to this report.)