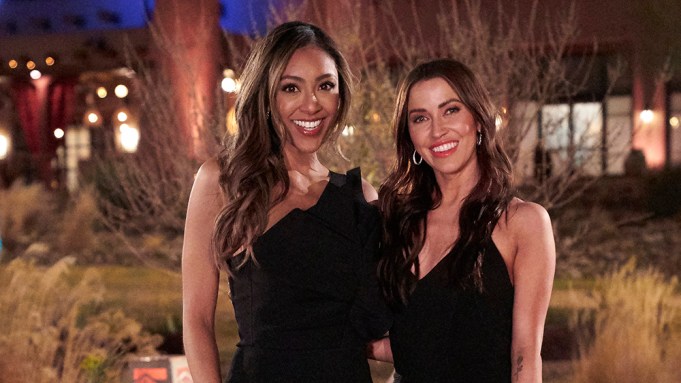 Tayshia Adams and Kaitlyn Bristowe were named temporary replacement co-hosts for Chris Harrison on the current season of “The Bachelorette,” as the longtime host stepped aside amid controversy in March. Harrison’s full departure from the franchise became official shortly after the new season premiered.

Now, the door is wide open for a new face of the ABC series. Bristowe tells Variety that they haven’t had any official meetings about future hosting opportunities, but both former “Bachelorettes” are interested in continuing hosting duties with the franchise.

“They haven’t, like, sat us down,” Bristowe says. “I think everyone wants to see how does this season go? What is going to happen next? I think we’re all just going day by day, at this point.”

Insiders tell Variety that there are no discussions about Adams and Bristowe filling the permanent role, but there is a possibility they could return to host the next season of “The Bachelorette,” starring Michelle Young, which heads into production later this summer and will premiere in the fall.

The host search hasn’t begun in full force yet. A well-placed source tells Variety it’s likely the new host won’t be named until the next season of “The Bachelor,” which heads into production in September and will air in January 2022. The regular players who would come to mind in Bachelor Nation — Emmanuel Acho or Rachel Lindsay are possibilities — will be taken into consideration.

Adams and Bristowe believe that there is an advantage to having a woman replace Harrison.

On this season of “The Bachelorette,” the co-hosts are able to apply their past experience as stars of the reality dating show to give advice to leading lady Katie Thurston, and bring a hands-on approach to their roles as mentors, even more so than hosts. (Adams starred as “The Bachelorette” in Season 16; Bristowe had the role on Season 11, then went on to compete and win Season 29 of “Dancing With the Stars.”)

“It is a lot to navigate in this entire journey, and I feel like it’s really nice to open up to other women that relate to you, as opposed to someone that might not understand what you’re going through or how you’re feeling and really give you sound advice that you feel comfortable opening up to,” Adams says. “The fact is we’ve been in her shoes, we’ve probably felt a lot of the same things she’s been feeling.”

As for Harrison’s departure, both women were shocked by the news.

“You know, I was surprised. We found out when everybody else found out,” Adams shares. “I think Chris has had an amazing run — 19 years on television — doing an amazing job. And so, I really just commend him for everything that he’s done and I’m excited to see what he does in the future.”

Bristowe agrees. “He’s made such an impact on so many people within the franchise. And like Tayshia said, he’s really committed to ‘The Bachelor’ world for almost 20 years. So I was a little surprised as well. Everyone’s gotta do what’s best for them.”

If the hosting offer ever does come their way, it’s safe to say both Adams and Bristowe would be very interested.

“I think I’m available,” Adams says with a laugh. Bristowe chimes in, “I can make myself available.”