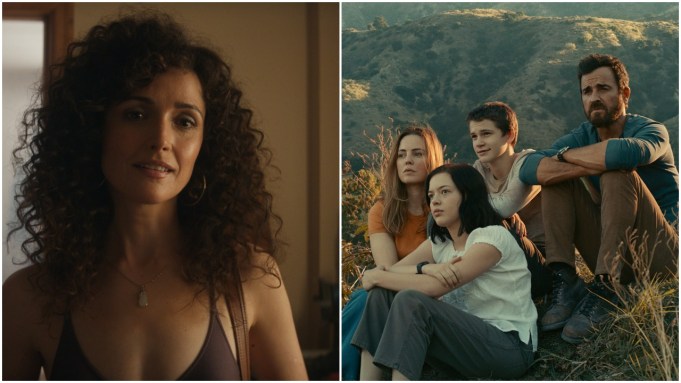 Apple TV Plus’ adaptation of Paul Theroux’s novel “The Mosquito Coast” will premiere on April 30, while the second season of “Mythic Quest” will launch on May 7. Additionally, three new series, “Physical,” a new 1980s-set dark comedy created by Annie Weisman and starring Rose Byrne; the adaptation of Stephen King’s “Lisey’s Story,” and musical comedy parody “Schmigadoon!” will hit the streamer this summer.

“The Mosquito Coast” stars Justin Theroux as a radical idealist and inventor named Allie Fox who uproots his family for Mexico after hey suddenly find themselves on the run from the U.S. government.

The seven-episode drama that also stars Melissa George, Logan Polish and Gabriel Bateman will be released on a weekly schedule, with two episodes dropping on April 30 and one episode dropping each subsequent week up to and including the finale on June 4. It is executive produced by creator Neil Cross alongside Rupert Wyatt, who also directs the first two episodes; Paul Theroux, Justin Theroux; Edward L. McDonnell, and Vertias Entertainment Group’s Bob Bookman, Alan Gasmer and Peter Jaysen. “The Mosquito Coast” is a Fremantle Production.

See below for a first look at “The Mosquito Coast.”

“Mythic Quest” Season 2 takes place in a post-COVID quarantine world, allowing almost all of the characters to return to the office and attempt to build upon the success of “Raven’s Banquet” with a new expansion. However, Ian (Rob McElhenney) and the newly promoted co-creative director, Poppy (Charlotte Nicdao), struggle with the game’s direction, while C.W. (F. Murray Abraham) reconciles some unresolved issues from his past, the testers (Ashly Burch and Imani Hakim) test the bounds of an office romance and David (David Hornsby) loses yet another woman in his life as Jo (Jessie Ennis) leaves him to assist Brad (Danny Pudi).

“Mythic Quest” was created by McElhenney, Charlie Day and Megan Ganz, who all executive produce alongside Michael Rotenberg and Nicholas Frenkel, Jason Altman, Danielle Kreinik, Gérard Guillemot and David Hornsby and Megan Ganz. The series is produced by Lionsgate, 3 Arts Entertainment and Ubisoft.

See a first look at “Mythic Quest’s” sophomore season below.

“Physical” is a 10-episode series that follows Sheila Rubin (Byrne), who is described as a “quietly tortured, seemingly dutiful housewife supporting her smart but controversial husband’s bid for state assembly.” Behind closed doors, however, Sheila is also battling a complex set of personal demons related to her self-image — until she finds release through the world of aerobics.

Sheila will first get hooked on the exercise itself, but her real road to empowerment comes when she finds a way to merge her new passion with the burgeoning technology of videotape, to start her own business. Set in the 1980s, the show will track Sheila’s journey from “stifled, overlooked enabler to a powerful, confident economic force” — aka a female lifestyle guru.

In addition to Byrne, of whom you can see a first-look, in-character image above, “Physical” stars Rory Scovel, Dierdre Friel, Della Saba, Lou Taylor Pucci, Paul Sparks and Ashley Liao.

“Physical” is produced by Tomorrow Studios. Weisman and Byrne serve as executive producers alongside Alex Cunningham, Marty Adelstein and Becky Clements. Additional executive producers who also serve as directors are Craig Gillespie, who directs the pilot, and Liza Johnson and Stephanie Laing.

“Lisey’s Story,” adapted from King’s 2006 novel of the same name, centers on Lisey London (Julianne Moore) as a series of unsettling events cause her to face memories of her marriage to her late, famous novelist husband Scott (Clive Owen) that she had deliberately blocked out.

See a first look at “Lisey’s Story” below.

“Schmigadoon!” stars Cecily Strong and Keegan-Michael Key as a couple on a backpacking trip designed to reinvigorate their relationship when they discover a magical town in which everyone acts as if they’re in a musical from the 1940s. Unfortunately for them, they also learn they can’t leave the town until they find true love.

See a first look at “Schmigadoon!” below.

Get a glimpse at Apple TV Plus’ upcoming lineup, including other new series “Foundation,” “Mr. Corman” and “The Shrink Next Door,” as well as the upcoming second seasons of “The Morning Show,” “Truth Be Told,” “Central Park” and “See,” above.