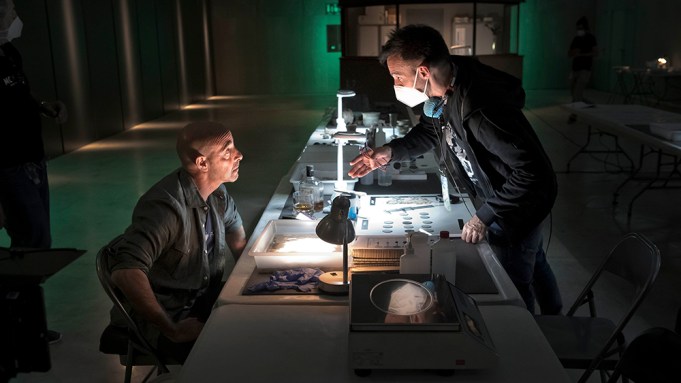 The on-set first-look comes as Germany’s Beta Film has acquired international rights to “La Fortuna,” which marks the first incursion into drama series direction by Oscar winning director Alejandro Amenabar (“The Others,” “The Sea Inside”).

An adventure series, based on the true-to-life discovery of the biggest sunken treasure of all time in 2007, “La Fortuna’s” two-minute making of video marks the first footage of any sort from the six-hour series, one of the most-anticipated TV shows from the Spanish-speaking world.

The teaser forefronts the cast, taking in high-caliber character actors such as T’Nia Miller (“Years & Years”) and Peters, as well as Tucci, who’s gaining heat for his performance in “Supernova.” The video also features two actors from Spain who have drawn warm notices for performances in recent series – Ana Polvorosa (“Cable Girls”) and Alvaro Mel (“A Different View”) – who share notes in a light-hearted scene in the making of.

Capturing on-set scenes from the first-phase shoot, which took place in Spain from early August through December at locations in Madrid, Cadiz, Guadalajara, A Coruña and Zaragoza, the featurette also confirms the series’ main narrative thrust.

Frank Wild (Tucci), a buccaneering treasure hunter discovers – and claims – the biggest shipwreck haul in history. That lies at the bottom of the Atlantic Ocean, inside “La Fortuna,” a Spanish frigate sunk by four British navy warships off the coast of Portugal in 1804. The treasure, however, a Movistar Plus and AMC Studios press statement countered on Thursday, is “stolen,” with Wild plundering items of “common heritage.”

Alex Ventura, a wet-behind-the-ears diplomat, is chosen by chance to lead a Spanish governmental mission to recover the treasure. As good luck has it, he is aided by Lucia (Polvorosa), a combative Spanish public official, and Jonas Pierce (Peters), described as a brilliant American lawyer with a passion for old pirate tales. The mission puts all of Alex’s convictions to the test, a synopsis runs, but it also frames, it adds, “the adventure of a lifetime, on which he learns about the importance of love, friendship and commitment to your own beliefs.”

The featurette also hints at the scale and energy of the shoot, made in collaboration with Spain’s armed forces and shot at one moment at Madrid’s Palacio de Moncloa, the seat of the country’s government. In one scene, Amenábar launches a drone from a ship to follow a police patrol boat. Another takes place at a military airport.

Five of the video’s first seven shots also show camera motion, as the camera dollies forward in one shot and glides behind the protagonists in another. That consistent movement, an Amenábar hallmark, does not come cheap, especially in series.

Movistar Plus is producing “La Fortuna” with AMC Studios in collaboration with MOD Pictures, headed by Fernando Bovaira, Amenabar’s producer since 1998’s “Open Your Eyes.” Bovaira and Movistar Plus’ Domingo Corral.

Amenabar shares screenwriting credits with Alejandro Hernández, who co-wrote with the director “While at War,” Movistar Plus’ first original movie, a box office hit nominated for an extraordinary 17 Spanish Academy Goya Awards.

The Movistar Plus original series will premiere next fall on its platform in Spain as well as on AMC and AMC Plus in the U.S., Canada and Latin America.

Beta Film, which signed a multiyear production-sales alliance with Movistar Plus in 2019, is handling world sales.

“Like so many others around the world, we were watching when Alejandro Amenábar so deservedly won his Oscar for ‘The Sea Inside,’” said Beta Film’s EVP Christian Gockel. He added: “So we’re all the more thrilled to bring to the world his first-ever series and his first teaming up with Oscar nominee Stanley Tucci in a tale of adventure, drama, romance and wit, a project we see as the temporary climax of our long-standing, extremely successful partnership with Spain’s Movistar Plus.”