Prince Harry Talks ‘The Crown,’ Stepping Back From Royalty, on Bus Tour With James Corden 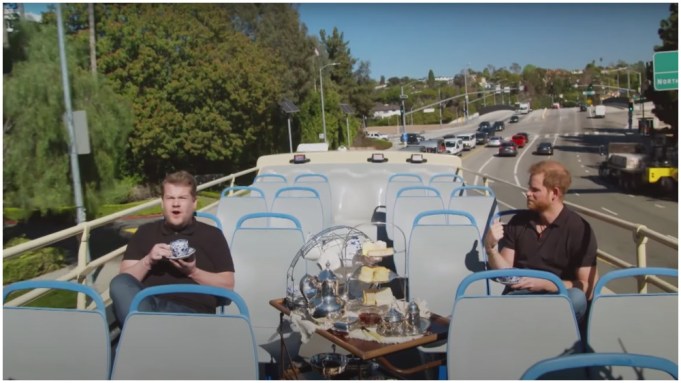 Prince Harry simultaneously laid on the charm and tackled serious issues in an episode of “The Late Late Show With James Corden” on Thursday.

The Prince spent an afternoon with his British compatriot Corden on an open bus tour of Los Angeles that was interspersed with stops.

When asked his opinion on hit Netflix series “The Crown,” the Prince said: “They don’t pretend to be news. It’s fictional, but it’s loosely based on the truth. Of course it’s not strictly accurate. It gives you a rough idea about what that lifestyle is, the pressures of putting duty and service above family and everything else, what can come from that.

“I’m way more comfortable with ‘The Crown’ than I am seeing the stories written about my family, my wife, or myself,” the Prince said. “That is obviously fiction, take it how you will, but this is being reported on as fact because you are supposedly news. I have a real issue with that.”

When asked who should play him in the series, the Prince named “Billions” actor Damian Lewis.

Prince Harry and his wife Meghan Markle recently relinquished Royal duties. Speaking about the decision, the Prince said, “It was never walking away — it was stepping back rather than stepping down. It was a difficult environment, as I think as lot of people saw. We all know what the British press can be like, and it was destroying my mental health.”

Calling the treatment “toxic,” Prince Harry said, “I did what any husband and any father would do. [I said,] ‘I need to get my family out of here.’ We never walked away. And as far as I’m concerned, whatever decisions I made on that side — I will never walk away. I’ll always be contributing. My life is about public service: wherever I’m in the world, it’s going to be the same thing.”

Corden took the Prince to see the house where “The Fresh Prince of Bel-Air” was shot and the pair rapped the theme song, before the host urged him to buy the house. Corden got Markle on a video call and tried to convince her to move.

The Prince also revealed that their son Archie’s first word was ‘crocodile’ and that The Queen and Prince Philip regularly get on Zoom calls to see their great-grandson.