Nokia Origin Story Chronicled in Series ‘Mobile 101’: Inside the Making of a Finnish Tech Thriller (EXCLUSIVE) 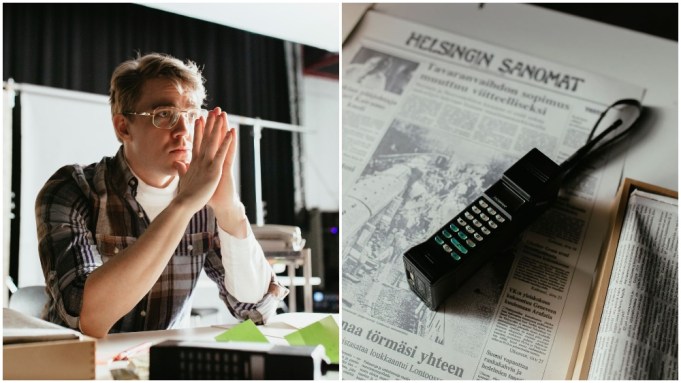 Almost anyone over 30 has owned a Nokia phone at some point in their lives, but not many people know that the iconic brand was created at a Finnish company formerly specializing in rubber boots.

Once the world’s biggest mobile manufacturer at the turn of the 21st century, the company was nearly wiped out of the smartphone market by Apple’s iPhone and Google’s Android well before 2010, and ultimately sold its handset division to Microsoft in 2013.

When news broke of Microsoft’s takeover on TV, Finnish director Maarit Lalli’s first thought was, “There’s going to be only one [drama] on Nokia in Finland: It will either be me or someone else, and it’s most likely going to be made by a man,” she told Variety during a set visit in Helsinki.

The next morning, Lalli called Finnish TV channels and the Finish Film Foundation to check if there was another project in the pipeline. When she realized there wasn’t, she embarked on what would be an eight-year process to make “Mobile 101” (“Made in Finland”), a sprawling six-part series that started shooting in April. The show is produced and represented in international markets by leading Finnish banner Rabbit Films, with crucial backing from broadcaster MTV3 Finland, which has made its biggest scripted investment to date. The channel’s streaming service CMore will premiere the series across the Nordics.

Though the project was initially developed as a movie, the extent of the “national trauma” of Nokia’s downfall and subsequent sale to Microsoft meant a dearth of funding from the Finnish Film Foundation, explained veteran Finnish actor-turned-producer Minna Haapkylä, who joined Rabbit Films in 2018 as head of scripted drama and helped Lalli develop the series.

Instead of jumping on the opportunity to make a controversial film emphasizing Nokia’s cataclysmic downfall, Lalli — who is described as fiercely determined and detail-oriented by several crew and cast members — took a different route with “Mobile 101,” opting to dedicate the first season to the origin story behind’s Finland’s crown jewel.

After all, Nokia’s story was not unlike that of many other tech companies in the early 2000s: It was good at manufacturing mobile phones but when phones became a mobile computer and an Internet platform, Nokia couldn’t adapt quickly enough to compete with the likes of Google and Apple.

Budgeted at €3.75 million ($4.23 million) and featuring 160 roles in total, the ambitious first season of “Mobile 101” goes further back in the story, zooming in on how Nokia switched from rubber boots to mobiles in the 1990s, told through the perspectives of the lawyers, engineers and executive management.

A top-notch key crew was enlisted to create a stylish series, from Heather Loeffler, the Oscar-nominated set designer of “Joy,” “Carol” and “American Hustle”; to Lalli’s husband Rauno Ronkainen, who is the cinematographer behind “Omerta 12/6” and “The Eternal Road”; and costumer Maria Sirén (“The Longest Day”).

Shooting such a large-scale show amid a pandemic has added an extra layer of complications around casting, leading producers, including Haapkylä, to volunteer as extras on some scenes. When Variety was on set, producers had dressed as Nokia staffers engaged in a team-building game dressed in funky 1980s outfits.

Setting “Mobile 101” in the late 1980s gave it a rich canvas because it shows how the company transformed Finland into a high-tech society and saved the country’s economy by creating thousands of jobs at a critical juncture that coincided with the collapse of the Soviet Union, explained Haapkylä, who produced the show with Rabbit Films producer Tiina Pesonen and CEO Olli Suominen.

The first season’s main plot revolves around a pair of rookie lawyers (Karhu and Kihlström) who were tasked with the daunting mission of defending Nokia against Motorola after the latter filed a lawsuit for patent infringement. The other two storylines follow Risto Salminen (Sipola), the genius Nokia engineer who developed the first GSM mobile phone, as well as the internal divisions and crisis within Nokia’s management board, including the company’s CFO Jorma Ollila (Sarkola) taking over the company’s leadership following the suicide of its CEO, Kari Kairamo (Salminen) in 1988.

“I wanted to hear everyone’s story, understand how the miracle happened, how they felt at the time and to get all different perspectives,” said Lalli, in between takes at a restaurant located near Nokia’s offices, which used to be a hot spot for power lunches during the 1980s and 1990s.

The director admitted she didn’t know much about Nokia before the show, apart from owning a phone and a pair of rubber boots from the company, so she played the part of investigative reporter. She read dozens of books and insisted on talking to the protagonists, notably Olli-Pekka Kallasvuo, who became CEO of Nokia in 2006 and led the company through the storm until he was ousted in 2010.

Nokia has been supportive of the series, allowing the production to use its logo, and granting access to legal documents and loads of VHS tapes, all of which were used by the actors and crew to plan locations and get makeup and costumes right, said “Mobile 101” producer Tiina Pesonen.

The director, who won three Jussi Awards (Finland’s equivalent to the Oscars) for her first feature film “Kohta 18,” said her primary aim with “Mobile 101” was to deliver a “realistic” account of what happened at Nokia and make people “laugh and cry.”

Citing Ruben Östlund’s “The Tourist,” Pedro Almodóvar’s movies and David Lynch’s “Twin Peaks,” Lalli said she wanted to “keep the tone light and alive but still realistic” and show that even characters with big responsibilities were flawed and therefore relatable. Lalli managed to gain the trust of Nokia’s former executives, including Olli-Pekka Kallasvuo, who, following a 90-minute meeting, allowed her to use their real names in the series.

While sitting in the board room of Nokia’s former corporate headquarters, Kallasvuo, who comes off as mild-mannered and unassuming, says he’s only kept positive memories of his 31-year tenure at Nokia, including four as CEO.

“I’m really grateful for that time in my life. The company was basically reborn and then went on to become one of the biggest companies in the world in a matter of 20 years or so,” says Kallasvuo, who still sits on Nokia’s board and recently released a book, “The Phone Rang at Night,” about his experience at the company.

“Thirty years ago, there were very few real global companies outside the U.S. The world was not as small as it is today,” he adds, noting that he and other Nokia top executives were perceived as “heroes” because they “brought so much new capital” into Finland, and raised its international profile during the tumultuous political context of the early 1990s. Jani Hartikainen, head of drama at MTV3 Finland, said the broadcaster quickly embraced Lalli’s vision for “Mobile 101” and made its biggest scripted investment to date with the show.

“‘Nokia’ is obviously a big thing in Finland and a lot has been said about it, but there’s so much behind the facade,” said Hartikainen. “My first [instinct was that it] couldn’t be a history lesson: People want to see good stories and something that touches them on an emotional level. So we wanted to bring that story with strong characters and tell it through their eyes.”

MTV3 covered more than 50% of the budget and some financial backing from Aurora Studios and Business Finland on board. Rabbit Films CEO Suominen said Hartikainen was so enthused by the project that he hardly had time to finish pitching it to him.

“The pitch to Jani lasted, like, seven minutes. We were having breakfast and then I pitched it in a couple of minutes and he was like, ‘Okay, I don’t know if you have anything else. I don’t want to hear it. I’m going to finish my breakfast now,” recalled Suominen with laugher.

Season 2, which will focus on Nokia facing off their American rivals, will require a more generous budget and the producers will likely leave the door open for an international partner to join early on. Lalli has already penned a 60-page synopsis and will soon put together a pilot. Considering how Nokia recently bounced back with 5G technology, there may even be more to tell beyond two seasons.