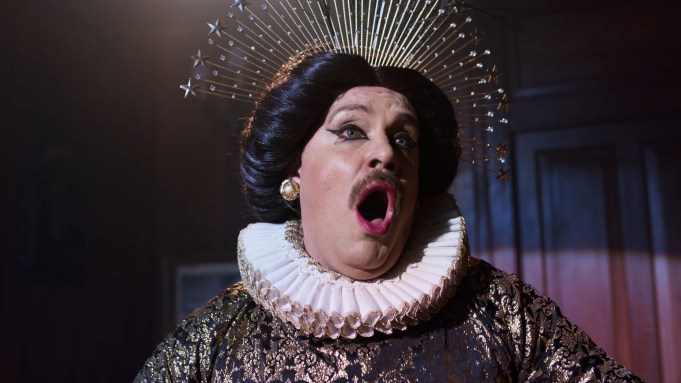 Netflix has set May 12 for the worldwide premiere of “El Baile de los 41” (“Dance of the 41”), the fact-based drama about the early 20th century scandal that rocked Mexican high society.

Penned by Monika Revilla and directed by David Pablos (“The Chosen Ones”), “El Baile de los 41” focuses on the 1901 scandal of the Ball of the Forty-One where police raided a private home in Mexico City and exposed various prominent society men in drag, including the son-in-law of the president of Mexico. Although the government tried to suppress the story, the local press gave it blanket coverage, marking the first time that homosexuality was openly discussed in the Mexican media and impacting the country’s culture for years to come.

In the trailer, which Netflix bows exclusively in Variety, it opens on an officer informing the president about 42 men caught in a raid. “I only count 41,” the president replies, signaling subsequent efforts to cover up his son-in-law’s participation. Meanwhile, his daughter pleads to her husband to at least keep up appearances.

Revilla had started working on the story six years ago under a government grant for young creative talent. “I thought it was important for new generations to be aware of this story, much of which was passed on as gossip through the years,” said Revilla, who has also co-written James Schamus’ upcoming series for Netflix.

Revilla and Pablos, who had previously collaborated on a series for Mexico’s Canal 22 in the past, decided to jointly present the project to Pablo Cruz of El Estudio, who loved it and agreed to produce it.

“It was important for me to make this film as LGBTQ representation has scarcely changed in the Mexican media and even in film and TV; there’s still a lot of discrimination, a lot of ridicule,” said Pablos. “This is a contemporary film despite its period setting,” he added.

“We wanted to change the way this story has been told, humanize the characters, show it from their perspective,” Revilla concurred.

“For all of us who have fought against patriarchy, this is a very important story; Amada, the wife, is a strong character and underscores the complexity of the story; she portrays another point of view of the patriarchy then, which was not only homophobic but deeply chauvinistic as well,” Revilla asserted.

“This incident paved the way for a more open debate on homosexuality. Before then, it was taboo to discuss homosexuality,” she said, adding: “But homophobia also emerged as a result.”

“El Baile…” was shot mainly inside the elegant Casa Rivas Mercado mansion, one of the few remaining mansions of that period in Mexico, which allowed a film to shoot there for the first time. Pablos worked closely with his DP Carolina Costa and production designer Daniela Schneider to transform the house with period lighting and a French eclectic style imbued with a strong Anglo-Japanese influence.

The drama had its world premiere at the 2020 Morelia Film Festival where it closed the hybrid edition on Nov. 1. Exhibition giant Cinepolis released it across the country for about three months but with the pandemic in full swing, few people were going to cinemas. “We expect it to have a bigger impact when Netflix streams it worldwide,” said Pablos, who is working on his first TV series, also in a period setting.