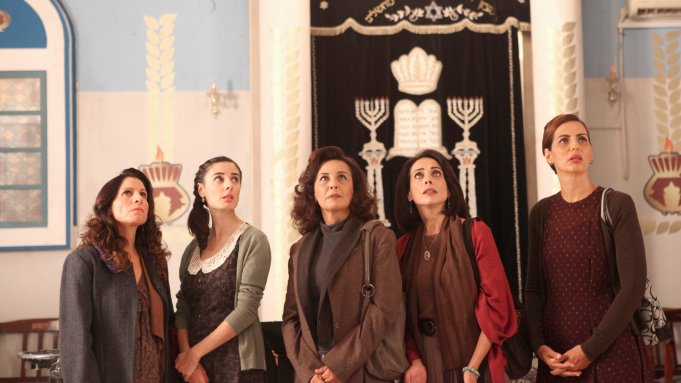 Keshet International has boarded “The Women’s Balcony,” a warm drama series based on the hit Israeli film starring Tshai Halevi (“Line in the Sand”).

“The Women’s Balcony” recently bowed on commercial TV channel Keshet 12 and garnered strong ratings, taking a 26.1% market share and becoming the second highest rated drama in Israel since 2015, after “Line in the Sand.”

The plot unfolds in a close-knit neighborhood of Jersualem which is under threat as ultra-orthodox sects try to impose their rules and restrict women in public spaces. Meanwhile, five women at the heart of the community each find themselves at a personal crossroads, as health, finance, political principles and grief mark the start of the next chapters of their lives. Yafit Asulin and Orna Banai, Assaf Ben-Shimon star in the series, along with Halevi.

The show is produced by Pie Films, whose credits include the original movie and their current pipeline boasts Maggie Gyllenhaal’s directorial debut “The Lost Daughter” with Olivia Colman and Nadav Lapid’s “Ahed’s Knee.”

“The Women’s Balcony” was released in Israel in 2016 and went on to become one of the top grossing films there in the last 20 years. It got a limited release in the U.S. where it ended up in the top five international movies of 2017. It was also released around the world, including in Spain, South Korea, Latin America and Australia.

“Following its box office success both in Israel and abroad, and seeing the way audiences fell in love with the women portrayed so warmly and authentically by the team at Pie Films, ordering a TV adaptation of ‘The Women’s Balcony’ to explore what’s next for the women of this wonderfully tight-knit community made complete sense for Keshet,” said Karni Ziv, head of drama and comedy at Keshet Broadcasting.

Keren Shahar, the COO and president of Keshet International, said the series “shows off another side of Israeli culture – a typically moderate religious close-knit community in Jerusalem – and captivates viewers with the compassion, respect and love its characters display for each other throughout. Shahar also described the series as the Israeli equivalent of “My Big Fat Greek Wedding.”

This original film had sparked heated debates in Israel about religion and extremism, as well as the role of women in the Israeli society. Shlomit Nehama, who wrote both the movie and the series, said the story was inspired by her own upbringing in a lovely community in Jerusalem which was taken over by religious Jews.

“‘The Women’s Balcony’ is all about promoting inclusivity and compromise. It’s almost a feminist statement,” said Osnat Handelsman Keren and Talia Kleinhendler at Pie Films.

“The women believe in respect – let everyone live their lives. They’re not looking to start a fight. This show is really about compassion, respect and how do you take care of each other,” added the pair.

The producers also said “The Women’s Balcony” was similar to “Shtisel” in its authentic portrayal of a “very specific type of Jewish life,” but seems more “more female driven, more moderate, less strict and orthodox” than in “Shtisel.”