ITV Journalist Who Covered Capitol Insurrection in Viral Footage Reflects on ‘Clear, Historic Moment That Needed to Be Documented’ 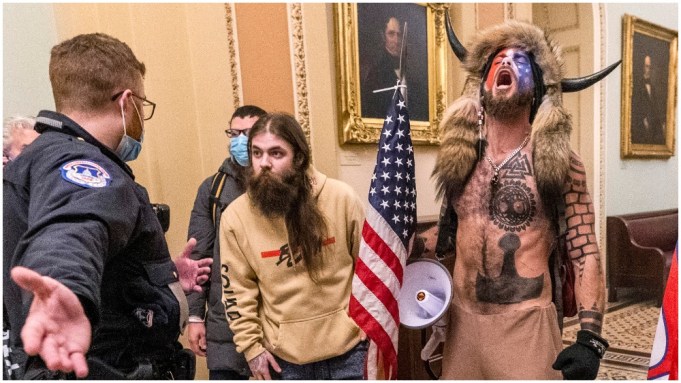 One month on from capturing exclusive footage of one of the darkest moments in American history, ITV News correspondent Robert Moore waits patiently in Palm Beach, Florida, for the former U.S. president to respond to his impeachment trial, which kicks off Tuesday.

“We’re waiting to see whether [Donald Trump] is going to break his long silence,” the British journalist tells Variety of his stake-out of Trump’s Mar-a-Lago compound. “He’s off Twitter, Instagram and Facebook, so we’re all wondering where he’s going to migrate his message, and whether he’ll try to stay relevant or stay out of the limelight.

“It’s actually relatively quiet,” says Moore, a veteran reporter for U.K. broadcaster ITV. “Quiet,” of course, is relative for Moore, who spent many years as a foreign correspondent in Moscow, covering the last days of the Soviet Union, before assignments took him to the Middle East and Africa.

For the last 15 years, he’s been covering news out of the U.S., but in many respects, he became the news on Jan. 6 when his team’s groundbreaking, seven-minute package out of the U.S. Capitol became the first piece of media coverage to emerge from inside the building.

Moore, alongside cameraman Mark Davey and producer Sophie Alexander, captured a smattering of Capitol police overpowered by throngs of single-minded rioters and insurrectionists. “What’s the purpose of storming Congress itself?” a masked Moore asks one man in a MAGA hat early in the segment. “Because they work for us! They don’t get to steal it from us!” he shouts in his face.

Another booms “We are protesting for our freedom right now. That’s the difference!” before storming away as Moore’s question trails, “What’s the purpose of storming Congress?”

Now, there’s a chance the footage from ITN Productions, the official producers for ITV News, may be called upon by the FBI as part of the org’s investigation of the Capitol Insurrection.

In an interview with Variety, Moore discusses his stance on potentially being forced to share the team’s rushes, whether being a British crew helped them stay safe inside the Capitol and how he managed to be in the right place at the right time.

When did you start hearing from your sources that this protest was going to happen?

We have been investigating far-right and white supremacist trends for much of 2020, and I’d already been hearing from some militia figures in Kentucky, of all places, that there would be a push to try and do something quite dramatic and visual in the days before [President Joe Biden’s] inauguration. In fact, a militia leader had said to me, “Don’t worry about the immediate aftermath of the election, worry about days before the inauguration,” so I I sensed something was going to happen that day. I’d put the bureau on a sort of red alert that it was quite likely there would be an attempt to breach Capitol security, and that allowed us to be in the right place at the right time.

Did it ever occur to your team not to follow the mob inside?

I do feel it sounds a little cliché, but I feel that ITV News, and British journalism in general, has one real strength, which is we have a journalistic culture and editorial instinct to believe in eyewitness news. So while the American networks — and I’ve got tremendous respect for many of their correspondents — in the U.S. cable TV ecosystem tend to go down the road of discussions, panels, analysis and live shots, what we do at ITV News exemplifies this. We still believe in eyewitness, frontline reporting — it’s our kind of calling card. When a moment like that happens, we feel like this is our moment to show viewers and take them with us; not by over-analyzing an event or over-reporting it, but taking them viscerally in with the crowd. So, we never hesitated to go in with them. We recognized there was some risk, but we calibrated that risk and felt it was a clear, historic moment that needed to be documented.

Do you think the fact that you’re a British crew made a difference?

Definitely, it makes a difference. A lot of that anger is aimed at [American] media outlets. Written on the walls of the Capitol building was the phrase “Murder the media.” But specifically, the anger is towards their own networks, and perhaps ironically, not just at CNN and MSNBC, but at Fox. So, it helps a little bit that we were British. I was working with an Irish cameraman and he was talking to the insurrectionists, saying, “I’m Irish, I’ve got nothing to do with this particular fight.” And I was making clear that I was British, and we were there just to be eyewitnesses. That seemed to distract them a little bit and they lost their interest in us. And we were able to follow them down the corridor, and even as they were shouting these slogans and insurrectionary thoughts around the place, I never felt our lives were in peril. I thought we might get hit by a flagpole, but I didn’t ever feel our lives were in danger.

As you were going through this, did you get a sense that it was going to become this seminal moment in U.S. history?

I did recognize immediately that what was unfolding was historic. And that’s because even though I’ve seen a lot of anger in America during the Trump years, on both sides of the political divide, I’ve never seen anything as furious as that. And the fact that it was playing out in the corridors of power, where I’ve so often walked along interviewing senators or members of the House, it did give it a sense of real historical significance.

What I didn’t know at the time was that [our footage] was kind of almost exclusive. I assumed there were other crews elsewhere around the complex, which is a huge building and over many, many floors. I assumed the other TV news crews were elsewhere in the building with other elements of the crowd. What I hadn’t realized is that we were the only group to have successfully breached the perimeter.

How long did you have to turn it around?

We were on air with our flagship news program at 10pm in the U.K. That’s 5pm [on the East Coast]. All of this was unfolding between 2:30pm and 3:15pm, so we had about an hour and a half to run back to the bureau, and edit that seven-minute report. The challenge is to edit nearly 60 minutes of footage within an hour, and also provide some editorial context to explain to people why this was historic.

Have you decided what you’ll do if the FBI asks for the footage?

We’ve decided to share the footage with the FBI and the Capitol Hill threat assessment unit, which is the team who are looking at the rioters and identifying future threats. We’ve shared the footage that we’ve aired, because obviously that’s in the public domain. What we will not do — and this is the same policy in the U.K. and everywhere around the world — is we don’t share our unaired footage; we don’t share our rushes with anybody, unless there is a court order, and we’ve had time to further consider it. If a judge requests it, our lawyers and editorial managers will look at that request. But as a default, we will never share our rushes because it’s important that our crews in the United States and around the world are not seen as on one side or the other. It increases the risk to their safety.

Are you expecting a court order?

I think that’s likely to come our way. But there is a tremendous amount of social media footage and people who were live streaming. So, in a way, there are hundreds of videos out there. I think what makes our footage unique is we were the only professional news crew to operate within the mall.

How do you see your job covering Washington changing under President Biden?

We’ll continue to try and track the kind of tribal nature of politics here. But going forward, our ambition is not to be a Washington bureau, but to be a kind of U.S. bureau. Just because there is a new president in the White House does not change the deep polarization that’s at the heart of American politics. It’s something I’m encountering even now, here in Florida, where many people are telling me that their loyalty still remains with Donald Trump. I spoke to people even yesterday who say “Joe Biden will never be my president.”

Meanwhile, what do you make of the launch of right-wing news outlet GB News in the U.K.? Some have said it heralds a “Fox-ification” of British news.

We welcome new competition. There is fierce competition between the BBC, ITV News, Sky News and Channel 4, and that competition has been tremendously healthy. We’re friends, but we’re also fierce competitors, and that’s done the British television viewer a tremendous service. Our television news content is as good as anywhere in the world, so we welcome new competition wherever it comes from. The only caveat is that it is clear for anybody who watches American cable TV news that it’s become fiercely partisan, and with that comes a kind of toxic political conversation. As long as all new entrants at least adhere to the same rules so that we’re hearing diverse news and the professional conversation on the airwaves is not toxic to the extent that there’s a degree of risk, then I think it’s fine.

Have you thought about how you might top the Capitol scoop?

I feel like a lot of reporters around the world do extraordinary work and take extraordinary risks. Even as I get a lot of praise, which is obviously very gratifying, I am trying to remember that there are reporters in Afghanistan and Syria, and in dire trouble spots all over the world, taking tremendous risks with their lives to bring news and the truth to you. I wouldn’t want my journalism to be elevated above theirs. If I can take anything from this story, it’s that journalism matters. Eyewitness reporting matters.