Titmouse Brings the Goods to Annecy 2021, Including First Ever U.S.-Produced Pre-Screening Short 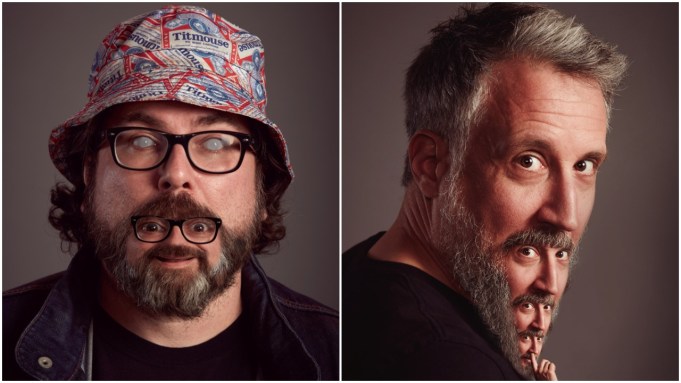 American animation studio Titmouse has a long and meaningful relationship with France’s Annecy Animation Festival. This year, the company has two productions screening in competition with several other projects being teased in various panels across the week. The studio was also invited to produce the festival’s introduction video, played before festival screenings, making Titmouse the first American company in the festival’s 60-year history to do so.

“We were supposed to do it for 2020 but it was postponed,” Titmouse CCO Antonio Canobbio told Variety of the historic partnership. “Mickael and Marcel always drop by when they are in LA and we usually grab tacos out of the taco truck next to the bar, The Three Clubs.

“They prefaced the evening by saying that they had an important question. It’s always kind of nerve-racking when someone tells you that they have something important they’d like to discuss. But they popped the question, I said, ‘Yes!’ and the rest is history!” he finished.

With the festival hosting guests once again this year, Annecy cashed in their rain check and worked with Titmouse on realizing the short. Sadly, with travel between the U.S. and France a difficult proposition, Canobbio and Titmouse founder-president Chris Prynoski, both long-time regulars of the lakeside festival, were unable to attend and see their work on the screens of Annecy.

COVID or not, travel restrictions or no,  “It hasn’t changed much as far as the content we submit. We do miss going to Annecy and interacting with all of our international friends and contacts! Also, you can’t get drunk at the Captain’s Pub over Zoom.”

On Monday, Netflix offered up early details and casting for two new upcoming series from its Adult Animation offices, including the hugely anticipated “Big Mouth” spinoff “Human Resources.” Both the Primetime Emmy-winning original and the spinoff are Titmouse productions.

During a Disney EMEA Annecy Studio Focus panel, the House of Mouse announced “Kiff,” a new kid’s series from South African creators Lucy Heavens and Nic Smal, to be co-produced with Titmouse and distributed by Disney worldwide in 2023.

A musical comedy series for older kids. “Kiff” follows its titular character, an energetic squirrel, and her bunny bestie Barry. “It’s about a kid who lives with her parents and goes to school, and the comedy is all in the tone and the characters that we’ve created,” Heavens explained.

“[The word] ‘Kiff’ in South Africa is slang for cool, awesome or rad, it’s the pinnacle,” Smal Said. “Like a good pair of blue jeans, it will never go out of style. That’s what the world needs. If the world comes at you with bad vibes and you show love and kindness, they got nothing.”

Another Titmouse production at this year’s Annecy was a stand-alone episode of Netflix’s “We the People,” backed by Barack and Michelle Obama’s Higher Ground. For the Bill of Rights-themed episode, Titmouse worked with Emmy-winning filmmaker Jorge Gutierrez and his partner Sandra Equihua.

“Working with Titmouse was great!” Gutierrez said enthusiastically during the presentation, emphasizing . We tried to get talent and immigrants from all over the world. I’d suggest a great artist from Colombia that I admired one week and be working with them the next.”

Titmouse has two episodes in Annecy’s TV Films in Competition section this year: “Children of the Night Serenade Wet Nurse of Reprisal – Scream Bloodsucker Scream!” from “Ballmastrz: 9000” and “What Sounds Like Thunder” from “Kinderwood.” The two couldn’t be much different, the former an off-the-wall adult-oriented action comedy and the latter a pre-school series commissioned by Noggin about a group of five kindergarten classmates. Both, however, live up to the Titmouse standard of quality, as evidenced by their inclusion in the world’s most prestigious competition for cartoon TV series.

Asked about the festival’s relationship with Titmouse, Annecy Festival artistic director Marcel Jean was effusive in his praise of the studio and its leading men.

“We’ve had a close relationship with Titmouse for many years. To my eyes, it is one of the most creative studios in the world,” he told Variety “The screening of ‘Nerdland’ as a Midnight Special in 2016 was one of the craziest moments in the history of the festival. Following this, Titmouse was the guest studio in 2019, when Chris and Antonio gave a masterclass. At this point, it was natural to ask them to partner for the 2021 festival trailer.”