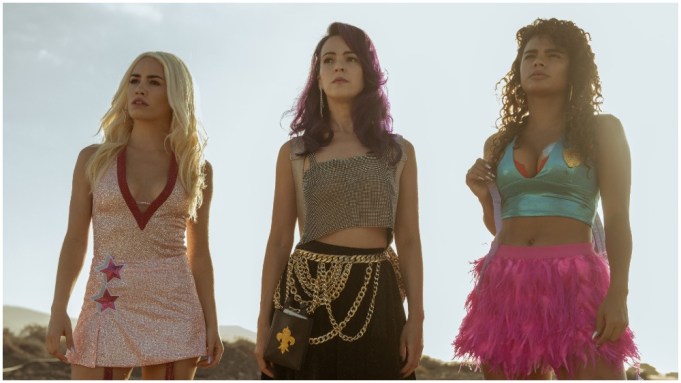 Netflix Spain’s most highly-anticipated series release of 2021, “Sky Rojo,” the new original from “Money Heist” creators Álex Pina and Esther Martínez Lobato, will launch worldwide on March 19. To celebrate the premiere announcement, Netflix has shared a new high-octane trailer sure to get viewers’ blood pumping.

Accompanied by a punk rock cover of Rosalia’s global mega-hit “Con Altura,” the trailer demonstrates how Pina and Martínez will shift away from the dark, almost noir aesthetics of “Money Heist” and embrace a drug-fueled, brightly colored, blood-spattered pallet for the new series in a mix of genres the two have dubbed “Latin Pulp.” One thing sure to remain however, is Pina and Martínez’s penchant for humor, evident in the trailer’s scant dialogue, limited to “Meow” and “Good boy.”

“Sky Rojo” is also a departure in format for the showrunners, who trade in the hour-long episodes of “Money Heist” for eight punchy, 25-minute episodes this time round, to be copied in the series’ already-confirmed second season.

In the series, the three female leads, exotic dancers at the Las Novias Club, team on a chaotic odyssey of escape packed with danger every step of the way. To survive overwhelming odds and murderous adversaries, the three must rely on their friendship and a shared strength that proves to be greater than the sum of its parts.

“We wanted ‘Sky Rojo’ to have the same frenetic action as always, but to use that 25-minute runtime to underline the dynamic nature of the plot: the getaway, the race for survival. The third act of a movie or an episode is where all the energy converges to produce the most vibrant explosion of all the conflicts that are being narrated. What we set out to do was to make a constant third act, to funnel our entire story through that frenzied energy,” said Pina and Martínez.

The series was filmed on location in Madrid and the Canary Island of Tenerife, with season two already confirmed at Netflix. It’s produced by Vancouver Media, with creators Pina and Martínez joined by Jesús Colmenar as executive producers. Colmenar is also part of the series co-directing team which includes Óscar Pedraza, David Victori, Albert Pintó, Javier Quintas and Eduardo Chapero-Jackson.