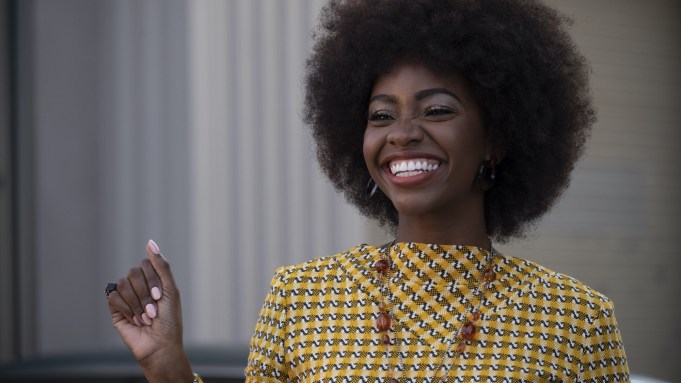 SPOILER ALERT: Do not read if you have not yet watched Episode 3 of “WandaVision,” streaming now on Disney Plus.

Teyonah Parris’s resume on both screen and stage is extensive, but that doesn’t mean the actor wasn’t a little trepidatious about taking on her most iconic role to date, suiting up as Monica Rambeau in Marvel’s “WandaVision” on Disney Plus.

“They are very big shoes to fill and I have truly been enjoying every moment of it,” Parris tells Variety. “It’s been such a collaborative process with the creative team figuring her out.”

In the series’ second and third episodes, audiences begin to learn that Parris’ character may not be what she appears to be. She was first introduced in the series as a woman named Geraldine, but after Wanda (Elizabeth Olsen) sends her flying through time and space, the actor’s role in the series seems more mysterious than ever.

So, what comes next for Rambeau? During the virtual press conference for the series, Parris teased that viewers would find out more about the character’s backstory via the series, discovering what happened to the young Lieutenant Trouble between the events of “Captain Marvel” in 1995 and those in “WandaVision.”

Over the years the Marvel comics character has gone by the superhero pseudonyms Spectrum, Pulsar, and Photon, and was the first woman (and the first African American) to take up the mantle of Captain Marvel.

Here, Parris talks with Variety about taking on this iconic role and what to expect from her in the next six episodes of “WandaVision” and beyond in the MCU on the big-screen.

You are embodying, not just any Marvel character, but the iconic Monica Rambeau. You’ve said that you wanted to be a Marvel superhero — what is it like stepping into those shoes?

Obviously, she’s iconic. She’s legendary in the comics, but the goal is to make her human — or superhuman in some cases — but to make her a real, live, breathing, three-dimensional person and that process has been a really intense one, but fun. I don’t want it to sound like anything crazy, but I take pride and I’m doing my best to really fill this woman’s shoes and step into who she is. Fans have loved her so much over the decades and just wanted to make sure I do my best to do right by Monica Rambeau.

What was it like collaborating with head writer Jac Schaeffer, director Matt Shakman and possibly “Captain Marvel 2” director Nia DaCosta? Who else was in that brain trust to help you work out the development of her story arc? Did you get a chance to talk with Brie Larson and Lashana Lynch about it too?

When I started to do my character work, I definitely went to the comic books on my own and I still am mining through who she was in the comics. And I also looked to Akira Akbar’s performance in “Captain Marvel,” and what she brought in. Obviously, as a child, when you grow, you change — you can be totally different than you were as a child. But I do think that there are elements of who we are as young people that remain with us. And not only that, but the relationships we have with those who are in our lives. So, the relationship she had with her mom, Maria Rambeau [or] Carol Danvers / Captain Marvel — how do those relationships influence her? And then on a more practical level, [producer] Mary Livanos, who is amazing — she has been an incredible wealth of knowledge. And she’s the keeper of all things comics, all things Monica, all things everything. So, I would always just go pick her brain. And then you have Jac, who — if anytime I felt like, “I’m not quite understanding this” or “It’s not really working in this way, how can we adjust?” — she was always right there. And the same with Matt. Matt is the most patient human being I have ever met; it is unreal. And he’s so kind. When I tell you that all the things that could happen on a set and go wrong, he remains so chill and so under control, and it was very amazing to watch. But he’s also a wealth of knowledge, as he comes from the sitcom world himself as a child actor. I am in very great hands. And it’s been quite a collaborative and fun process.

Seeing as we don’t know exactly where Monica’s story will end up, but knowing that she is the first female Captain Marvel, what would it mean to you to be able to suit up as that superhero?

Monica Rambeau has held many monikers over the decades and I think they’ve all been really special in a very particular way. I don’t know how or who she will be in the MCU. Because when I tell you, she changes names and she kicks butt in all of them. So, I don’t know who she will be in her superhero form. But I am excited by the thought of many of them.

You’ve talked a lot about representation and how meaningful it is to see Black women in these spaces — not just in the space of superheroes, but also in the sitcom spaces throughout the decades. What is something that someone has said to you about being cast both in “WandaVision” and “Captain Marvel 2” that has captured what that feeling is for you?

I think the thing that I hear most is usually from Black women who are excited to see images of themselves on screen. I definitely have gotten love from women in my DMs, where they’re just like, “I’m really proud of you and I’m really excited. And this is really necessary.” And I do agree that it is necessary, not only in the superhero space, but that it’s a larger representation. Although it’s a superhero fantastical [role], it still allows this Black woman to go into the homes of everyone, not only across the country, but across the globe. And I feel it does give audiences of all races, creeds, walks of life, an opportunity to engage with her humanity with the humanity of Black women. And that is so very important and I’m very honored and excited to be able to be a part of that process.