For the 2021 Power of Young Hollywood Issue, Variety profiled three young stars making an impact in the entertainment industry. For more, click here.

On HBO Max’s reincarnated “Gossip Girl,” Thomas Doherty plays Max Wolfe, a 17-year-old romantic omnivore who seduces all the boys and girls — and even a male teacher — at his Upper East Side high school. But on this day in late July, just a few weeks after the debut of his breakout TV role, Doherty isn’t kissing anybody.

The 26-year-old Scottish actor logs on to a Zoom call, dressed in a blue hoodie. His eyes are groggy; his voice sounds hoarse, and his words are interrupted by a throaty cough. Apparently not even our brightest TV stars are impervious to COVID-19, which Doherty contracted a few days ago — postponing our photo shoot and an in-person meeting.

Then he sheepishly admits that he hadn’t gotten vaccinated yet, because he’d heard about other people getting sick from their shots and he’s been working since last October, shooting “Gossip Girl” around the clock. “I was to go to coffee with you, and then straight after, at 6 o’clock, I was meant to get vaccinated,” Doherty says. “We booked it. And then I got COVID.”

But there’s no need to alert DeuxMoi. Like a storyline from the more inclusive and sexually adventurous — and decidedly nicer — “Gossip Girl,” this saga has a happy ending.

A week later, after two negative COVID tests, Doherty bounces back, appearing at a two-hour photo shoot involving multiple costume changes (including a throwback to Brad Pitt circa “Thelma & Louise,” with a white cowboy hat, sitting on a bale of hay) and an impromptu manicure where he paints his nails. He ponders a black polish before deciding on red — a better match for the sleeveless denim jeans vest that he dons without a shirt, showing off some of his 13 tattoos.

Among his cast of previously unknown 20-something co-stars, Doherty has been in the business the longest, and is perhaps the most recognizable actor in the group because of his days as a Disney Channel star in 2016. He’s enjoying the move to Park Avenue. With the help of “Gossip Girl” creator Joshua Safran, Doherty has crafted a leading man for Gen Z ¬— part old Hollywood, part polyamorous, with supreme confidence and nontoxic masculinity. His performance has put him on the map as one of the actors to watch in the 2021 TV season.

Max is a gleeful scenery chewer, both dramatic and bitingly funny, whose dialogue seems designed to go viral on Twitter.

During the actor’s audition, Safran noticed that Doherty was making the character too sinister, closer to Chuck Bass (Ed Westwick) from the original series. “I worked with Thomas in the notes session,” Safran says as he recalls telling Doherty: “‘Actually, this guy has more Cary Grant about him, like a rakish winking — you’re in on it with him.’ Once I said that to him, Max was born.”

Long before his shirtless on-screen bed-hopping, Doherty got his big break in 2016 at age 20 on the Disney Channel U.K. series “The Lodge,” after juggling odd jobs as a bartender and ringing up teen apparel at Hollister. He crossed over to U.S. tween audiences in the TV movie “Descendants 2” and its sequel, in which he played Captain Hook’s crooning son and, in real life, became part of a Disney couple, dating his co-star Dove Cameron.

“Disney is such a huge platform and there’s a lot of exposure, so it definitely gave me that,” Doherty says. “It was my first time on a movie set, which was really exciting.” The part earned him a devoted fan base — he now counts 4.4 million followers on Instagram. “Americans love Disney,” Doherty muses. “They go mad for Disney, so that was interesting: getting stopped on the street and asked for pictures and stuff.”

But he was ready to graduate to more serious material. Doherty’s first adult role arrived in 2020, in Hulu’s “High Fidelity” TV series. Although he appears in only three episodes, he made an impression as a musician who sleeps with Zoë Kravitz’s record-store owner Robyn Brooks. “I lived in Greenpoint [Brooklyn] when I was shooting that, so I knew I wanted to stay here,” Doherty says about his apartment. On his days off, he takes acting classes and rock climbs at an indoor gym.

The new “Gossip Girl” takes a more with-the-times approach to its young characters, portraying a world where not everybody is cisgender, white or straight. The plot follows Zoya Lott (Whitney Peak), a new student from a relatively modest background who, with the help of a scholarship, reunites with her queen bee half-sister Julien Calloway (Jordan Alexander). This time around, the identity of Gossip Girl is laid out upfront — it’s the school’s instructors, led by English teacher Kate Keller (Tavi Gevinson), using an anonymous Instagram account to keep their students in check.

Doherty binged the original “Gossip Girl” years after its run (he was too young when it premiered in 2007). “It wasn’t something that I would have ever watched when I was 12,” he says. “But then a couple months after, I heard that they were rebooting ‘Gossip Girl.’ I was like, ‘Oh, that’s cool. I wonder who they are going to cast.’”

Even the original actors might blush at Max’s script pages. His arc involves making out with his friend Aki (Evan Mock) in a steam room and having sex with Aki’s girlfriend, Audrey (Emily Alyn Lind), behind both of their backs. In another episode, after learning that his gay dads are on the verge of a breakup, Max goes on a bender, and is dropped off at school the next day in a car from Mount Sinai Hospital. He kisses a male and a female nurse on the street before stumbling to class. “I think I actually kissed about four of them,” Doherty says with a laugh. “They only showed two.”

Doherty is careful not to dish too many spoilers about the show. But the 12-episode first season, which is still filming, will have an intermission before the remaining six episodes air later this year. As a result, Doherty has had to shoot winter episodes of “Gossip Girl” in the sweltering New York summer. “I did a scene the other day, and I had boots on, trousers, a tank top, a shirt, a big jacket and a scarf,” he says. “And I was halfway through a scene and I was like, ‘Can we stop?,” because I could feel the sweat dripping down my face.”

He has worked hard to perfect his American accent and carry himself as a teenager. The first “Gossip Girl” aired on The CW, but HBO Max allows the new version to be racier. “I knew I was going to be naked,” Doherty says. “So I was like, ‘Do 17-year-olds have hairy chests?’ I can’t remember if I ever did.”

Doherty recalls a late-night shoot that made the real-life gossip pages. On his way from the makeup trailer to film a locker room scene, he opened his robe as a joke, flashing his abs and Tom Ford briefs. Only when it was too late did he see a row of paparazzi camped on the sidewalk outside. “I was like, ‘Oh fuck!’” Doherty says. “And they were like, you’re going to be famous tonight.”

Inhabiting Max has been an eye-opening experience for Doherty. “I have always seen sexuality as a spectrum,” he says. “But playing Max, a pansexual character, was incredibly liberating. It was very educational, and it definitely made me challenge my own preconceived notions, my indoctrination, of ‘This is who you love, this is what you do, everything else is wrong.’”

Like many of his age-group peers, Doherty says he doesn’t believe in labels. “I think it is very limiting, and I think as I get older and experience life a little bit more, you constantly evolve and you’re constantly growing,” he says. “I feel like labels limit you. They’re almost walls to your growth.”

Asked later about how he identifies, Doherty — who is reportedly dating model Yasmin Wijnaldum — says that he wouldn’t use a label to describe himself. “It’s just been girls,” he says of his romantic relationships. “That’s a preference. But 26, living in New York …” He trails off as he gives a devilish smile.

Unlike Max and the kids on “Gossip Girl,” Doherty isn’t one to live his life on the internet. “I’m not a huge fan of social media,” he says. “I don’t think it’s a very positive addition to the world, and I worry for younger people on it.” His interactions on Instagram are limited to posting pictures and DMing his fans back. He explains: “I actually unfollowed everyone on my Instagram because I was like, this is just noise. It’s counterproductive.”

Doherty’s career dream would be to make the leap to Broadway. And when he’s not filming “Gossip Girl,” he has been fine-tuning his theater chops. “I’m hoping to build some singing muscles and dancing muscles back up,” Doherty says. “There’s nothing better than the stage. It’s just so open and it’s free — and the energy.” What would be his dream musical? “I’d love to do ‘Next to Normal’ or ‘Spring Awakening’ before I get too old. And ‘Ragtime’ would be so cool.”

“He’ll be the next Hugh Jackman,” predicts Kenny Ortega, who directed Doherty in the “Descendants” movies and worked with Jackman on the Australian tour of “The Boy From Oz.” Ortega recalls discovering Doherty out of a stack of self-made audition tapes while casting Captain Hook’s son. “And about No. 36, Thomas appeared and just slayed me,” Ortega says. “He just had something rare. He reminded me of a young Christian Bale.” (Ortega directed Bale in the 1992 Disney movie musical “Newsies,” which has since become a cult hit.) 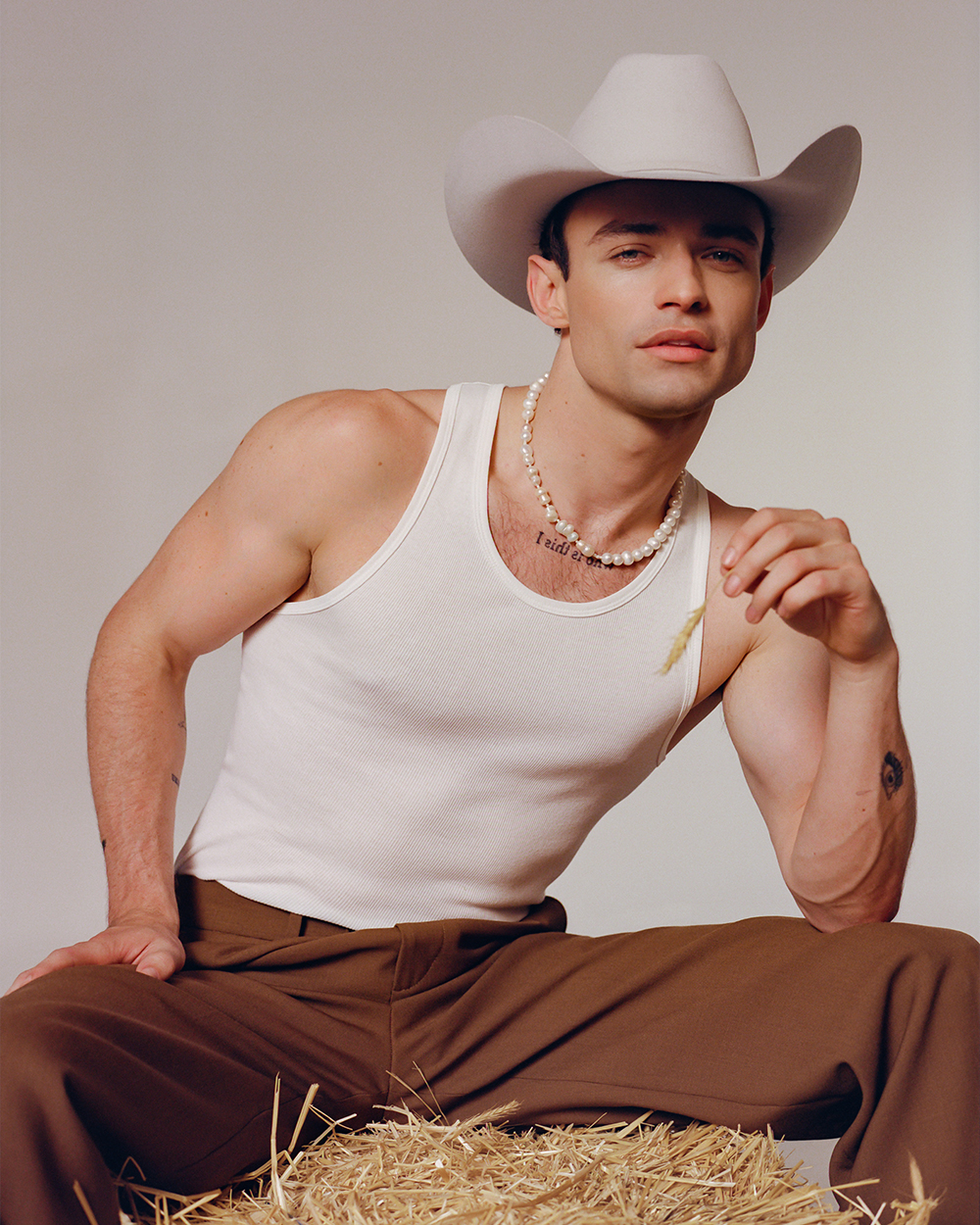 Doherty reveals that he auditioned to play Riff in Steven Spielberg’s remake of “West Side Story.” “I didn’t get that, and I was so sad,” he says. “That was the greatest heartbreak of my life. I just love ‘West Side Story,’ and I really, really wanted to do that.”

Back on “Gossip Girl,” Max will be the one breaking hearts, thank you very much. When asked how long he’d like to be on the show, Doherty deadpans: “You’re going to get me fired.”

“Honestly,” he continues, “I’m having a really good time. It’s so holistic in terms of acting. It’s a fun gig. I get to meet loads of cool people. I think three seasons would be cool.

Four, maybe? But who knows?” When asked for comment, Gossip Girl could not be reached.