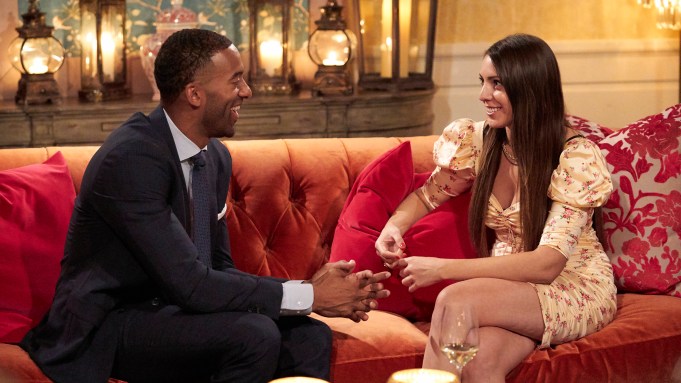 Between Clare Crawley and Tayshia Adams’ switch-up as leads on “The Bachelorette” and shooting seasons at sequestered resorts, Bachelor Nation has endured a fair amount of drama lately — but tonight, the new episode of “The Bachelor” will bring, yet again, another unprecedented shakeup.

For the first time ever, a limo full of five new women competing for Matt James’ heart will be introduced mid-way through the season. Though its par for the course for new men and women to arrive during the season on “Bachelor In Paradise,” never before has this happen on “The Bachelor” or “The Bachelorette.”

“We got a record number of submissions. We couldn’t fit everyone in night one, and we had some really interesting girls,” ABC’s Rob Mills, who oversees “The Bachelor” franchise for the network, tells Variety. “These were women that we had already met with. It was decided pretty much before filming began [that they would join later]. It was good to throw them in the mix. It wasn’t just to shake things up.”

Here, Mills gives an assessment on the season, so far, from Queen Victoria’s drama to Sarah’s shocking exit and Matt’s prayer.

Sarah was an early fan-favorite, a favorite of Matt’s and her storyline took an emotional twist, but she exited last week. Is there any chance we will see her come back this season?

Hopefully we will see her on the “Women Tell All!”

That was Katie’s idea. There are certain arrivals where people have a germ of an idea and the producers are there just to help out — it’s not like we decide that you’re going to be the person who shows up on the elephant. In this case, Katie had this idea.

Was there any pushback to the idea?

We thought it was great. Could you imagine if that wasn’t the case, and Katie came out and said in an interview that she didn’t want to do it, but the producers made her do it? That probably wouldn’t go over too well for us. [Laughs]

Another contestant who is getting a lot of attention, for better or for worse, is Victoria. The online chatter about Victoria has been nearly unanimously negative with a lot of people wondering if she’s the product of stunt casting — aka producers keeping her around for drama.

Before, we’ve had “shades of grey” villains, where you understand them more and there is maybe more sympathy for why they would do certain things. This is more black-and-white in that people just absolutely hated her. I totally get why that could be a turn-off to some people.

Can you tease how much longer she’ll stick around?

I can’t tell you. But she is still a contender. Hey, for all we know, she can end up with Matt. But I will say that whenever her time comes to an end on the show, it will be satisfying for everyone.

In general, how much do producers play a role in influencing a specific contestant to stay solely for drama?

You can’t have people who are not going to do really anything and will just be wallflowers. I’m not saying the show is made purely to stir up drama, but certainly a strong personality like that is good. And look, Matt has said that is something that he is attracted to — a woman who is her own woman and who is strong-willed — so you can’t argue that Victoria is not that.

Why was she cast? What about her seemed like she would be a good match for Matt?

We cast this solely for Matt and she applied, and she is somebody who was great in casting and certainly had a point of view that was interesting. Obviously nobody is mad that Matt is keeping her around, but at a certain point, if he really doesn’t see a future with her, he will send her home. I don’t think there is anybody that Victoria is taking the place of that Matt would say, “Oh my gosh, my future wife just walked out the door.” Although, I know how sad people were to see the ballerina go home night one.

One last question relating to Victoria: How do you come up with names like “Queen”?

We got to a place where we were going way too far in the other direction, and we sort-of scaled back. You have to really earn it now. If you’re giving everybody wacky job titles, that’s not great. When you have 32 women, it can help the viewer have more of a shorthand and then that’s a better way to go.

There were the most contestants than ever before this season with 32 women. That’s a lot of names for Matt to remember! Is a producer feeding names to Matt at the first rose ceremony? How can he possibly remember all of them?

For the rose ceremony, he will get some help. Nobody can remember all those names on night one. Matt knows every single thing about these people, and he makes his choices, but then he gets a little bit of help with the names because that is just too much for anyone to remember.

Another behind-the-scenes question that everyone always wants to know: Do any of the contestants have professional hair/makeup, or just the lead and Chris Harrison?

The contestants do not have professional hair and makeup until it comes right down to the end. I think it’s [for] the bottom three.

Back to the contestants: Who should we keep an eye on this season?

Bri, Abigail and Katie, they’ve all stood out for a reason, and they’re definitely ones that you want to keep an eye on. And certainly, Victoria is going to stir up things for a bit — and then there are more women who are going to enter the fray.

Abigail is making history as the first Deaf contestant in the show’s history. Is the franchise making an effort to be more inclusive, not just in terms of racial diversity?

We had Sarah Heron on years ago, and Sarah had a really interesting story that people still remember her because she was literally just like everyone else and she showed that to everyone, even though she had a disability. [Editor’s note: she was born with one arm.] It’s the same with Abigail. It’s great to tell these stories. If we can entertain but also back-door in more representation — not only with people of difference races, but also with disabilities — that’s great.

You also seem to have more international representation this season. Magi is a woman who grew up in a small village in Ethiopia. How did you meet her?

She came in through casting. I think we’re seeing people that we wouldn’t have seen before, through our diversity effort, which we all know was going to really take time to really bare fruit. This season of “The Bachelor” is where we are really starting to see people that we never would have met otherwise, and it’s so great that they’re coming on the show. Magi is someone who just applied on the show, and maybe she wouldn’t have as recent as last season when it was Peter.

In the first episode, Matt asked everyone to put their heads down and pray, and there was a lot of pushback on social media. Were you surprised by the reaction?

It was interesting that a hot button issue rose over Matt with the prayer in the first episode. I understand that he does ask everyone to put their heads down, but what you have to remember is that this is a guy who was thrust into this and had just met these women and is trying to process all of it. It was in no way trying to force anything on anyone. Certainly, if anyone had said they were uncomfortable with this, Matt would have said, “I totally get it.” This was in no way trying to be exclusionary. But it is interesting, and you can’t help but see that many people are saying that the majority of the stories on the show have been Christian, and it is something to think about, because it is really interesting when you get people who have stories and experiences that we haven’t seen before — that’s why Abigail’s story, I think, was so refreshing. “The Bachelor” is welcoming to all race and all religion. And religion is something we have to look at, in terms of that type of inclusivity, in telling those sorts of stories, as well.

How much will religion play into the season, since it is important to Matt?

It’s important to Matt and it’s been important to other leads, as well. It’s not a focal point. He has said that he was brought up and raised in a devout Christian family. Leading with the prayer was really interesting, but I don’t think it was a way to force religion on people. It’s just something that he does. Faith is very important to people, especially when they’re going through something that’s really exciting, or really trying, or important to them, and for Matt, I think that’s really what it was. But it did strike a nerve.