Tessa Thompson Delves Into the Subtext of ‘Passing’: ‘None of Us Fit Too Squarely in Boxes’ 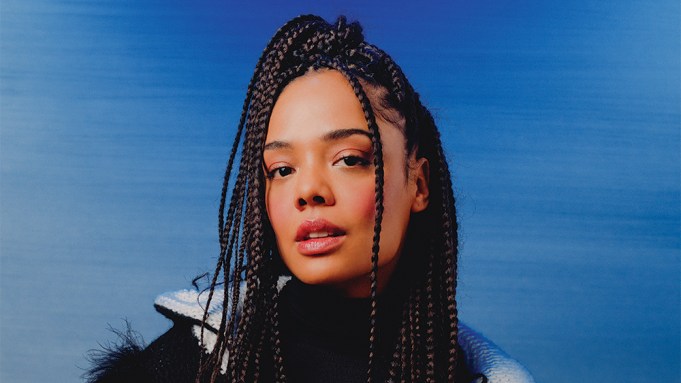 In “Passing,” Tessa Thompson stars as Irene Redfield, a Black woman living in Harlem amid the Renaissance, whose life with her doctor husband Brian (André Holland) and their two sons is turned upside down when she reconnects with Clare Kendry (Ruth Negga), a childhood acquaintance who’s since begun passing for white and is married to a wealthy (and racist) businessman named John (Alexander Skarsgård). The movie, which marks Rebecca Hall’s feature directorial debut, recently earned five Gotham Award nominations, including a lead performance nod for Thompson. Beyond her own acknowledgment, Thompson explains, those accolades represent something more. “It was so hard to get the film made because of the subject matter and because it’s shot in black and white,” she tells Variety. “When movies like this do well, all that does is make room for more stories like this to be told.”

“Passing” is based on Nella Larsen’s 1929 novella. How did reading her work prepare you to play Irene?

I engaged with Nella’s words almost obsessively, actually, while we were making the movie. Maybe for some people it feels liberating to not engage with the text that much or create a barrier between what you read on the page and what your rendering is going to be, but we were doing something that I felt like was a pretty dedicated adaptation of the book and trying to capture the same ambiguity and haunting nature of it, so I just thought, what a resource, because one of the challenges is there’s such interiority in the book. Even though it’s not written in first person, it’s entirely from Irene’s perspective, and while she doesn’t verbalize a lot of her thoughts and feelings, she has so many. So, I actually had passages of the book in the margins of my scripts. I found it really helpful in terms of understanding the things I was hoping to communicate. It felt like playing a piece of music.

You have a striking line of dialogue: “We’re all passing for one thing or another.” How does this story explore larger themes of identity — including some queer subtext?

Nella uses passing in terms of race as a metaphor for all the ways in which we pass: this idea of women having to pass for being entirely satisfied inside domesticity, which for many women isn’t the case; themes of sexuality, of repressed desire. Something that really stood out to me was this idea that none of us fit too squarely in boxes — that we’re bound to spill over when and if we allow ourselves full access to who we actually are. And when you add all the intersections of race and class on to that really very human thing that we tend to put on masks sometimes to survive, to find a sense of belonging, it gets complicated. What feels so incredible is that Nella was writing about that before there was language around intersectionality, for example. She was really ahead of her time and, in some ways, ahead of our time.

What did you make of the way director Rebecca Hall used black-and-white cinematography to illustrate this conversation about racism and colorism?

That felt paramount to me. I remember Rebecca calling — it had been some time since I’d signed on and we thought we were gonna go at a certain date and suddenly financing fell out — and saying, “If we were to make this in color, we could maybe make it sooner.” And I said, “I’ll wait. We’ll make this movie whenever we can make it, exactly the way you imagined it.” She was on page 10 of reading the novella when she started to imagined it in black and white. She also imagined it in 4:3 [aspect ratio] because she wanted to talk about the suffocating nature of the way in which society at large puts us in boxes.

One of the most shocking and standout moments of this story happens when Irene learns that John’s nickname for his wife Claire is “Nig,” revealing that he doesn’t know she’s passing for white. I couldn’t imagine how that would translate from book to screen — what scenes were you most interested in seeing adapted?

We got really lucky with all the men that are in our film. I think men in Hollywood aren’t often tasked with playing really strong supporting parts inside of narratives where women are protagonists and all of them really believed so heartily in Rebecca and were so supportive to us.

But for Alexander especially, it’s a really tough thing to do and play. Not that you feel for the man, but you understand he’s a product of his time, and as much as you can judge his choices or his language, if you’re gonna play a human being, you have to imbue them with a sense of humanity. And I was really excited actually, even though it was very hard to play the scene, to see Alexander do that because I thought it had a certain amount of bravery to it.

I was really interested in how Rebecca would adapt the end — how she would lens it. You make decisions as an actor around what your character’s doing, and there’s a little bit of ambiguity in the book. But the truth is, as an actor, you deliver a lump of clay and the editor and director sculpt it. So I might have one idea of what I’m trying to get across, but it can be lensed in an entirely different way. I felt protective over Irene and also protective over Rebecca having the ability to see how she sees and to let us see.

Tell me about working with Ruth. Rebecca has said that she had to find two actors that could kind of almost feel as if they could play either role because both of these women are so seduced by and interested in each other’s lives — how did you find that within each other?

That’s so interesting because Ruth actually said that recently, she was like, “If we were doing this as a stage play, we could do it in such a way that we’d trade roles every other night,” which I was like, “Oh that’d be so interesting.”

In a perfect world, I think there should always be a sense of symbiosis between two performers or an ensemble because your performances exist because of the other. Particularly in this one because Clare and Irene are two sides of the same coin, in a way. There’s something about Clare that is so beguiling to Irene. It’s the thing that they talk about when you play royalty — it’s the company around you that gives you a sense of power because their behavior should change when you walk into the room: They give you your power, you don’t play it. In that way, I felt really excited to get to play opposite Ruth because I knew by that camaraderie and the interconnected nature of our performances that I could also give her a sense of majesty in the way that I look at her by the way that I treat her.

I also had a sense — because there’s a certain real oppressive restraint to Irene, and so, necessarily, a restraint in my performance — that I felt very taken care of by knowing that Ruth would come in and add all of [the] electricity you want on screen. The nature of the film actually changes when she’s in it or when she’s not, and that allowed me to feel safe to be understated and to really play Irene with honesty. I really loved the ways in which it felt like we were dependent on each other. It makes sense that Rebecca would think it’d be smart to have two actors that can do both, because I think we both maybe understand the demands of the other, although I would never want to play Clare — I love Ruth in this part so much, I wouldn’t have done it.

You also executive produced this film and recently launched your own company, Viva Maude. Tell me about your transition behind the scenes.

I was listening to Rebecca talk about her journey as an actor into directing, and she felt like she always approached acting as a director, in a way. I can sympathize with that in the sense that I’ve always been interested in storytelling from a very macro perspective. I’ve always admired actors that felt very myopic in terms of just concentrating on their contribution — that can blur out all of the other distraction on a set and be really focused. I have always thought about the totality of what it takes to tell the story — the things that you both see on-screen and the things that you never see on-screen but are paramount to getting the thing made. So, producing has felt like a natural progression for me.

The aim of Viva Maude is to expand the aperture, to change who gets star treatment, to inspire new voices to feel like they have a home that’s safe where they can cultivate stories that they want to tell. We’ve been working in concert with HBO and HBO Max to produce original work there and have adaptations of a couple really exciting books that I’m happy to be speaking around. Our work in development, thus far, speaks to that — a project like “Secret Lives of Church Ladies,” where there will be a whole cast of brilliant, Black women who are all shapes, sizes, skin tones. We don’t get to see that often. It felt like an actionable way to contribute to the change that I’d like to see in Hollywood.

Things you didn’t know about Tessa Thompson:
Age: 38
Hometown: Los Angeles
Why Viva Maude: She named her company after the 1971 film “Harold and Maude,” which was initially dismissed by critics but built a cult following. The film became profitable in 1983, the year Thompson was born.
Up next: Reprising her role as Valkyrie in Marvel’s “Thor Love and Thunder”; currently filming Season 4 of HBO’s “Westworld”