How ‘Shadow and Bone’ Brought the Fold to Life, and Alina’s Power to Light 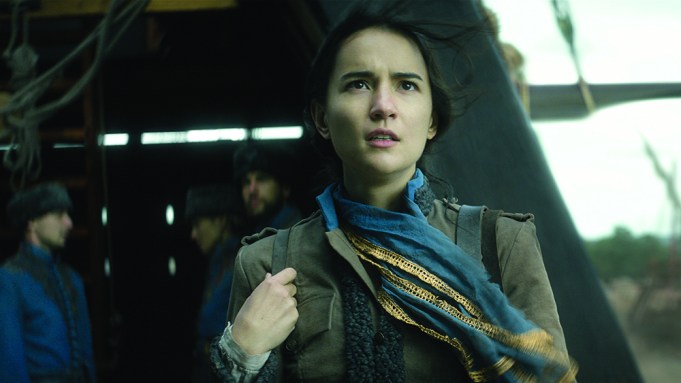 In the period fantasy world of Netflix’s “Shadow and Bone,” adapted from Leigh Bardugo’s best-selling book series, the country of Ravka is riven by a massive storm called the Fold, a blackened no man’s land populated by violent creatures called volcra. In the series premiere, two lowly members of the First Army — devoted friends Alina (Jessie Mei Li) and Mal (Archie Renaux) — venture inside the Fold on a skiff crewed by a team of Grisha, members of the Second Army who sport colorful tunics called keftas and possess supernatural powers (including shooting fire or controlling wind). While inside the otherworldly domain, the skiff is violently attacked by volcra, and just when all seems lost, Alina’s body radiates powerful light, revealing her to be the Sun Summoner — the Grisha who could finally bring an end to the Fold forever.

Eric Heisserer
Showrunner
“It is possibly the most important moment of the entire season. It chronicles [when] Alina’s life changes and the world changes around her. The ‘Shadow and Bone’ books are written in the first person, so Alina is very much our POV character. The important element was to keep us rooted in her. The goal for the latter half of the sequence is to show the chaos among the crew on this skiff, and the terror of being attacked from multiple directions from creatures in the dark. We spoke at length about how we didn’t want a copy-paste monster. So, we came up with various sizes, color patterns, and disfigurements on the volcra, so they all had individual characteristics. There were even a couple of young versions.”

Lee Toland Krieger
Director
“We want to experience the Fold for the first time with Alina. So, whenever possible, the camera is really anchored to her and witnessing the melee from her perspective. We tried to see this carnage unpacked in long uninterrupted takes, which meant a lot of choreography had to be in sync. We had stunt doubles in harnesses that were getting ratcheted off of the boat as if the volcras are taking them. We intentionally put these five days as my last of photography. It allowed us to do have all of pre-production to really dial the sequence, so by the time we got to the end of the schedule where we were shooting it, it was a fairly well-oiled machine. Actually, I found it to be among the easiest sequences from a technical perspective to do, largely just because every single department knew exactly what they were doing.”

Ted Rae
Visual-effects supervisor
“I didn’t want to shoot everything [on] green screen. I discussed with Lee and Eric the idea that we would shoot it in smoke. With David [Lanzenberg], the DP, we settled on a low level, directionless lighting. It meant that we weren’t fighting green screen spill and matte lines and so forth. When Alina’s powers manifest for the first time, you can’t look at examples of human beings lighting up from inside. So, we had to figure out how to bounce enough light off of her to light her from every direction so that she was shadowless. We shot bits of that three times. Eventually, way deep into post-production, we reshot those couple of shots of her lighting up for the end because we had done enough problem-solving in the rest of the series to figure out what it looks like when Alina lights up.”

Wendy Partridge
Costume designer
“We reproduced Alina’s uniform 100% top to bottom in an ivory version so that when they were blasting her with light, they weren’t trying to blast it against an olive green uniform. Shoes, the buckles, buttons, everything. So that was an extra little trick. Leigh Bardugo has an insane amount of information about the costumes in the books. She indicates that the embroidery on the keftas depicts what gifts the Grishas have. I did experiments [with] several different kinds of embroidery because it was such a huge job. Gold bullion had this beautiful relief, rather than the embroidery being embedded into the garment. It gave a sense of depth as well as texture. All of this was done by hand in India, individually. One of the things that I treasure about it is the fact that Gutter Credit they are not perfect.”