When Animal Planet first announced details for its 2021 Puppy Bowl, it started the discussion with, “We need puppies now more than ever.” After a year that included various levels of stay-at-home orders amid a global pandemic, the shutdown of productions and the postponement or cancellation of major live events — from concerts to sports — cries for social justice and police reform, and an extremely contentious presidential election, truer words may have never been written.

Producing the annual Super Bowl counterprogramming event did not come without adjustments, though — not only to make sure this year’s was “bigger, better, more dramatic” than ever before, says Animal Planet’s senior vice president of production, Erin Wanner, but also to keep the trainers, shelter representatives, celebrities and crew safe amid the ongoing pandemic. Perhaps serendipitously, some of the changes that COVID required ended up raising the bar for the quality and quantity of content the Puppy Bowl could deliver.

Historically, the Puppy Bowl has been filmed on a soundstage in New York City, with cameras only following the puppies and their “game” over the course of one day. This year, production moved to a stadium in Glens Falls, N.Y., and took place over multiple days in October 2020. While the move to such a larger space was initially “so we could socially distance with our crew,” Wanner says, it provided the opportunity to make the set bigger, lean into the arena style of real-life sports and include a “stadium-within-the-stadium effect with risers in the background,” and use a drone to capture additional action footage.

While the size and scope of the puppies’ playing field grew this year, the number of players actually shrunk. “We had only 22 shelters [involved] this year,” Wanner says. “They were able to bring 70 puppies, which was great, but we usually have more like 100.”

Wanner notes that they usually “pride ourselves on working with as many shelters every year as possible. We do background-check every shelter to make sure that they are following all applicable state and local laws, and have the right health requirements and all of that, but other than that, anybody who is a legitimate dog rescuer and wants to participate and help us find great puppies to play in the game, everybody’s welcome.” However, this year, health and safety guidelines required them to limit the shelters’ involvement to those within driving distance. “Some people drove 10 hours,” she recalls, but that still meant primarily working with East Coast-based groups such as Charlie’s Crusaders Pet Rescue, Danbury Animal Welfare Society and Operation Paws for Homes.

Knowing that they would have fewer puppies in play for the event didn’t change the casting process, though. As in past years, they still relied on photos and descriptions of the puppies prior to the shoot, looking for “a range of breeds and how they look, and [both] small and big” puppies, as well as those with a variety of activity levels. They get sorted into Team Ruff and Team Fluff based on the same factors, with the goal of creating a balance so there is not one team stacked with “ringers,” Wanner says. It was not until the puppies arrived at the stadium that producers and trainer Victoria Schade really saw how they would engage with each other to determine the right mix to play together.

“It’s an iterative process as we’re shooting,” Wanner says. “We sit there and wait. Oftentimes if a group of puppies isn’t performing or doing a ton of interesting stuff, we’ll swap them out and give them a break. [Victoria] works with us for the whole shoot and she’ll go up there and squeak some toys around to try to get them to jump around. So we do some things to try to get the energy going, but we have to wait to capture the dogs doing what they do.” 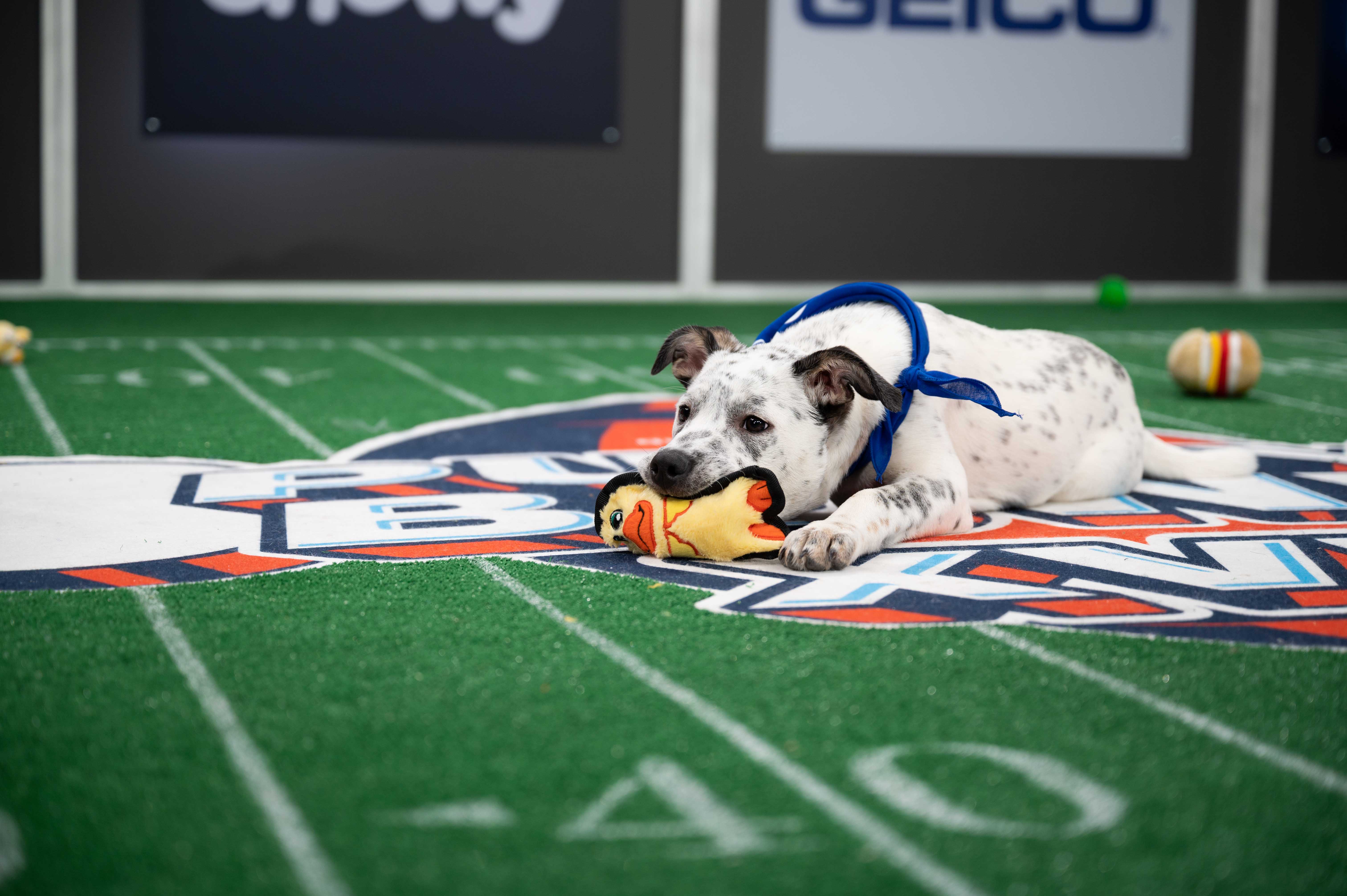 Wanner still contends that capturing a dog sleeping or alone in a corner can provide just as fun content as watching one actually score goals, and Puppy Bowl succeeds when it includes all of those things. And this year, there is also focus on some puppies on the sidelines of the game: “This year our cheerleaders are also puppies,” Wanner previews. Victoria “was on set with them, trying to get them to jump around and dance around in tutus.”

Given the amount of action — and adorableness — these puppies provide, Wanner doesn’t think it will be noticeable that there are fewer than there have been in years past. But aside from the puppies as the main attraction, there are also more human talent participating in the Puppy Bowl than ever before. Dan Schachner is back for his 10th time as Puppy Bowl “rufferee”; actor Kristen Bell participates in this year’s Pup Close and Personal segments, which “go deeper on some of the dogs that we feature on the field,” Wanner explains; ESPN’s Steve Levy and SportsCenter’s Sage Steele join to provide analysis throughout the game; and Snoop Dogg and Martha Stewart are hosting.

“There are so many celebrities who are organically interested [in] and passionate about adoption and rescue. We think having humans involved who really love dogs is a plus,” Wanner says. “Having hosts this year is something brand new because we decided it was time to experiment, [but] we love their banter and the fact that they’re gently competitive with one another. The concept is that they’re watching along with the audience and commenting on how their team is doing.”

Although puppies are not susceptible to COVID, their handlers are, so the behind-the-scenes at the Puppy Bowl was less of an event this year than in the past, when members of the press would come, as would network clients and sponsors. The only people who were allowed to hold and pet the puppies, to slow the spread of any germs, were the handlers, Wanner says, which was rough — no pun intended — for a lot of the production staff who just wanted to cuddle an adorable puppy. (But for the record, she also says they tested everybody 48 hours prior to production and then again when they arrived to ensure everyone on set was COVID-negative.)

Despite having to sacrifice some personal time with the puppies, Wanner admits that she wants to use production elements from this year’s Puppy Bowl as a new template for the future. Most notably, she says, “I will be shocked, actually, if we go back to shooting on a soundstage.”

This year’s event is also three hours in length, and that means more time “on the field, with the puppies, really leaning into the story of the game,” Wanner says. “Every football game is a story, and you’re sitting on the edge of your seat waiting to see how it’s going to end, and when it was two hours, I feel like we weren’t with the puppies long enough because there were so many other things we wanted to do. This year we were able to dig in a little bit more.”

Additionally, shining a light on the importance of adopting and rescuing animals of all kinds, but especially dogs, is an integral part of the Puppy Bowl.

“For the first time ever, at the end of every act and as a way to work with some of the shelters who couldn’t come to Puppy Bowl this year, we’re going to profile puppies that are adoptable right now. We send them to our website if they’re interested in adopting that particular puppy,” Wanner says.

The 2021 Puppy Bowl airs Feb. 7 at 2 p.m. on Animal Planet and also streams on Discovery Plus.