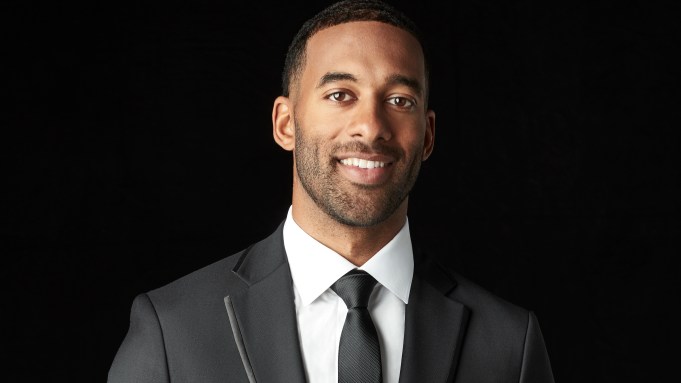 Matt James is the first Black lead of “The Bachelor.”

After nearly two decades on-air and 25 seasons of the flagship show, ABC’s hit dating series is hitting a milestone — and its star knows it’s a big deal.

“I felt that pressure — I’m not going to lie — initially,” James tells Variety about holding the title of the first Black Bachelor.

James is biracial, but identifies as Black. Growing up with a Black father and white mother, the 28-year-old North Carolina native says the way he is viewed in the world has resulted in him living his life as a Black man — and his life experiences will be similar to those of his future kids, which he hopes, are a result of his love story on national TV.

“The reality of this experience is that I’m hoping to leave with somebody, and with an engagement comes a marriage and kids,” James says. “And if our kids aren’t Black, they’re going to have some sort of pigmentation, so it’s a conversation that needs to take place because there are things that I’ve experienced that our kids are going to experience, and you’ve got to be ready for that. It’s just going to be a reality.”

Conversations about race are new territory for “The Bachelor.” The last season of “The Bachelorette,” which finished airing in December, featured a date where star Tayshia Adams spoke to contestant Ivan Hall about the Black Lives Matter movement — a first for the broadcast franchise.

James says his season with further discussions surrounding race and interracial relationships, and his hope is that those types of conversations will become more normalized, after millions of viewers tune in each week.

Here, James talks with Variety about the importance of representation in media, his identity as a Black man who grew up in a biracial home and what’s to come on his season.

Give me a little teaser on how this journey ends for you. Are you happy?

I’m excited. I’m very happy for everyone to experience what we all went through — myself and all the women — and to share that story with my friends and family is going to be very exciting.

I think that the theme for this season is authenticity and realness, and that’s where I’m at. And I’m very happy in that.

You’re good at this. You’re not going to give me anything, are you?

Well then, let’s get away from the spoilers. Tayshia’s season just ended, and one of the standout moments was her date with Ivan, during which they had a candid conversation about Black Lives Matter. How will your season address the conversation around race and what’s happening throughout the country?

It’s going to be talked about. Just in general, there’s no education without conversation. You can’t expect people to know how to maneuver, or where you’re coming from or to understand you, if you don’t talk about those type of things. So, we had some of those conversations, and they were positive because we made them positive. I’m excited to share that with people.

Can you speak more to how your upbringing, having a Black father and a white mother, impacted the man you are today?

It’s taught me to look for qualities instead of a physical experience. If people weren’t open to biracial relationships, I wouldn’t be here. So, my stance on that is different and my life experience is different because I’m the product of that, and I look at it differently than someone who’s never been in that type of relationship. I get it if someone is uncomfortable having that type of conversation, and I don’t hold it against them. I want to have it so that we can normalize that type of thing, and hopefully throughout this experience for me, it becomes something that people are more open to and it does normalize it.

When you were cast, the headlines — ours included — all said: “The First Black Bachelor.” But I want to make sure that we’re identifying you correctly, so do you identify as Black or biracial?

That’s a good question, and I identify as Black because I am. If you didn’t know me personally, you wouldn’t know that my mom is white. I don’t have a tag on my shirt or a sign on my head that’s saying like, “My mom is white.” If you see me, you’re like, “Oh, that’s a Black dude” [or] “yeah, that tall Black guy in my class.” It’s [not] like, “That biracial guy.” I don’t present as that. That doesn’t mean that’s not who I am, but I’m viewed and my experience has been as a Black man, and that’s what I am, regardless of my mom being white.

You want to normalize these conversations, and in some parts of the world it, it is normal. But this is a show on broadcast TV, airing across the entire country with millions of viewers, and you’re right: a lot of these conversations are not normalized. Has that dawned on you, just how big of a deal it is for you to have this platform and the impact that that can have on viewers at home?

It has. And I felt that pressure, I’m not going to lie, initially. And then, I just doubled down on the way that I was raised and my upbringing, and that’s what has made this so easy because I can only be myself. That’s all I know how to be, and I can’t be a version of myself that I don’t know. I can’t be a version of myself that someone wants me to be because that wouldn’t be authentic, and the theme for me this whole season was just to be real and be authentic, and that’s what I did.

I don’t know if it’s representation — it’s just more so someone that I admired and I wanted to be like and that was definitely like Will Smith, watching “The Fresh Prince of Bel-Air.” And watching “The Jamie Foxx Show.” Just two super talented individuals who I respected [because] they were in music, they were entertainers, they did comedy, they were so talented. Those are the type of people that I aspire to be like. When you mention representation, that’s what it looked like to me.

There is a lot of pressure that comes with the title of being the first Black Bachelor. When you were talking with network executives and producers about coming into this role, what were those conversations like?

It was just more so them getting to know me, because I wasn’t on “The Bachelorette,” I wasn’t on “Bachelor in Paradise” — they just genuinely needed to know about me. So, obviously, in getting to know me, they’re going to ask what I’m interested in and I told them there’s not a type that I have. Well, I do have a type, but it’s not race-specific. It’s character traits and it’s qualities that I look for that stand the test of time, more so than beauty does.

Your cast is the most diverse group of contestants the franchise has ever had. Did you have a hand in casting?

No — that added to the allure to me. They don’t need to be told how to do their job. I feel like I gave them enough to work with, and I was very pleased with all the women who were there. They beyond exceeded my expectations. You forget that women like that are single because they were so overqualified and never someone that I thought I would meet in this type of experience.

Taking a hard turn, I need to know if your friend Tyler Cameron gave you any advice?

Of course — Tyler is always giving me unsolicited advice. He’s always telling me stuff that I don’t want to hear! No, he did a good job. It was nice to have him to lean on because it was such a foreign thing for me, and I was trying to take advice from anybody that would give it, and him being someone who had gone through it, it was nice to have him in my corner. He just told me to be myself and remember where I’m at and not get caught up in the moment, and that’s what I tried to do.

Final question: if you could explain your season in one sentence, what is your elevator pitch for the viewers?

Don’t tell Chris Harrison, or he might have a new tagline.

“The Bachelor” airs Mondays at 8 p.m. on ABC. Watch Variety’s full interview with James above.