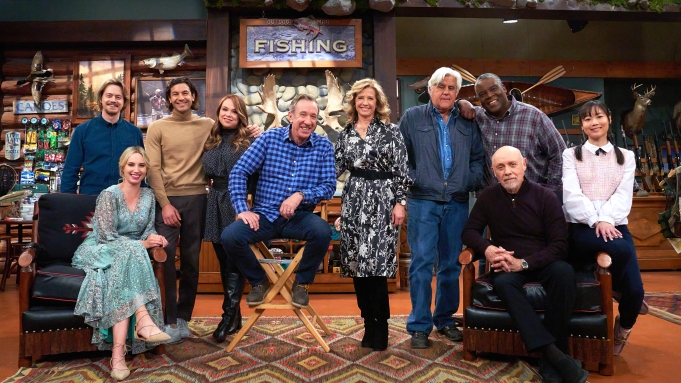 After 194 episodes, nine seasons and two networks, “Last Man Standing” ends its run on Thursday night with one more story that puts a bookend on the entire series. In the final two episodes, “Baxter Boot Camp” and “Keep On Truckin,” the Baxter family reminisces on some of their good times while camping in the backyard.

But then, later, they gather again after Mike Baxter’s (Tim Allen) beloved green 1956 Ford F-100 is stolen. And as Mike asks family and friends to one-by-one pay tribute to the truck, it’s clear what they’re really doing is saying farewell to the show.

“I adored this show, this cast, this crew,” Allen said. “I never had a bad day on the set, and it isn’t old hat… Of course, all of the actors are still alive and well and we can see each other whenever we want, but I have not fully recovered from how much I adored that world that we created.”

In figuring out how to end the series, executive producers Kevin Abbott and Matt Berry toyed with several ideas about characters leaving or saying goodbye. But each time they started to write those stories, it wound up feeling too sad. But then Berry came up with the idea for the truck, and using it as a metaphor for the show.

“I loved it, because it allowed us to tell a story that we would just tell but still leave room for the characters to be able to comment on the show closing, so that it wouldn’t be too sad,” Abbott said.

On the show, the truck is stolen right after Mike manages to get the original bill of sale, which was the last thing to make his restoration of the vehicle — which had been a presence on the show from the very beginning — complete.

“It was perfect and there was nothing left for him to do, and then at that point somebody takes it,” Berry said. “At first it’s like we got to get it back. But then the word comes through it’s gone. It’s been disassembled, chop shop, it doesn’t exist and then they have to go through the process of what that means. And while you watch Mike thinking he’s going to fall apart once this word comes through, it’s actually kind of interesting that Vanessa [Nancy Travis] does. She winds up having this reaction to that as Mike has peace with it, because of how much it meant to her as well.”

Allen said he found it difficult to shoot those final scenes even as other parts of the set were being torn down.

“It was horrific for me. I loved that set,” he said. “All of a sudden, you look around, Ed’s office is gone because ‘they’ve got to do it’ at 6:00 in the afternoon. They just put it in a van and carry it off wherever it goes.”

The finale contains plenty of winks at the camera regarding the ending of the show — including an exchange where Mike wonders why the security features on his truck didn’t alarm. Well, it’s because the truck was no longer on the network. Here’s that exchange, between Mike, Nancy and security expert Chuck Larabee (Jonathan Adams):

“Stupid network, stupid stupid network!”
“Maybe there’s another network you can find it on.”
“It’s not the way it works!”
“Actually I’ve heard of that happening before.”
“I’m not holding my breath.”

(Of course, that’s a reference to the show’s move to Fox in 2018 after ABC canceled the show.) Allen said he enjoyed what he called the “high wire act” of “Nancy Travis playing Vanessa Baxter and Tim Allen playing Mike Baxter and you’re doing the ‘Deadpool’ thing where you’re crossing the line.”

As “Last Man Standing” draws to a close, Variety asked Abbott and Berry to each select their definitive favorite episodes, for viewers who’d like to go back and rewatch or for newcomers looking for a primer on the sitcom.

“Bride of Pranksenstein” (Season 7, Episode 4)
As you’ll see from my subsequent picks, I’m usually drawn to the episodes with a little more emotional heft. Plus, I hated breaking Halloween episodes. But this one had so much fun throughout, with twist after twist, that when it finally landed with Mike confessing that Chuck was one of his best friends, it vaulted out of the “holiday episode” pile I would normally put it in to make the final cut.

“Three Sisters” (Season 6, Episode 12)
I picked this one for a very selfish reason. It was the first episode we shot after Matt Berry had left and I took over showrunning duties again. Matt was a fantastic showrunner, so it was important that we didn’t immediately plunge off a cliff. This one sailed through the week with very little rewriting and the actors all had a terrific time that week, especially with the family dinner scene that breaks down into chaos. It was a good start.

“The Gratitude List” (Season 5, Episode 9)
This one made it because the message of having gratitude is so close to my heart. And if I’m being completely honest, it’s really because of the final scene, when Eve recites why she’s grateful that she’s going to miss everyone so, so much — because the pain is just proof of how perfect it was — while making Mike and Vanessa stare at the floor so they wouldn’t look at her. Big funny and deeply moving at the same time. (More disclosure: I wrote the scene. Yes, I am that vain.)

“Polar Run” (Season 5, Episode 12)
Figuring out a way to make West Point’s rejection of Eve’s college application seemed like a no-win situation. Treat it with the appropriate emotional weight and people making jokes would seem callous; silly it up and it would betray the character who had dreamed of attending for the last several seasons. I thought this was a very clever solve. A show about Mike and Vanessa having a competition based on their own college loyalties for the first two acts, it takes a hard turn at the second act break and becomes entirely about Eve’s pain, and the parents who are powerless to help.

Episode 822 – “I Second That Emotion”
Before you thinking I must have lost it because that episode is not listed for the show, that’s because we never shot it. Okay, that sentence didn’t show I’m not crazy as much as I hoped it would. Episode 822 was going to be the season 8 finale scheduled to shoot March 16-17, 2020. COVID shut us down the night before. There were so many wonderful, funny and compelling moments in this one, culminating in Kristin naming the girl Evelyn in honor of Eve, moving her to tears. And to top it off, Kristin reveals her daughter’s middle name is Dana, the real name of her grandfather and Mike’s dad, Bud. It closed with Mike and Vanessa observing the close-knit family they raised gathered around mother and daughter and savoring a job well done. I swear, someday I’ll figure out a way to get this one to the public.

“Helen Potts” (Season 4, Episode 12)
The idea of having Patricia Richardson (Jill from “Home Improvement”) on the show had been tossed around since the beginning of the series, and we finally made it happen in this episode. The audience went wild when she appeared, and seeing her and Tim Allen together again was one of my favorite moments in my career. She is a delightful woman and a great actress and this was a memorable week.

“Trick or Treat” (Season 6, Episode 5)
What could possibly be more fun than to have each character in the show dress as a different character in the show for a Halloween party? And the cherry on top of this costume-party sundae was having Mike and Larabee both show up dressed as Donald Trump. Our hair and make-up departments were superstars for this one, and the cast had a riot trying to get down the mannerisms and speech patterns of one another. As actors, they found it exciting and challenging and we all found it a helluva lot of fun.

“Man vs. Myth” (Season 7, Episode 2)
I think this is my favorite episode of the entire series, and I think I’d still say that even if I hadn’t written it. The reason I love this one so much is because of how brilliant Tim Allen is as he deftly plays both comedy and drama (sometimes in consecutive minutes), in a show about the death of his father. A very powerful, yet funny, performance. Over the years, Tim has gotten a lot of deserved praise for his comedy chops, but in this episode you get to really see how great of an actor he is.

“Best Man” (Season 7, Episode 14)
I think one of the best decisions I made when I was showrunner was to bring on Jay Leno as a semi-regular character. He and Tim are tremendously close friends in real life, as well as being two of the titans of stand-up comedy. We always had fun when Jay was on the show. The idea in this episode was to have Jay and Tim both want the same thing — to be chosen as Larabee’s best man when he and Carol renew their vows. Having Bill Engvall in the show as the minister made this a mini-reunion of great comedy club headliners.

“Keep on Trucking” (Season 9, Episode 21)
This was the series finale, and we were wracking our brains trying to come up with something that hadn’t been done a hundred other times in the history of television finales. Once we hit on the metaphor of Mike’s green truck representing the show, all the pieces fell in place for us. The truck gets stolen and the whole family goes through something as they process that loss. You’re actually getting to see the cast go through the emotions of the series ending. This episode was also written by Tim Allen, which makes it even more special to all of us involved with “Last Man Standing.”