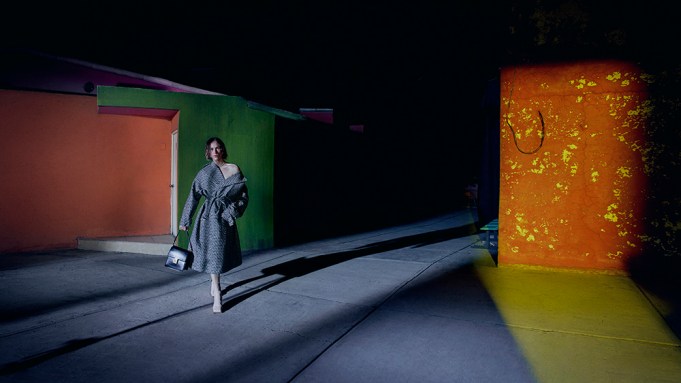 Created by Rousteing and his creative team at Balmain in partnership with Channel 4, the series will also serve as the debut of the brand’s Fall 2021 collection in lieu of a traditional seasonal campaign. It will launch globally on Sept. 2 at fractureseries.com.

“The fashion industry is in need of new narratives and new ideas. So, maybe it was the pandemic that pushed us — but for this year, my team and I were determined to break away from the pack,” Rousteing tells Variety. “It definitely seemed like the time to do something fresh. We spent a lot of time brainstorming and discussing the possibilities of innovative ways of showing the house creations and the ideal manners of reaching wider audiences,” notes the designer, who recently announced the second Balmain Music Festival, set to take place Sept. 28 and 29 in Paris.

Shot over a period of seven days between L.A. and Mexico in May, the highly stylized, five-part series “Fracture” centers on the Balmain-clad songwriter Mya (Stark), who tackles creative and family issues with the help of her equally fashionable sibling Ari (Dorfman), friend Edie (Russell) and poet Noa (Melton) — all against the backdrop of the rundown Le Rêve Motel on the outskirts of L.A.

Created by Michail Papadogkonas and Catherine Hope and directed by Bradley & Pablo, “Fracture” is written by Glenn Waldron and produced by Prettybird. Alya Nazaraly and Txampi Diz serve as executive producers.

Rousteing was committed to “an inclusive cast that reflected our world’s actual, real beauty,” finding his lead in Stark. “I was drawn to ‘Fracture’ because it was a combination of my first two loves: music and design, as well as acting which I’ve not gotten to explore that much but felt like a challenge I wanted to take on,” says the singer-songwriter, who also penned original music for the series. “The whole cast really connected, so it was such a surreal and special experience.  There was tons of energy and high spirits fueling the work, and every day was fun. It was like camp for misfits. I want to do it all again.”

Dorfman, who came out as transgender last month, saw it as an opportunity to “work with people who I have admired for a long time,” she says. “I love the intersection of fashion and storytelling,” adds Dorfman, who drew upon Ari’s dramatic sense of style to inhabit the role. “The padded shoulders gave me a sense of Ari’s confidence and bullishness; their ability to own any room they’re in.” Watching episodes of “Succession” also helped her get into character: “I dreamed up backstories of our family with Jesse Jo,” she says.

Rousteing, who previously chronicled the search for his biological parents in the 2017 Netflix documentary “Wonder Boy,” sees “Fracture” as part of his ongoing effort to challenge the boundaries of fashion since assuming the helm of Balmain 10 years ago at age 25.

“Storytelling is a key responsibility of my position. I know that I need to be thinking about more than just designing beautiful clothing and accessories. Weaving house creations into compelling stories is essential – since the best creations are those that inspire stories and new visions.”