Tokyo Olympics Get Off to a Somber, Unnerving, Heavily Branded Start on NBC 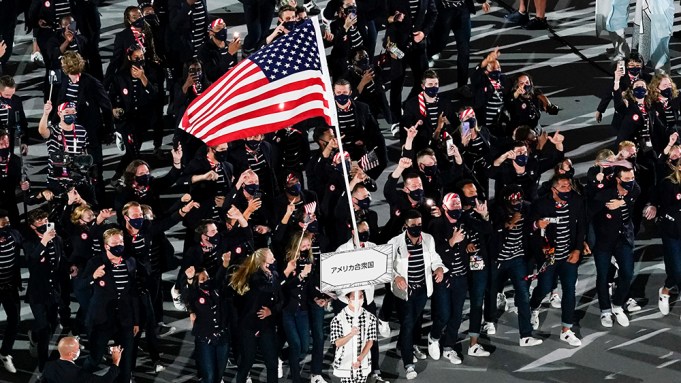 Despite all odds, an ongoing pandemic and almost definitely common sense, the Olympic Games kicked off in Tokyo on Friday to much fanfare, a practically empty stadium and a sizable anti-Olympics protest outside that NBC pointedly never mentioned during its many hours of coverage. Mired in controversy, and unfolding in a country struggling to keep its COVID-19 infections under control, these Olympics are truly unlike no other — a fact the ceremony conveyed both on purpose and quite accidentally.

Japan’s opening performance went out of its way to acknowledge the strange circumstances that led us to this moment, with modern dance depictions of athletes training on their own without much more than determination to guide them through the pandemic. It even paused to ask everyone watching to observe a moment of silence, both for the millions who have died of COVID-19 and the Olympians the world has lost over the years, including those from the Israeli delegation during the 1972 Munich Games. Whether by design or by necessary COVID-19 protocols, the fact that the downsized group of performers and the laser lights following them couldn’t take up enough space in Tokyo’s enormous new stadium only added to the event’s eeriness.

The performance eventually picked up the pace and vibe throughout the night, joyous tap dancing and Hiromi piano cameo and all, but the night ultimately retained a more solemn tone than celebratory. Not even the choral rendition of John Lennon’s “Imagine” — this is, incredibly, 100% true — could quite buoy the ceremony beyond its dire extra-textual circumstances, though the reveal that Haitian-Japanese tennis star Naomi Osaka would be the country’s final torchbearer came close.

Once the Parade of Nations started, it seemed like the event should be pretty straightforward from there on out. And yet, NBC went ahead and complicated it beyond logic and belief. As per the network’s tradition, breathless anticipation for the U.S. delegation ruled the day. The coverage sporadically cut to the team approaching the stadium and interviews with American athletes while other countries marched across the screen. Hearing NBC anchors Savannah Guthrie and Mike Tirico try to make smooth transitions to Team USA was typically painful, but it was the integration of onscreen ads during the Parade of Nations that left the worst taste.

When NBC first cut its coverage to a split-screen featuring a muted screen of athletes waving on one side and a blaring Walmart commercial on the other, it was almost too on the nose. During an opening ceremony trying to convey a sense of unanimous strength and spirit across the globe during an especially hard year, NBC’s commercial obligations nevertheless persisted, reminding everyone in the U.S. audience what really matters. Sri Lanka walked by to the tune of a Hershey’s ad; the Philippines, to White Claw Hard Seltzer; Egypt, to Walmart.

NBC undoubtedly sold these spots many months ago, but the network either didn’t realize how it would look, for instance, to score Gambia’s moment with a Chevrolet commercial about white guys fishing — or worse still, NBC didn’t care. Either way, this compromise of splitting the difference made for an unusually stark visual about exactly what the United States values most when it comes to the Olympic Games: the corporations sponsoring its coverage, and the United States.

So, yes, in theory, it would be nice to view these Olympics as a way to unite people around the world in pride and wonder after an extraordinarily hard time. In reality, that hard time hasn’t come close to ending, and at least in Japan as cases continue to spike, the Olympics aren’t exactly helping to change that. At the very least, watching athletes turn to an empty stadium and wave to no one while NBC blared an ad for Peacock felt exactly as dystopian as this moment deserves.